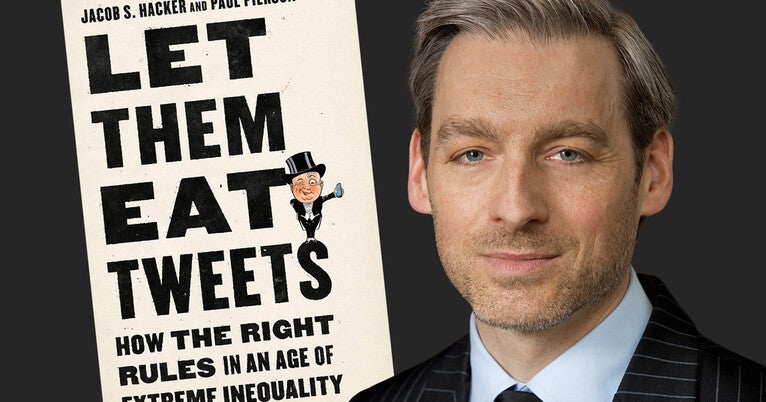 The 2016 election was a thrilling victory for the Republican Party, which seized the White House while maintaining majorities in both houses of Congress. Yet many of the economic and health policies the party champions in Washington have limited public support.

How has the GOP managed to hold power despite its unpopular positions? Yale political scientist Jacob Hacker argues that an unlikely but extremely effective alliance between plutocratic economic interests and right-wing populist forces allows the party to secure working-class votes while championing policies that favor corporations and the wealthy.

In their new book, “Let Them Eat Tweets: How the Right Rules in an Age of Inequality,” Hacker and co-author Paul Pierson of the University of California-Berkeley draw on decades of research to explain this political phenomenon and the threat it poses to American democracy.

Hacker, the Stanley Resor Professor of Political Science in the Faculty of Arts and Sciences, discussed the book with YaleNews. Interview condensed and edited.

You introduce the term “plutocratic populism” in the book. What does it mean?

Plutocratic populism describes how the Republican Party has combined organized money and organized outrage to win elections, tilt the playing field in their favor, and govern for the top 1%. In a nutshell, the party responded to skyrocketing inequality by siding with those at the top and, in the process, embraced a set of economic policies beloved by its big donors and big corporations but unpopular among voters, and even many Republicans. To pursue those unpopular priorities, the party created an infrastructure of outrage to attract voters in election after election. It partnered with organizations like the National Rifle Association (NRA) and Christian Right along with the increasingly powerful organs of right-wing media. Those two sets of forces — organized money and organized outrage — form the two sides of the contemporary party. It’s why we say that the party has come to exemplify plutocratic populism.

How does President Trump factor into the story?

This is not a book about Donald Trump. Most of these transformations took place before he came to power.

This is not a book about Donald Trump. Most of these transformations took place before he came to power. Indeed, we think these transformations made the party uniquely vulnerable to a leader like Trump. He has essentially doubled down on both the party’s plutocratic and right-wing populist sides. I’m reminded of the famous scene from “Spinal Tap” about the amplifier that goes up to 11. Trump turned the dial to 11 on plutocratic populism. But it was there before he ran for president.

When did plutocratic populism first arise in Republican politics?

Although plutocratic populism has its roots in Nixon’s Southern Strategy, Nixon was actually far to the left of contemporary Republicans with regard to economic policy. It’s really in the Reagan era that you start to see plutocratic populism forming. We discuss a 1983 memo by the late Lee Atwater, the hardball political operative who conceived of the infamous Willie Horton ad used against Michael Dukakis in 1988, which is now considered an exemplar of the use of the race card to win elections.

In 1983, Atwater was a young aide to Reagan when he wrote a memo to the president’s campaign essentially arguing that the president’s agenda appealed to country-club Republicans, but wasn’t going to be popular with enough voters, particularly in the South, to guarantee his reelection. Atwater argued that the party needed to attract what he called “populists” — voters who were to the left on economic issues, but to the right on social issues. By social issues, Atwater meant cultural issues like the Equal Rights Amendment and abortion, but also racial issues and civil rights.

Atwater’s vision for the party wasn’t fully embraced at first. Reagan started moving in that direction, but much of the party was still fairly mainstream. When Atwater masterminded the Willie Horton ad, he was working for George H.W. Bush, who represented the old guard of the Republican Party and famously raised taxes, despite a campaign promise not to do so, to reduce the budget deficit in 1990.

When did the party fully embrace plutocratic populism?

The first full expression emerges under Newt Gingrich, who basically took over the party within Congress and then took on George H.W. Bush over the 1990 tax increase. Gingrich built a massive money machine that allowed him and his successors, from Tom DeLay to John Boehner, to extract huge amounts of money from corporations. After they secured the donations, they let their corporate patrons craft legislation. Corporate lobbyists actually drafted bills in congressional offices.

Gingrich coupled this favoritism toward the rich and powerful with a much more aggressive, polarizing approach to politics, which led to another big innovation: leaning on right-wing groups like the NRA and the religious right and on right-wing media. Bill Clinton said that the NRA was the most important factor in Republicans’ capturing Congress in 1994. Talk radio also came of age in the 1990s, and after the 1994 victory, Rush Limbaugh was feted as the man most responsible for the Republicans’ sweeping victory. That’s the first election in which House Republicans won a majority of voters in the South. It was a tipping point.

You mention a “conservative dilemma” that led the party down this path. What is the dilemma?

[We] don’t view any of this as a conspiracy. Plutocrats aren’t Bond villains plotting world domination from their secret lair.

First, it’s important to state that we don’t view any of this as a conspiracy. Plutocrats aren’t Bond villains plotting world domination from their secret lair. We describe how the massive rise in inequality has created a new class of ultra-wealthy donors and advocates and enriched powerful corporations. These plutocratic forces then demand much more narrow, particularistic policies. This puts the party in a dilemma that conservative parties have found themselves in again and again. It’s how Republican elites resolved this dilemma that led to plutocratic populism.

How has it played out in the United States?

Our argument is that the steep rise in inequality after 1980 created a sort of conservative dilemma for Republicans in the United States. Essentially, there’s a growing tension between those at the top and the rest of society. It’s a tension between the goals of the plutocrats — the richest people, big business, and the organizations they create to influence policy — and the ideas that Republicans need to articulate to attract ordinary voters.

In particular, Republicans have become increasingly reliant on white working-class voters. These are Atwater’s populists. But to do so, Republicans basically divorce their economic policies from their electoral strategies. Those strategies rest more and more on radicalizing voters and getting them to see electoral politics as “us versus them” identity wars. They use racial imagery, demonize government and Democrats, and basically create a kind of tribal identity around whiteness, conservative Christianity, rurality, gun ownership, and the like. The goal is to shift the focus from the growing economic divide and instead incite outrage that reliably gets their voters to the polls but doesn’t challenge the party’s plutocratic aims.

In 2004, George W. Bush got 44% of the Hispanic vote. Why did the party abandon efforts to broaden its base demographically?

The Republicans’ failure to become a multiracial party after 2004 was key to Trump’s rise. Bush squandered the opportunity by essentially not pursuing any moderate economic policies that would appeal to Hispanic voters, who are interested in immigration issues, of course, but also tend to support policies to help aspiring middle-class citizens. Latino America soured on Bush primarily because of his economic policy stances and governing failures. In 2008 and 2012, John McCain and Mitt Romney drew a much smaller share of Hispanic voters.

After the 2012 election, the Republican National Committee produced a report called “the autopsy” in which they emphasized the need to appeal to Hispanic voters. Needless to say, Donald Trump took the autopsy and threw it out the window. But I think it’s important to understand that in doing so, he was basically taking the path of least resistance.

The plutocrats have pushed the party to a place where its economic policies are very unpopular, and so it has to lean into its strategies for mobilizing white voters. In essence, the Republican Party is in a race against huge demographic trends as well as the massive shift toward greater inequality and insecurity. This in turn forces party leaders to gin up the outrage machine more and more during every election. Trump was far better than his Republican opponents at operating this machinery.

I don’t think that you can understand the unquestioning loyalty of national Republican politicians to Donald Trump without understanding the extent to which Trump has used the outrage machine to unify the party’s dwindling but intense white voting base behind him.

Where is the party heading?

The GOP is on the wrong side of the two great trends of our era: rising inequality and changing demography.

The GOP is on the wrong side of the two great trends of our era: rising inequality and changing demography. The question is whether democracy can remain vibrant enough for long enough to discredit the party’s atavistic appeals. At the moment, it appears that the party is hurtling toward a severe reckoning in November.

We argue that the problem goes much deeper than Trump, and what’s happening now is quite likely to reoccur unless we deal with the underlying causes. And the key underlying cause is America’s uniquely high level of inequality relative to other rich democracies. At the same time, some of our political institutions magnify the capacity of the Republican Party to engage in these counter-majoritarian strategies. For example, the Senate is tilted toward low-population states that now lean strongly Republican, and this bias transfers over to the Electoral College.

We outline ideas in our book for serious political reform, such as making it easier for citizens to vote, tackling the outsized role of money in politics, and eliminating the filibuster, which allows senators representing just over a tenth of the population to potentially block legislation.

What’s at the stake for our democracy?

Republicans haven’t just deepened racial and cultural divisions that are deeply harmful to our society; they’ve also undermined democracy through extreme partisan gerrymandering and their adoption of various forms of voter suppression, as well as by not policing a president who has run roughshod over the boundaries of power. We’re not necessarily saying that our democracy is going to crumble, but we think that we face one of the gravest threats to our democratic system in at least a century. That threat extends to the fall because the guarantee of free and fair elections rests on both parties being willing to respect the rules. Our greatest fear is that this all leads to a continuing and significant erosion of American democracy.