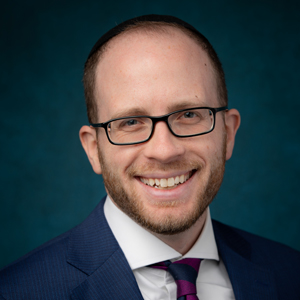 On July 21, 2020, Rabbi Dr. Stu Halpern, Senior Program Officer at The Zahava and Moshael Straus Center for Torah and Western Thought, delivered a shiur [lecture] titled “The Lion, the Pit and the Wardrobe: Daniel, Joseph, Esther and the Struggles of Being a Diaspora Jew” over Facebook Live and YouTube Live, which has since been viewed by over 400 people. The shiur was part of a six-part series presented by Mizrachi UK and Koren Publishers in anticipation of the Straus Center’s upcoming book, Esther in America, which explores the megilla’s interpretation in, and impact on, the United States.

As the title suggests, Rabbi Halpern’s shiur tackled the tension the Jewish people experience in living Jewishly in the Diaspora, the dispersion of the Jewish people beyond Israel after the Babylonian captivity. He introduced the biblical stories of Joseph, Esther and Daniel, all of which deal with Jewish heroes navigating life in the Diaspora, and the thematic and literary parallels between them. The Jewish heroes are in imposed exile in all three stories, and the text makes specific mention of the protagonists’ good looks. There is also a focus on non-Jewish names and much fanfare over clothing, specifically royal wardrobes. These and many other similarities in language have led scholars to suggest that the story of Joseph influenced Esther and Daniel’s writers.

However, despite their shared origin and parallels, the stories of Esther and Daniel come to radically different conclusions regarding how Jews should behave in the Diaspora. The book of Daniel seems to argue for an unapologetic, proud Jewish identity amidst the Diaspora. The non-Jewish characters are aware that the titular character is Jewish from the start: he is seen praying and facing Jerusalem and the Jewish God is mentioned throughout, including by the Median monarch. Daniel’s actions even eventually convince the ruling King Darius to praise “the God of Daniel.”

With Esther, however, the path for Jewish survival is less clear. Mordechai and Esther’s Jewish identity remains hidden for most of the story; their names are inspired by pagan gods and the Jewish God is never mentioned. The Jewish people are saved in the end not by an unyielding faith but by wily political maneuvering.

As Rabbi Halpern concluded, both stories wrestle with the legacy of the earliest story, that of Joseph: how to maintain one’s Jewish identity, survive and thrive while in a foreign land. Presenting poles of possibility, these ancient stories reflect current realities experienced by countless Diaspora Jews the world over, making their own daily calculations in their lives lived outside of the Promised Land.