But that was only part of the prize in this annual event. Undergraduates Baoluo Gao, Eitan Newfield, Andres Rugama and Charlie Thudium also seized the opportunity to be involved every step along the way, from the brewing to the canning, to sales and distribution — all of which they did with the assistance of the university’s Iron Brew partner, Sudwerk Brewing Co. of Davis.

“The Iron Brew competition is the only one we know of where we have support from a craft brewery to brew students’ recipe into a commercial beer,” said Glen Fox, Anheuser-Busch Professor of Malting and Brewing Sciences, who ran this year’s competition in Food Science and Technology 102B, his winter quarter course on Practical Malting and Brewing.

The verdict on the Gao-Newfield-Rugama-Thudium brew: best overall flavor profile and best balanced beer, as judged by brew masters from Sudwerk, Sierra Nevada and Lagunitas. “This is a very good, true-to-style ale,” Fox said. “It has a clean and fresh taste that is perfect as a summer beer.” 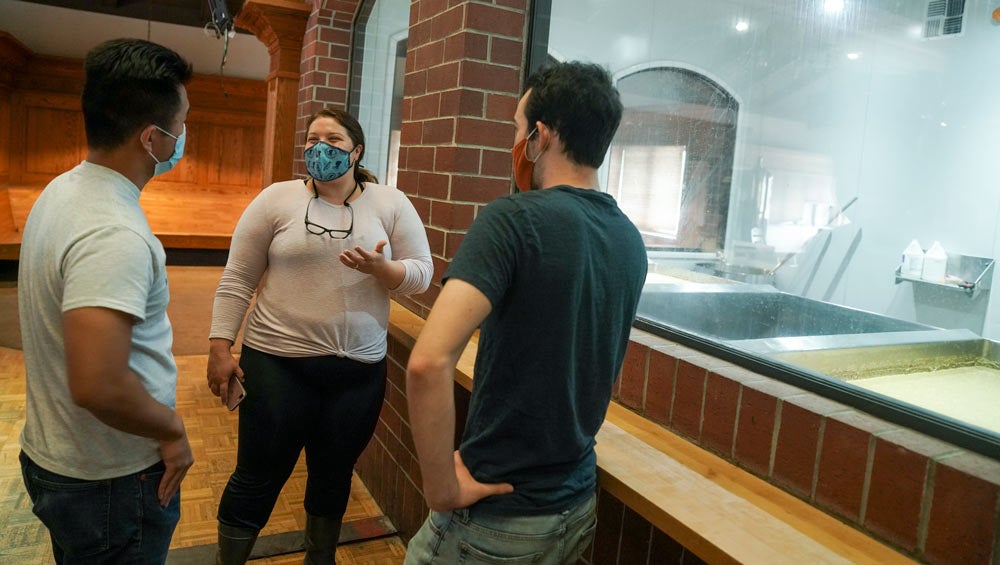 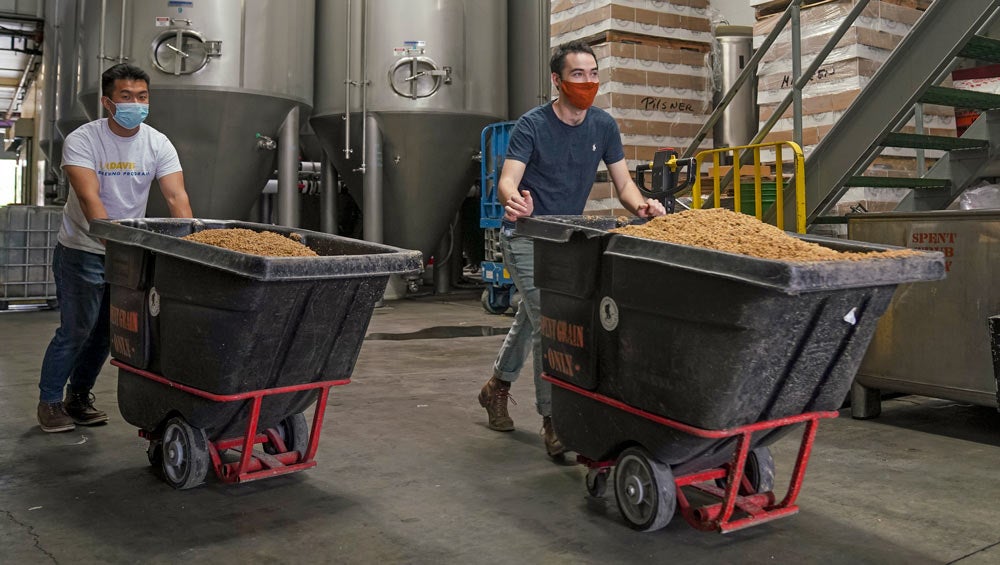 Gao, left, and Thudium cart out spent brewers grain from their ale — grain that will be supplemental feed for campus-raised cattle. Sudwerk buys the meat from those cattle, to serve through the brewery’s kitchen.

Students win with a special twist

Newfield, of the Caledonian Nights team, said: “We really wanted to pick a unique beer style that wouldn’t taste like any other beer that you can get at the supermarket.

“Charlie came up with the idea that an interesting style to encompass this notion would be a Scottish ale. I tasted that style while studying abroad in Scotland, and really enjoyed it, so I was fully on board with this idea.”

They gave their Scottish ale a twist by blending American hops and brewing creativity with Old World tradition.

Scottish export ale is not a very common brew style, Rugama explained, so the team chose a name that references Caledonia — a place name from the days of the Roman Empire, roughly corresponding to present-day Scotland — and embellished it with a riff off the Arabian Nights.

“The profile of this beer is earthy, it’s malty, it’s got some light sweetness to it,” Rugama said. “It’s very smooth. … I would say it’s chocolaty, or rich, but without being the same kind of richness you would expect from a porter or from a stout.”

With a deep crimson color, some people may perceive Caledonian Nights to be a “heavy” or “filling” beer, but it’s quite the opposite, said Trent Yackzan, co-owner of Sudwerk. “You will taste a robust, flavorful amber beer with a light and fast finish — it definitely tastes lighter than it looks,” he said.

Here are the stats for Caledonian Nights, as listed on the Sudwerk website: 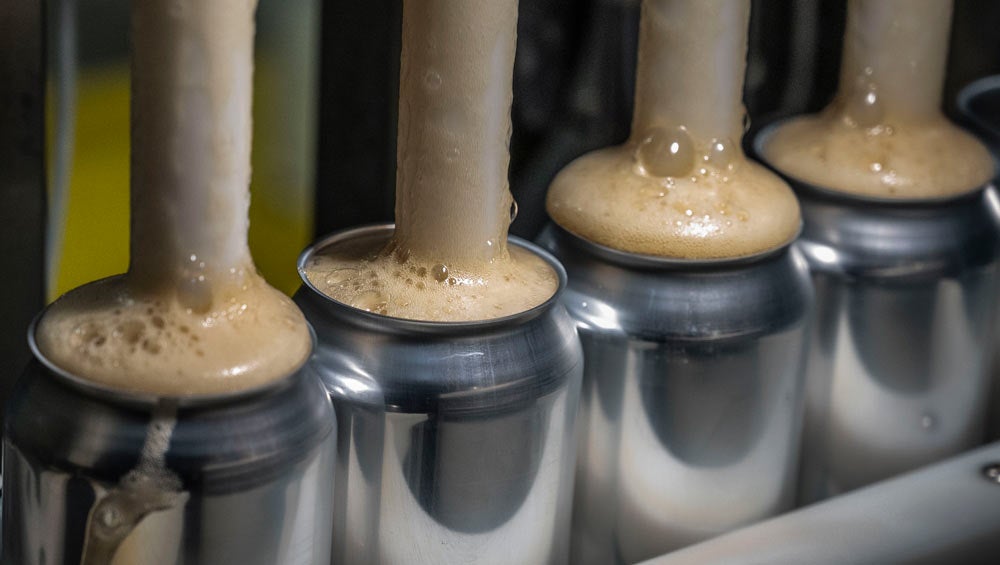 The ale goes in … 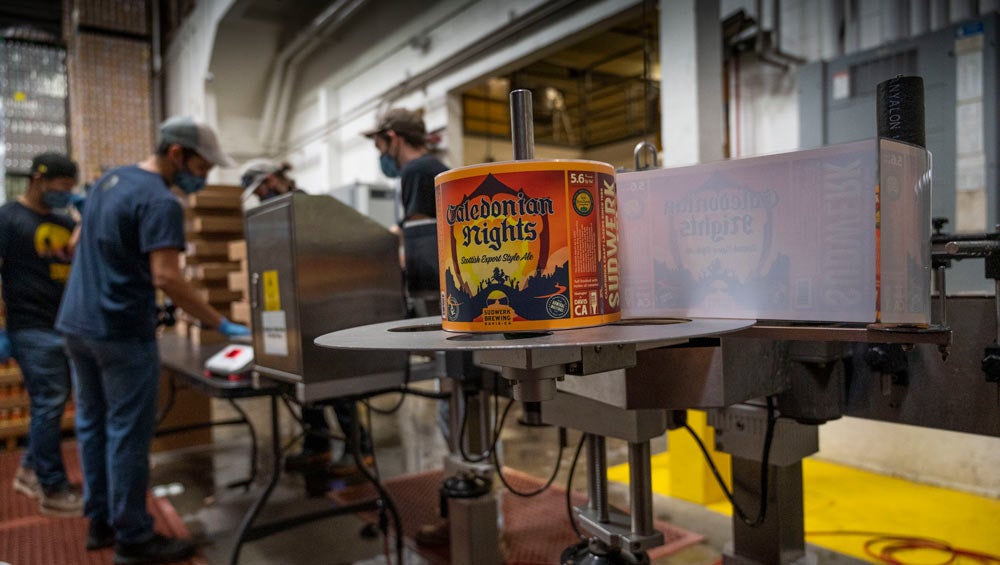 A ‘steppingstone’ for brewers

The ownership has long supported the UC Davis Brewing Program and has partnered with faculty for decades to give students the opportunity for hands-on experience to supplement their education.

“We’ve had a lot of interns and employees who have gone on to be head brewers across the nation,” Yackzan said. “We’ve been a steppingstone for a lot of brewers, giving them technical experience that they can put on their resumes and then start their brewing careers with a strong foundation.”

Production of Caledonian Nights began when the Sudwerk brewer taught the team how to scale up their recipe so it tasted the same as what they made at the pilot brewery on campus, Yackzan said. Then they helped with the brewing — in an operation that yielded just over 11 barrels, or 341 gallons.

The team also worked with Sudwerk staff on the name and label (designed by Sudwerk), the canning, and sales, marketing and distribution — including how to price beer properly for the market.

“After the packaging we took the students to a few accounts (Nugget Market, The Davis Beer Shoppe, etc.) to tell the story and sell the beer, which also went well,” Yackzan said.

Caledonian Nights went on sale at Sudwerk’s Dock Store during a release party last Thursday (July 23), and should be available next week (the week of Aug. 3) in a number of area stores (see list below). Yackzan emphasized: Caledonian Nights is a limited run. A portion of all sales goes to the UC Davis Brewing Program.

“We are extremely grateful to Sudwerk for working with us and allowing us to see how a commercial brewery works firsthand despite the challenges caused by COVID,” said Thudium, who plans to explore a career in the brewing industry. “We are very proud of our accomplishments and look forward to seeing our beer on store shelves.”

This is the first year the Iron Brew winner has been canned and sold in grocery stores. Typically, the beer is distributed to restaurants, but not this year because of the pandemic.

“It was a good opportunity for us to show the students you can always adapt and overcome unforeseen challenges if everyone’s onboard,” Yackzan said. “It’s part of the experience and a lesson we’re teaching the students.”

Added Professor Fox: “This is just one of the special aspects of the UC Davis Brewing Program. The history of the program, our brilliant on-campus brewing staff, the state-of-the art equipment and connection with industry makes it one of the best in the world.”

GET TO KNOW THIS ALE

“Show up” at Sips and Bites with Caledonian Nights, available at Sudwerk’s Dock Store, 2001 Second St., and online for shipping anywhere in California. Use Coupon Code SIPSBITES to receive free shipping on the 24-can case (not applicable on the four-pack).

Also available (the week of Aug. 3) at the Nugget Market on West Covell Boulevard in Davis and the Nugget in West Sacramento (and perhaps other Nuggets), Davis Food Co-op, Davis Beer Shoppe, IGA Market in west Davis, Market 515 in Sacramento and Curtis Park Market in Sacramento.

John Stumbos and Hector Amezcua work in communications for the College of Agricultural and Environmental Sciences, Stumbos as a senior writer and Amezcua as a digital communications specialist. Dave Jones and Karin Higgins work in the Office of Strategic Communications, Jones as the editor of Dateline UC Davis and Higgins as a principal photographer.