MSW student contributes to Forward Through Ferguson with COVID-19 research 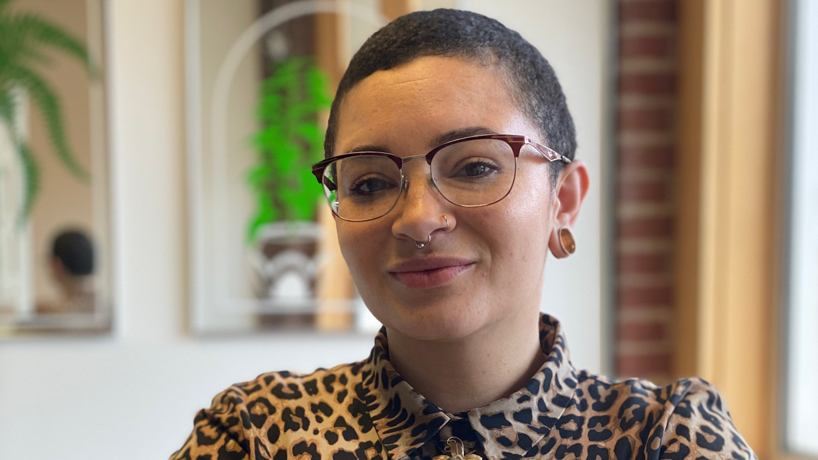 Lacey Corbett’s research for the Ferguson Commission identified the disproportionate effect of COVID-19 on Black communities in St. Louis. Corbett and a fellow researcher found that COVID-19 case and death rates are nearly four times higher among Black St. Louis County residents compared to white residents. She has also worked to clarify misinformation about testing sites in the St. Louis region. (Photo courtesy of Lacey Corbett)

In the wake of the shooting death of Michael Brown, unrest rocked Ferguson, Missouri. The Ferguson Commission was formed shortly thereafter as an independent body to study the social and economic conditions underscored by the discord.

The commission’s efforts went into “Forward Through Ferguson: A Path Toward Racial Equity,” a series of reports examining those social and economic issues.

Lacey Corbett, a social work graduate student at the University of Missouri–St. Louis, has played a key role as a researcher while the commission tackles education reform and disparities during the COVID-19 pandemic. Most recently, her research has been featured in a series of investigative pieces on the effects of COVID-19 on St. Louis’ Black communities.

Corbett initially came to UMSL to pursue a bachelor’s degree in psychology. After graduating, she began working at the Children’s Division in the Missouri Department of Social Services. The branch is responsible for the administration of child welfare services in the state.

Graduate school was always a goal for Corbett, but she was undecided on what to study. Her work as an investigator looking into child abuse and neglect at the Children’s Division offered clarity.

“Minority, mental health and social justice issues were always in the back of my head at the Children’s Division,” she said. “I saw a lot of disparity there within the system, as far as policy goes. I just knew I had to get back to school.”

Corbett did just that.

Upon her return to UMSL, she began a graduate program in social work. This year, she landed a fellowship to work on Forward Through Ferguson in a data and research role. The plan was to work on issues related to education reform in the region for the group’s State of St. Louis report. The world had other ideas.

“That’s what I expected to be doing coming into this,” Corbett said. “But then COVID came along, so it kind of flipped everything upside down.”

The group is still working on the education report, which will be released this fall, and plans to release another paper before then about equity in educational structures.

However, the COVID-19 pandemic – especially the disproportionate deaths in Black communities – couldn’t be ignored, so Corbett and Christian Vargas, a fellow from Washington University in St. Louis, started working on the issue. Their research is being featured in the commission’s Still Compromising series published on Medium.

“I helped from the beginning doing some background research, from testing sites to essential workers and things like that,” Corbett said.

The first piece looked at who’s getting sick in the region. It involved Corbett calling every listed testing site in the city of St. Louis, St. Louis County and St. Charles County repeatedly and speaking to workers administering the tests.

Like the rest of the country, COVID-19 is having a disproportionate effect on Black communities in St. Louis.

According to data from the Centers for Disease Control and Prevention, non-Hispanic Black populations in the U.S. have a hospitalization rate approximately five times that of non-Hispanic white populations.

She also noted that tests were scarce early on and places where they were available were often in locations like West County. These factors also had a greater effect on Black St. Louisans.

“Anytime you have things set up for the community where the Metro doesn’t go, there’s an inherent problem,” she said.

One of the other primary goals of the research was to spread awareness about testing sites and clarify misinformation. Many residents were confused about where to go and what was required to get a test.

“When we were calling initially, the rules were still very strict. You had to have all these symptoms – you had to be in contact with someone who had it, you had to have gone outside of the country, things like that. As the weeks progressed, those things softened up, and there was more access for people.”

A director of a testing site admitted that he had concerns about the information circulating and said many residents had shown up at his site assuming they could get a test when that was not the case.

“As somebody who was researching the issue, I found it difficult to find information,” Corbett added.

The issues being amplified by the pandemic are deeply rooted, but Corbett believes crisis presents opportunity for change.

“I think it’s a really good time to enact systemic change because we see that things can be done differently right now,” she said.  “We’re in a unique position where everybody has been impacted in some way, and I think sometimes that’s really what it takes – everybody to be impacted by something to open their eyes.”

Corbett is continuing to research the pandemic, but she is also contributing to education issues. As a social worker and parent, she’s passionate about addressing the digital divide in the region and ending out-of-school suspensions, which disproportionally affect Black students and contribute to the achievement gap.

It’s given her inspiration for what she might pursue after her expected graduation in 2021.