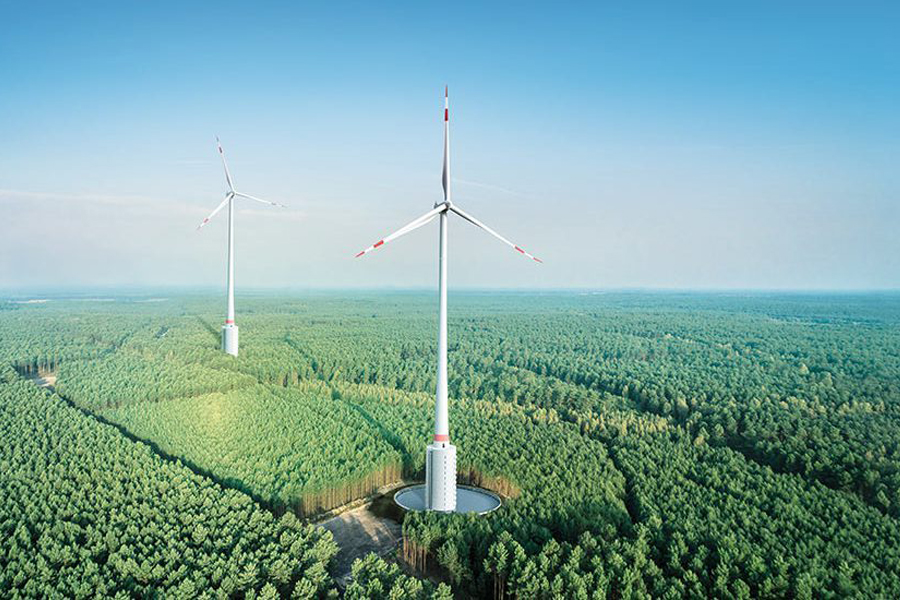 An example of a tall wind turbine, like the ones that emerging technologies might make economically viable in Florida and other parts of the Southeast. Courtesy of Electrek.

Florida is one of several states in the Southeast where wind energy is virtually nonexistent, which is one reason wind farms have not been an economically viable energy source in the region. But a new study from the FAMU-FSU College of Engineering shows how upcoming technological advances could make wind energy a hot commodity in the Sunshine State.

Sean Martin, a researcher in the Department of Civil and Environmental Engineering from Florida State University, is working with an interdisciplinary team of scientists to examine wind resource characteristics at nine different locations in Florida. Their analysis will help the wind industry and policymakers know how viable wind energy production using developing technologies could be.

Sean Martin, a researcher in the Department of Civil and Environmental Engineering

Their work was published in the journal Applied Energy.

“With advances in turbine technology, taller towers, larger rotor diameter and new control systems, we will be able to provide low-cost wind power to low-wind regions, such as Florida and the Southeast,” Martin said. “The increased hub heights and taller turbines can take advantage of greater wind speeds that occur higher up to harvest more wind power.”

Compared to states like Texas or Iowa, the wind in Florida is not something wind farms can profitably capture at the moment. Wind speeds are slower because of increased surface friction and turbulence caused by buildings, trees and other obstructions. Most utility-scale turbines installed in the United States are west of the Mississippi River, where more favorable wind speeds, greater than 13 miles per hour, are prevalent.

But using new tools that can capture wind energy at higher elevations, where wind speeds are faster, might make wind energy feasible.

Arda Vanli, associate professor in the Department of Industrial and Manufacturing Engineering

So how tall are these turbines? The average height of most existing on-shore turbines from the ground to the top of the blades is more than 380 feet, similar to a 32-story building. The new, taller turbines are almost twice the height at 660 feet, close to the height of a 55-story building, and are the kind of wind turbines that will be most useful in Florida.

“I don’t think anybody can predict the timing for wind energy,” Jung said. “We almost had it a few years ago. There was a private company that proposed a wind farm in Florida, but the company withdrew the plan because the technology at the time was not economical enough. I hope we will see wind energy in the future as technology improves.”

Sungmoon Jung, associate professor in the Department of Civil and Environmental Engineering

One of the things the researchers are looking at is the capacity of wind turbines to operate at different sites. Wind speed varies, so turbines must be able to spin at different velocities. Researchers want to know what percentage of time in a year that the turbine can operate at full capacity. In general, turbines that generate at least 30 percent of their total capacity are more economical for utility-scale wind power. The data will be able to predict the best areas in Florida to place the new turbines based on their ability to produce wind energy at specific sites.

“The key is finding and identifying characteristic patterns in the wind data,” Martin said. “Once we establish the patterns, the data can assist in site selection and can improve energy estimation measures to help industry and policymakers make decisions on where wind farms are most profitable.”

There are other factors the researchers must consider when choosing a site for a wind farm. Safety for birds, noise from rotors and the fact that some people may find wind turbines unsightly are all considerations.

When including some of these elements with wind speed data, the scientists found that the best locations for wind farms appear to be in rural areas of northwest, central and southern Florida.

“Site selection is an important decision, especially in low-wind power areas,” Vanli said. “Transporting huge wind turbines to these locations is a significant investment and having good data can eventually determine whether the investment will be successful or not.”

Wind energy is gaining significant attention both from academia and in industry. New, affordable methods for generating renewable energy are on the horizon. Wind farms could be viable in Florida within this decade, and turbines even taller than the ones used for this research could be more prevalent in the future.

“The real question is whether factors such as public perception, acceptance and environmental factors will prevent this resource from being developed,” Martin said. “We hope the research will add additional renewables to the U.S. energy portfolio and can offset our reliance on a single fuel source, adding energy security to meet a growing need.”