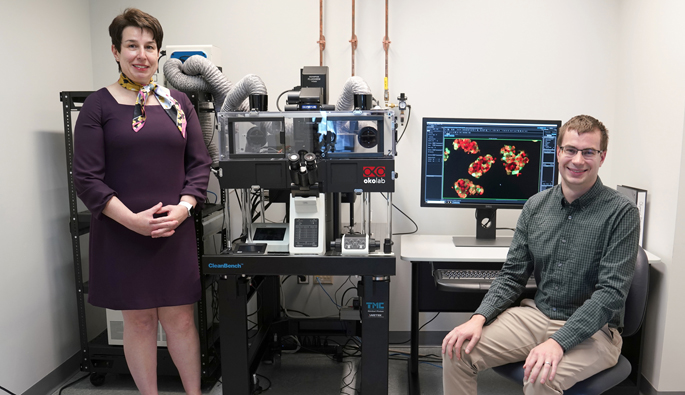 The multicellular, 3-D structure of human pancreatic islets — the areas of the pancreas containing hormone-producing or endocrine cells — has presented challenges to researchers as they study and manipulate these cells’ function, but Vanderbilt University Medical Center researchers have now developed a pseudoislet system that allows for much easier study of islet function.

A pancreatic islet is composed primarily of beta cells, alpha cells and delta cells, but also includes many supporting cells, such as endothelial cells, nerve fibers and immune cells, which act in concert as a mini organ to control blood glucose through hormone secretion. Insulin, secreted from beta islet cells, lowers blood glucose by stimulating glucose uptake in peripheral tissues, while glucagon, secreted from alpha islet cells, raises blood glucose through its actions in the liver.

Dysfunction of these islet cells is a primary component of all forms of diabetes, and a better understanding of this dysfunction can lead to improved treatment and management of the disease. Vanderbilt scientists and others around the world have identified potential targets for diabetes using both mouse models and human tissue, however the lack of a system to manipulate these pathways in human islet cells has limited the field.

The VUMC team led by Marcela Brissova, PhD, research professor of Medicine and director of the Islet Procurement and Analysis Core of the Diabetes Research and Training Center, began attempting a protocol for the pseudoislet system in 2016, performing countless trials. In late 2017, Rachana Haliyur, then a Vanderbilt MD/PhD student, combined media containing factors that support vascular cells and endocrine cells into what the group named the Vanderbilt Pseudoislet Media. The team watched as the cells began reaggregating, or organizing themselves in a way that resembled native islets.

“A lot of things in science happen serendipitously, and this was one of those,” said Brissova. “We tried and failed many times, and basically it came down to the media we used for our cells. In our recent publication, we have provided all experimental details and our protocol so others can make the media and create pseudoislets in their own laboratories.”

Because of the complex structure of the human islet, it is difficult to introduce and manipulate cells past the first cell-layer of the islet sphere. The pseudoislet system allows investigators to separate the pancreatic islet into single cells, introduce a virus into the cells which allows genetic manipulation and then combine the cells back together again into a pseudoislet. This allows researchers to target certain cell types or replicate changes happening in disease and study them in the 3-D environment of the islet.

John “Jack” Walker, an MD/PhD student in the Powers & Brissova Research Group, continued to refine the pseudoislet system protocol and was co-first author on a recent study based on the system published in JCI Insight, an open access journal published by the American Society for Clinical Investigation (ASCI).

In addition, this approach allowed the scientists to introduce biosensors into the islet cells to measure intercellular signaling events within the cells and better understand how those are linked to hormone secretion.

Another advance was the combination of the pseudoislet system with a unique microfluidic device, developed by co-authors Matthew Ishahak and Ashutosh Agarwal, PhD, from the University of Miami, that allowed the investigators to simultaneously document the changes in both calcium ions and hormone secretion.

“The exciting thing about this approach is that we both deconstruct the islet for our manipulation and reconstruct it to understand functional consequences at a larger level,” Walker said. “Since we put the islet cells back together, we can look at both insulin and glucagon secretion, but in a coordinated manner. Both of the secretion profiles measured are reflective of intra-islet interactions that are happening as well.”

This work greatly benefited from the research environment and infrastructure at Vanderbilt, particularly the National Institutes of Health (NIH)-funded Diabetes Research and Training Center (DRTC) and the Vanderbilt Cell Imaging Shared Resource.

“Another research direction will be creating pseudoislets that replicate a specific disease state, such as pseudo-islets that look like native islets from an individual with type 1 diabetes,” Haliyur said.

“Our system is being used in many projects within our own group and also by our colleagues, so it’ll be really exciting to see how it will branch out into different areas of islet biology,” Brissova said. “I believe this system will help us better translate information from mouse model studies, test effects of genes identified by human type 1 and type 2 diabetes studies, and better study mechanisms of future therapeutics.”

Brissova is a member of the Human Islet Research Network (HIRN), a team science approach supported by the National Institute of Diabetes and Digestive and Kidney Diseases (NIDDK) of the NIH to organize and support collaborative research in human islet biology and diabetes. This work was also supported by the JDRF, the VA Research Service, and The Leona M. and Harry B. Helmsley Charitable Trust.