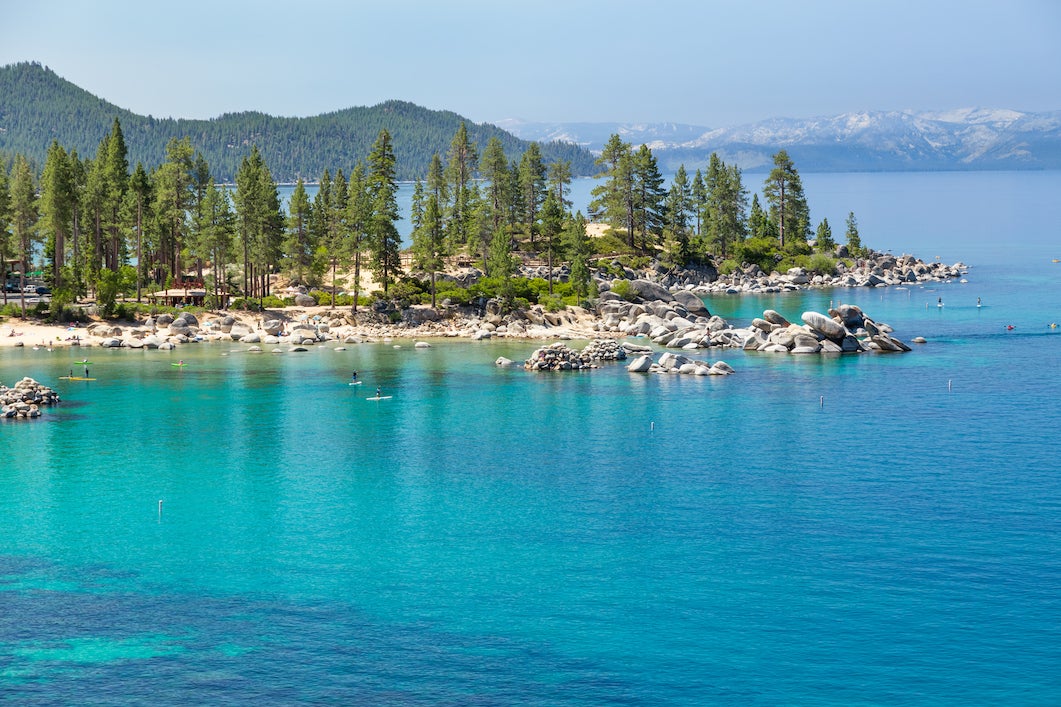 Turning out-of-control shrimp into dog treats, learning the lake physics of safe paddleboarding and maintaining a long-term data set during a pandemic are just some of the activities that have made for a unique year at Lake Tahoe.

Today, the UC Davis Tahoe Environmental Research Center released its annual Tahoe: State of the Lake Report. The report informs nonscientists about important factors affecting the health of Lake Tahoe. It also intends to provide the scientific underpinnings for ecosystem restoration and management decisions within the Lake Tahoe Basin.

The report summarizes data collected in 2019 as part of the center’s ongoing, decades-long measurement programs, while also presenting current research on emerging issues.

Highlights of the report include:

Climate change at Lake Tahoe is evident in long-term trends, which show rising air temperatures and less precipitation falling as snow. But weatherwise, 2019 was a cold year. The average air temperature in February was 4.4 degrees Fahrenheit lower than the long-term average, making it the coldest February since 1956. In July, the average surface water temperature of 68 F was about 4 degrees cooler in 2019 than in 2017.

In 2019, precipitation was a foot higher than the average for the past 110 years, with February also being the wettest month of the year.

Despite the cooler year, the long-term climate trends are increasing the length of the warmer months and impacting clarity.

Clarity at Lake Tahoe, as reported earlier this summer, was mixed in 2019. Lake clarity decreased nearly 8 feet from the previous year’s dramatic 10-foot improvement. The average annual value in 2019 was 62.7 feet. The lowest value was recorded in 2017, when clarity was 60 feet.

Along with above-average precipitation, nitrogen and phosphorus loads from the Upper Truckee River were above average, yet well below the record loads from 2017.

Attached algae (periphyton) on rocks around the lake were heavy in 2019, especially on the California side of the lake. Notably, Nevada’s Zephyr Cove showed its second-highest value on record.

TERC and its partners are exploring remote sensing techniques to track both periphyton and free-floating metaphyton algae, an effort the public can help with through the Citizen Science Tahoe App.

A clearer picture of the impact of invasive Mysis shrimp on lake health and clarity is emerging, the report says. While research is underway, the available data suggest that tiny shrimp introduced to the lake in the 1960s were responsible for the removal of Daphnia, native zooplankton that helped clean the lake. Without Daphnia, tiny algae called Cyclotella grew unchecked, and fine sediments accumulated. Climate change exacerbates the problem, as a warmer lake surface encourages tiny particles to stay afloat and reduce Tahoe’s famed clarity.

The report emphasizes that past and current restoration activities to prevent additional nitrogen, phosphorus and fine particles from entering the lake are also critically important for preserving Lake Tahoe.

“We have learned that we now have two very powerful, science-based approaches for clarity and ecosystem restoration,” said Geoffrey Schladow, TERC director and a professor in the UC Davis Department of Civil and Environmental Engineering.

TERC is working with the UC Davis Graduate School of Management and UC Davis School of Veterinary Medicine to launch a venture that harvests Mysis shrimp, which are rich in omega-3 fatty acids, to make dog treats. This is part of exploratory efforts to remove Mysis in a cost-sustainable manner, restore native zooplankton and enhance lake clarity.

This year’s report also has tips for paddleboarders based on physics: Be wary of the day after strong wind events, as there may be strong currents and icy water on the side of the lake where the wind came from. Computer simulations show how warm surface waters are pushed downwind during upwelling events while cold water rises from the depths, posing a risky situation for paddleboarders suddenly caught in what can be 42 F water.

Beyond Tahoe: Patagonia and Clear Lake

TERC is taking lessons from Tahoe to help inform the management of other lakes. This includes California’s Clear Lake, where scientists are investigating harmful algal blooms using an autonomous underwater vehicle, aerial drones and satellite images.

TERC scientists are also working with sister lakes in Chile, where pressure for holiday homes, tourism and agriculture is increasing around lakes in Patagonia. Lake Tahoe was in a similar position following a period of development and growth after the 1960s, sparking the long-term monitoring effort still occurring today.

Science goes on during the pandemic

Long-term data sets exist because they are consistently maintained. The report describes how TERC researchers and staff revamped their process for conducting science, as well as moving much of their educational outreach online, during state stay-at-home directives to slow the spread of COVID-19.