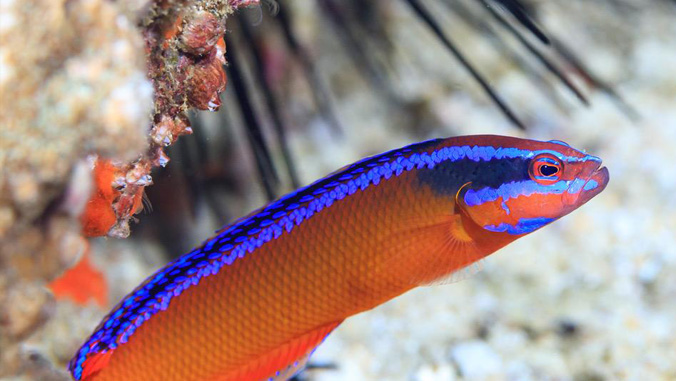 Neon dotty back, a common cryptobenthic predator in the Sea of Oman. Photo credit: Tane Sinclair-Taylor.

Small, bottom-dwelling reef fishes on the world’s hottest coral reefs in the southern Arabian Gulf are much less diverse and abundant than on nearby reefs with less extreme temperatures. That is according to a study published in Nature Communications by an international team of researchers, including Jacob Johansen, an assistant research professor at the University of Hawaiʻi at Mānoa’s Hawaiʻi Institute of Marine Biology.

The study examined ‘cryptobenthic’ fishes, small fish at the base of coral reef food webs, in the Arabian Gulf and the Sea of Oman. Findings linked the reduced diversity and productivity of communities in the Arabian Gulf to energetic deficits that preclude the existence of many species.

The scientists, hosted and supported by New York University, Abu Dhabi (NYUAD), were led by Johansen, previously a research scientist at NYUAD’s marine biology lab, and Simon Brandl at the Centre de Recherches Insulaires et Observatoire de l’Environnement in France. They used a variety of techniques to compare organismal traits, diversity and productivity of cryptobenthic reef fish in the environmentally extreme Arabian Gulf with those in the Sea of Oman. 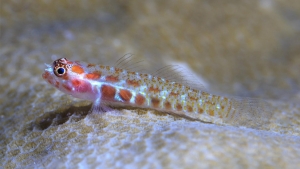 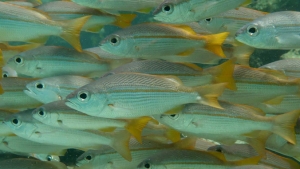 A school of large fish in the Sea of Oman. (Photo credit: Jordan M. Casey)

As global warming continues to escalate, there are lasting implications to consider, including the changes to biological communities in vital habitats such as coral reefs.

“The Arabian Gulf is the world’s hottest sea, with summer water temperatures well beyond those experienced by fishes elsewhere in the tropics, while the adjacent Sea of Oman is considerably more benign,” said John Burt, senior author and associate professor of biology at NYUAD. “This makes this region a useful natural laboratory for understanding how climate extremes affect fish function and diversity.”

Fish communities in the Arabian Gulf were found to be half as diverse and less than 25 percent as abundant as those in the Sea of Oman, despite broad similarities in the amount of live coral. Surprisingly, this does not seem to be related to absolute temperature tolerances of cryptobenthic fishes.

“We expected to see much lower temperature tolerances in species that occur in the Sea of Oman, but not in the southern Arabian Gulf,” said Johansen. “Yet, the critical thermal tolerances of all species found in the Gulf of Oman were, in theory, sufficient to survive even the maximum summer water temperatures of 36 degrees Celsius [nearly 97 degrees Fahrenheit] in the southern Arabian Gulf.”

Instead, differences in prey eaten and body condition in the species present at both locations suggest that the thermal extremes of the Arabian Gulf are an energetically challenging environment for these smallest marine vertebrates.
While survival in hotter waters require more energy, it appears that a distinct, less diverse set of prey items in the Arabian Gulf may make it difficult for these small-bodied fishes to satisfy their energetic demands.

Watch a video summary of the study.

For more see the School of Ocean and Earth Science and Technology’s website.