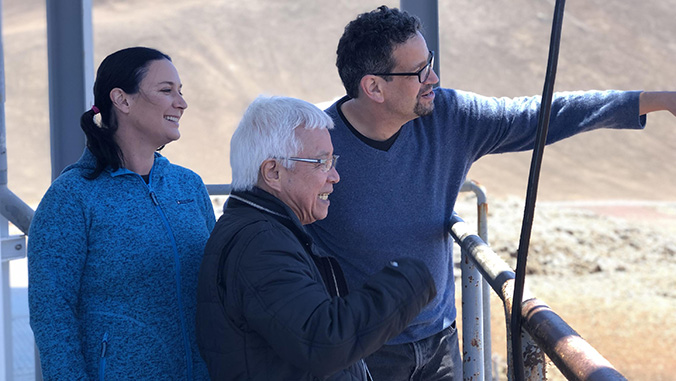 The planet is abuzz after an international team of astronomers revealed there could be life on our solar system’s hottest planet, Venus. While using the James Clerk Maxwell Telescope on Maunakea, the team detected the gas phosphine in the Venusian atmosphere, a gas excreted by tiny living organisms on Earth. 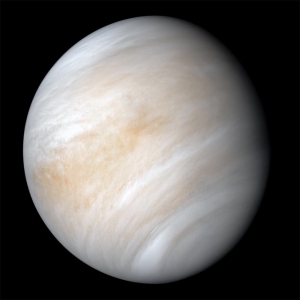 Because the discovery occurred on Hawaiʻi soil, astronomers thought it would be fitting to mark the exciting observation with a Hawaiian name. University of Hawaiʻi at Hilo Ka Haka ʻUla O Keʻelikōlani College of Hawaiian Language Associate Professor Larry Kimura was thrilled when he was approached, “It’s an exciting discovery because we’ve always asked the question, ‘Is there life out there?’”

Kimura started to ponder a possible name, first dedicating his focus on the gas itself. He ultimately decided to create a new word, Makaola to describe the possibility of the detection of life on Venus. “I thought, no sense looking at this from a scientific description. I was thinking of this as a general understanding of a determination…the appearance of this confirmation,” he explained. In Hawaiian, maka is the basic word for eye but also has other meanings; kūmaka (visible, seen) or makamua (the very first). In Hawaiian creation chant, Kumulipo, the word makaliʻi gives reference to tiny points of a beginning.

ʻŌlelo Hawaiʻi sails through the universe

In recent years, astronomical discoveries made in Hawaiʻi that spurred massive media attention worldwide have also helped propel ʻōlelo Hawaiʻi (Hawaiian language) because they carry Hawaiian names. In 2017, Kimura named the first inter-stellar object to be tracked through our solar system, ʻOumuamua (scout from the distant past).

In 2019, astronomers asked for help naming a supermassive black hole detected by telescopes on Maunakea, the first ever to be photographed. Kimura offered the name, Pōwehi (embellished dark source of unending creation) which can also be traced to origins of the Kumulipo. 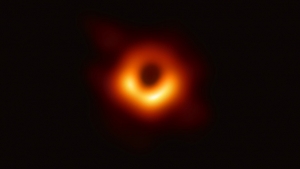 Hawaiʻi is the first place in the world to weave traditional indigenous practices into the process of officially naming astronomical discoveries. Kimura is thrilled the science community and the world refer to the recent discoveries by their Hawaiian names.

“Just hearing it, people speaking in Japanese, and in other languages and I hear the pronunciation, I go, ‘Wow, they’re saying our Hawaiian words. That’s fabulous,’” he exclaimed. “We have to get our Hawaiian words out there as much as we can.”

Merging ʻōlelo Hawaiʻi with scientific knowledge is a growing movement. The ʻImiloa Astronomy Center has collaborated with UH Hilo to establish A Hua Inoa, a program where Hawaiian speaking students work with Hawaiian language educators and Hawaiʻi-based astronomers on naming astronomical discoveries. 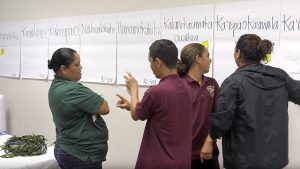 Kimura is at the helm of the educational program, in 2018, Hawaiian immersion students named two asteroids, Kamoʻoalewa (celestial object that is oscillating, like its path in the sky as viewed from the Earth) and Kaʻepaokaʻāwela (mischievous opposite-moving companion of Jupiter). In 2020, more than two-dozen Hawaiian immersion kumu (teachers) named the most massive quasar known in the early universe, Pōniuāʻena (unseen spinning source of creation, surrounded by brilliance).

With the hope of more groundbreaking discoveries on the horizon, the hope for securing a place for Hawaiʻi’s language, nearly extinct once upon a time, is also alive.