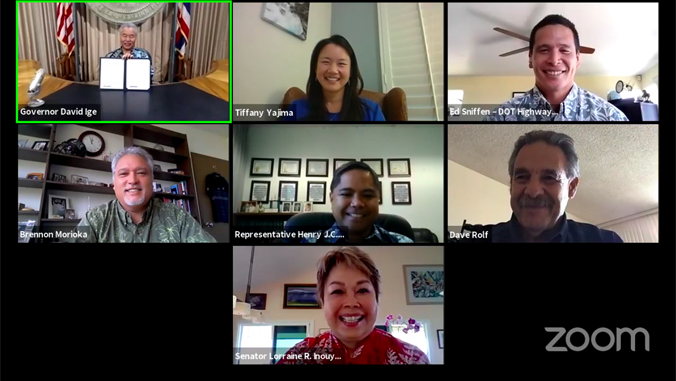 The University of Hawaiʻi at Mānoa College of Engineering was recognized for its commitment in preparing the state for a future of self-driving cars in September. Hawaiʻi Gov. David Ige commended Dean Brennon Morioka, Interim Associate Dean David Ma and the college at a virtual bill signing event.

House Bill 2590 establishes an autonomous vehicle testing pilot program within the State of Hawaiʻi Department of Transportation (HDOT). It allows the program to test autonomous vehicles on any public road in the state given that a human driver is present in the vehicle to intervene, prevent a collision or resolve any other issues during testing. The group is required to submit a report of its findings to the state legislature.

Ige said his administration is interested in the advancement of autonomous vehicles and emphasized enhanced safety as a benefit of the technology.

“We’re really excited to move forward on this technology. We’re hoping this will shape a new industry in Hawaiʻi and hopefully we’ll be seen—in Hawaiʻi—as leaders in the industry,” HDOT Deputy Director for Highways Ed Sniffen said.

“We do consider ourselves as important partners with the state, especially when it comes to the advancement of technology and innovation and where it involves the development of Hawaiʻi’s workforce to meet the needs of our state’s future,” Morioka said. “The College of Engineering has been developing the expertise in the area of autonomous and connected vehicles, whether it’s underwater, on our roads or in the air.”

One of the major projects related to the future of autonomous vehicles in the state was announced in August 2020. UH Mānoa, HDOT, Federal Highway Administration, Econolite and Goldwings Supply kicked off a pilot project along the Nimitz Highway and Ala Moana Boulevard corridor that uses “Vehicle-to-Everything” communication technology, connecting vehicles, pedestrians and bicyclists, to the infrastructure.

UH researchers will study the opportunities and challenges with the system, conduct research on sensor and data analytics, and establish a traffic engineering lab giving students first-hand experience.