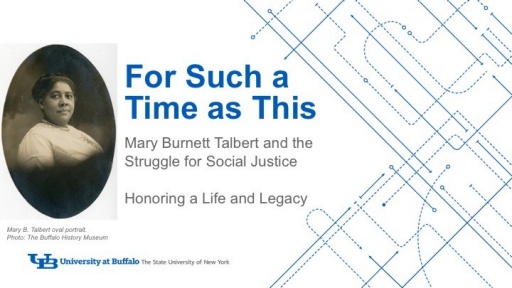 BUFFALO, N.Y. — A virtual panel discussion on Sept. 24 will celebrate the life and achievements of Mary Burnett Talbert, a Buffalo resident who was famous in her time for her tireless work in advancing human rights.

Talbert, who lived from 1866-1923, is described by the National Women’s Hall of Fame as a “civil rights and anti-lynching activist, suffragist, preservationist, international human rights proponent, and educator.” She served as president of the National Association of Colored Women’s Clubs, became a vice president of the NAACP, helped found multiple NAACP chapters, and spoke nationally and internationally to advance an array of causes. Her activism helped lay the foundation for the U.S. civil rights movement, and her legacy continues to this day.

“We would like the UB community to know why Mary Talbert is such an important figure, not only for Buffalo but for the world beyond, and why we honor her life and work through the naming of Mary Talbert Way. It is not just a street sign: It is a philosophy, a way of life to which we aspire,” says Despina Stratigakos, PhD, vice provost for inclusive excellence at UB.

The event, titled, “‘For Such a Time as This’: Mary Burnett Talbert and the Struggle for Social Justice,” will take place at noon on Sept. 24. It is part of the “Let’s Talk About Race” series presented by UB’s Office of Inclusive Excellence. For a livestream link, visit http://www.buffalo.edu/inclusion/projects/talk_race.html.

The event will focus on Talbert’s achievements and why it’s important to remember her legacy in place of someone like Putnam, Emberton says. She notes that the panel is taking place as institutions across the country are renaming or removing monuments as part of the fight for racial justice.

“I was ecstatic when I learned that UB would name a road in honor of Mary Burnett Talbert,” Williams says. “Talbert’s lifelong dedication to social justice personifies unselfish service and a commitment to civic engagement. Talbert Way encircles the academic spine at UB, where many classroom and office buildings are located, and symbolizes what should take place within those boundaries.

“It is important to honor historical figures, like Talbert, for it conveys a sense of being and a welcoming environment for so many. But Talbert said it best when she spoke at the dedication of the Frederick Douglass estate in Washington. She told the gathering, ‘It is important that our children know who fought for their liberty so they will be encouraged to go forth, like Douglass, and continue the fight for social justice.’”

“African American history in the City of Buffalo needs to be highlighted more,” says Wiley-Upshaw. “We don’t teach history from a perspective that’s inclusive, and it’s important to tell the stories of people like Mary Talbert. Mary was one person, but her legacy was everlasting. We’re still talking about everything that she did, and all of us need to know that we can make a difference. When I look at the accomplishments of so many people who have gone before us, it helps give me a sense of courage and optimism that in this climate of racial tension, we can make a change.”

Wiley-Upshaw, a former vice dean in the UB School of Law, says Talbert’s story is entwined with the story of the Michigan Street Baptist Church — a beacon of freedom in Buffalo that was a stop on the underground railroad, a meeting place for abolitionists, and a hub for civil rights activism.

“You can’t tell the story of the Michigan Street Baptist Church without telling the history of Mary Talbert,” Wiley-Upshaw says. “The activism that the church had was tied into who Mary was. She walked these steps, and she was in this space — it was a meeting place — and it was really truly amazing. The church was overflowing when her funeral was held there. She was so beloved, and the church was such a beloved space for her.”

Wiley-Upshaw and colleagues are working to make Michigan Avenue in Buffalo a destination that highlights the extraordinary lives of people in the local African American community, and the significance that their work had nationally and internationally. The church is one of the sites included in tours of the Michigan Street African American Heritage Corridor, which will be available again starting Sept. 26, with precautions in place for the COVID-19 pandemic, Wiley-Upshaw says.

Williams’ efforts, too, have raised awareness of Talbert’s story in Buffalo and beyond. In 2005, Williams teamed up with Madeline Scott, president of the Afro-American Historical Association of the Niagara Frontier, to successfully nominate Talbert to the National Women’s Hall of Fame. The naming of Talbert Hall at UB also resulted from Williams’ work. As a UB graduate student in the 1970s, Williams nominated Talbert for the honor, preparing a proposal that was selected by a campus committee.