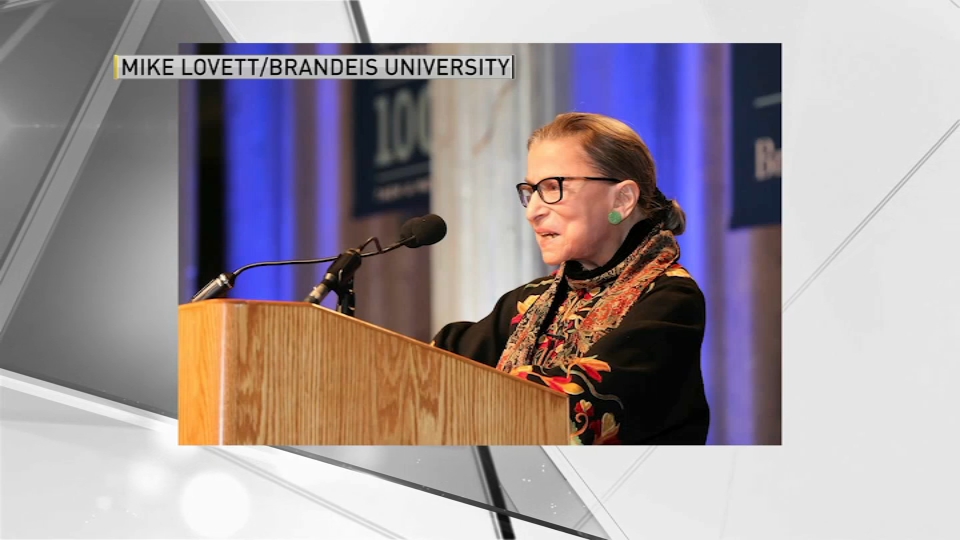 Without question, Supreme Court Justice Ruth Bader Ginsburg made a lasting impact in every corner of the United States, including here in New England and at Brandeis University in Waltham, Massachusetts.

During a 2016 visit to the university, Justice Ginsburg paid tribute to the namesake of the school.

Addressing a crowd of 2,000, Ginsburg said of Louis Brandeis, “In these remarks, I will try to convey his impact on me in my years as a lawyer and then as a judge.”

Justice Ginsburg was on campus to mark the 100th anniversary of Brandeis’ nomination to the Supreme Court. During her remarks, Ginsburg praised him for his commitment to civil rights and support of women’s equality.

Her speech was held in a gymnasium on campus because so many people wanted to attend.

Ginsburg was a pioneer who championed women’s rights and leaves a great legacy.

“I remember walking with Justice Ginsburg into the space and she turned to me and she said, ‘my goodness what is this space?’ I said, ‘well it’s our gym.’ And she said, ‘I don’t think I’ve ever given a keynote address in a gymnasium before,'” Lynch recounted. “The crowd just erupted as she walked onto the stage.”

Ginsburg’s first visit to the Waltham campus was in 1996 when she received an honorary law degree.

Lynch said she had a big impact on the students there.

Ginsburg’s life touched so many, and her reach was far, something Suffolk County District Attorney Rachael Rollins touched on in her comments Saturday.

Justice Ginsburg, a groundbreaker, was one of the most influential people of our lifetime, Rollins told NBC10 Boston the day after Ginsburg died at age 87.

“There is a deep part of me as a woman and as a woman of color that has always looked to her and the other firsts on our United States Supreme Court,” Rollins said.

The DA says the loss of Ginsburg leaves an enormous void.

“She was thoughtful and strategic but relentless,” Rollins said of RBG.

As for what comes next, Rollins says the fight becomes more urgent.

“Her dying wish: ‘My most fervent wish is that I will not be replaced until a new president is installed.’ Let’s honor her and make sure that that happens,” Rollins said.

Ruth Bader Ginsburg’s death opened the door for Republican President Donald Trump and the Senate to speed through a Supreme Court nomination.

Justice Ginsburg represented the very best of what it means to serve, Rollins added.