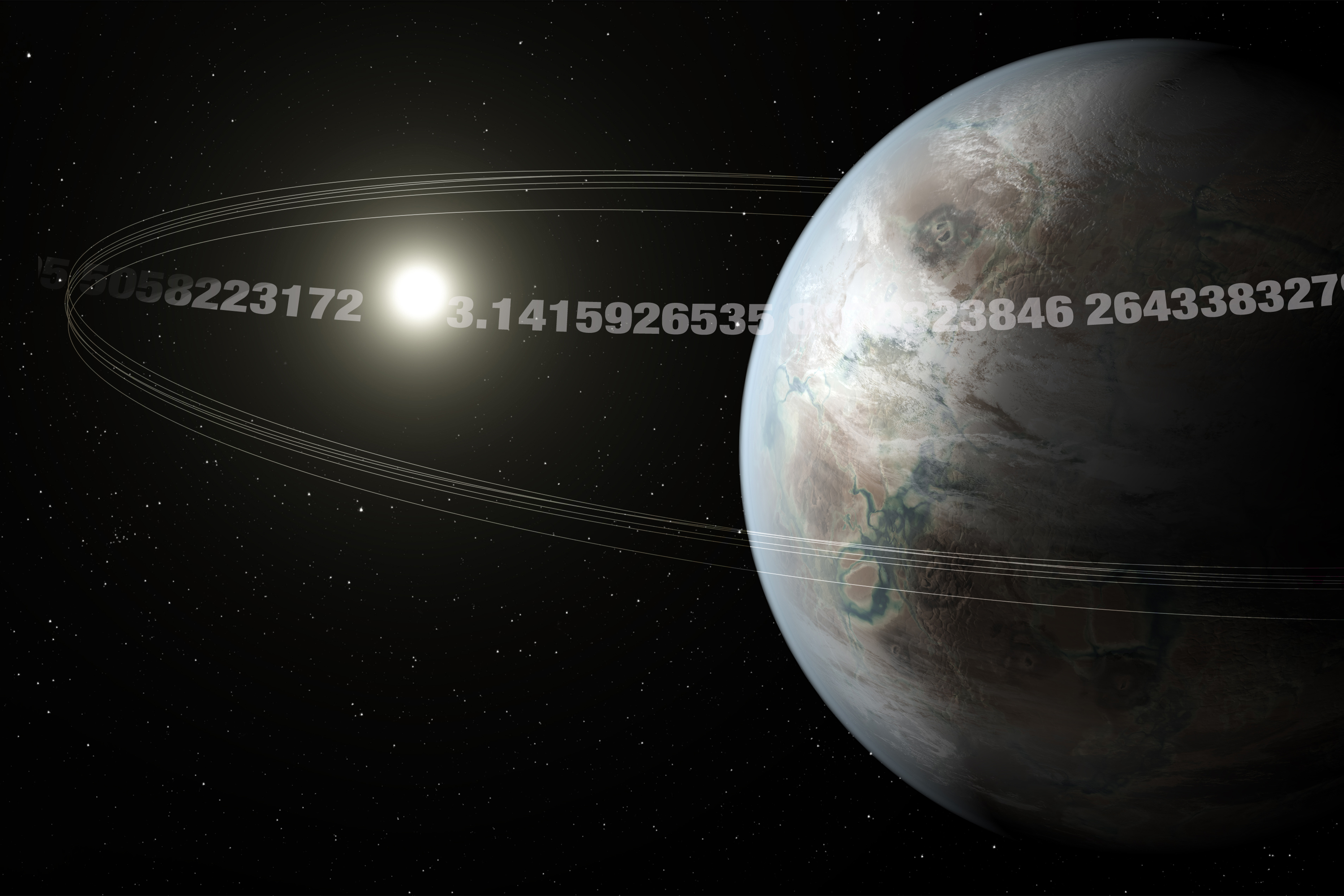 In a delightful alignment of astronomy and mathematics, scientists at MIT and elsewhere have discovered a “pi Earth” — an Earth-sized planet that zips around its star every 3.14 days, in an orbit reminiscent of the universal mathematics constant.

The researchers discovered signals of the planet in data taken in 2017 by the NASA Kepler Space Telescope’s K2 mission. By zeroing in on the system earlier this year with SPECULOOS, a network of ground-based telescopes, the team confirmed that the signals were of a planet orbiting its star. And indeed, the planet appears to still be circling its star today, with a pi-like period, every 3.14 days.

“The planet moves like clockwork,” says Prajwal Niraula, a graduate student in MIT’s Department of Earth, Atmospheric and Planetary Sciences (EAPS), who is the lead author of a paper published today in the Astronomical Journal, titled: “π Earth: a 3.14-day Earth-sized Planet from K2’s Kitchen Served Warm by the SPECULOOS Team.”

“Everyone needs a bit of fun these days,” says co-author Julien de Wit, of both the paper title and the discovery of the pi planet itself.

The new planet is labeled K2-315b; it’s the 315th planetary system discovered within K2 data — just one system shy of an even more serendipitous place on the list.

The researchers estimate that K2-315b has a radius of 0.95 that of Earth’s, making it just about Earth-sized. It orbits a cool, low-mass star that is about one-fifth the size of the sun. The planet circles its star every 3.14 days, at a blistering 81 kilometers per second, or about 181,000 miles per hour.

While its mass is yet to be determined, scientists suspect that K2-315b is terrestrial, like the Earth. But the pi planet is likely not habitable, as its tight orbit brings the planet close enough to its star to heat its surface up to 450 kelvins, or around 350 degrees Fahrenheit — perfect, as it turns out, for baking actual pie.

“This would be too hot to be habitable in the common understanding of the phrase,” says Niraula, who adds that the excitement around this particular planet, aside from its associations with the mathematical constant pi, is that it may prove a promising candidate for studying the characteristics of its atmosphere.

“We now know we can mine and extract planets from archival data, and hopefully there will be no planets left behind, especially these really important ones that have a high impact,” says de Wit, who is an assistant professor in EAPS, and a member of MIT’s Kavli Institute for Astrophysics and Space Research.

Niraula and de Wit’s MIT co-authors include Benjamin Rackham and Artem Burdanov, along with a team of international collaborators.

Dips in the data

The researchers are members of SPECULOOS, an acronym for The Search for habitable Planets EClipsing ULtra-cOOl Stars, and named for a network of four 1-meter telescopes in Chile’s Atacama Desert, which scan the sky across the southern hemisphere. Most recently, the network added a fifth telescope, which is the first to be located in the northern hemisphere, named Artemis — a project that was spearheaded by researchers at MIT.

The SPECULOOS telescopes are designed to search for Earth-like planets around nearby, ultracool dwarfs — small, dim stars that offer astronomers a better chance of spotting an orbiting planet and characterizing its atmosphere, as these stars lack the glare of much larger, brighter stars.

In particular, astronomers look at individual stars for signs of transits, or periodic dips in a star’s light, that signal a possible planet crossing in front of the star, and briefly blocking its light.

Earlier this year, Niraula came upon a cool dwarf, slightly warmer than the commonly accepted threshold for an ultracool dwarf, in data collected by the K2 campaign — the Kepler Space Telescope’s second observing mission, which monitored slivers of the sky as the spacecraft orbited around the sun.

Over several months in 2017, the Kepler telescope observed a part of the sky that included the cool dwarf, labeled in the K2 data as EPIC 249631677. Niraula combed through this period and found around 20 dips in the light of this star, that seemed to repeat every 3.14 days.

The team analyzed the signals, testing different potential astrophysical scenarios for their origin, and confirmed that the signals were likely of a transiting planet, and not a product of some other phenomena such as a binary system of two spiraling stars.

The researchers then planned to get a closer look at the star and its orbiting planet with SPECULOOS. But first, they had to identify a window of time when they would be sure to catch a transit.

“Nailing down the best night to follow up from the ground is a little bit tricky,” says Rackham, who developed a forecasting algorithm to predict when a transit might next occur. “Even when you see this 3.14 day signal in the K2 data, there’s an uncertainty to that, which adds up with every orbit.”

With Rackham’s forecasting algorithm, the group narrowed in on several nights in February 2020 during which they were likely to see the planet crossing in front of its star. They then pointed SPECULOOS’ telescopes in the direction of the star and were able to see three clear transits: two with the network’s Southern Hemisphere telescopes, and the third from Artemis, in the Northern Hemisphere.

The researchers say the new pi planet may be a promising candidate to follow up with the James Webb Space Telescope (JWST), to see details of the planet’s atmosphere. For now, the team is looking through other datasets, such as from NASA’s TESS mission, and are also directly observing the skies with Artemis and the rest of the SPECULOOS network, for signs of Earthlike planets.

“There will be more interesting planets in the future, just in time for JWST, a telescope designed to probe the atmosphere of these alien worlds,” says Niraula. “With better algorithms, hopefully one day, we can look for smaller planets, even as small as Mars.”

This research was supported in part by the Heising-Simons Foundation, and the European Research Council.