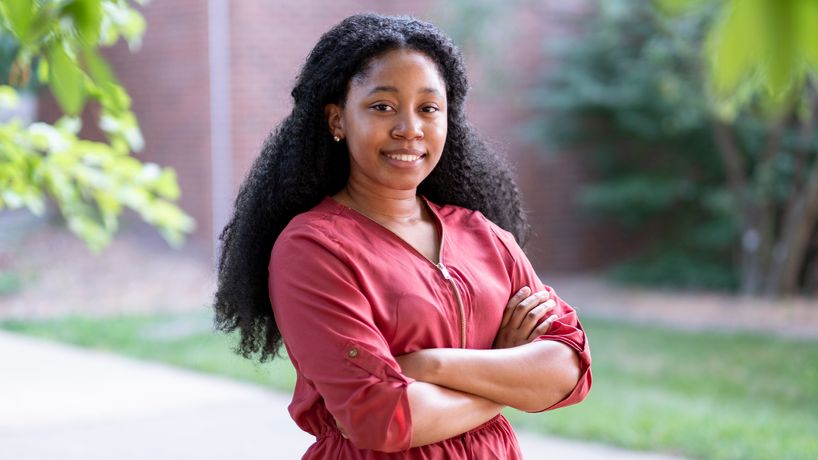 After graduating in May 2020, Kalynn Clinton began working as a senior business analyst for Cigna’s technology early career development program. She remains connected to the University of Missouri–St. Louis through serving on the Supply Chain and Analytics Young Alumni Board. (Photo by August Jennewein)

When UMSL Daily interviewed Kalynn Clinton at the start of her freshman year in fall 2016, she was enrolled as a computer science major and determined to embrace as many opportunities as possible during college.

Four years later, after changing degree programs, she’s an alumna. Clinton graduated from the University of Missouri–St. Louis in May with a BSBA with an emphasis in supply chain management, a minor in information systems and technology and a Pierre Laclede Honors College certificate. She works as a senior business analyst for Cigna’s technology early career development program.

Before Clinton graduated high school, she became acquainted with UMSL through her participation in the Bridge Program, which provides year-round college preparation services to high school and middle school students. She was awarded a Bridge Program Express Scripts Scholarship, which led to an internship at the company.

“One thing I liked about the internship program is that they focused on having us do real work,” she said. “Even though they weren’t time-sensitive projects, it was something that brought value to the team. It’s not just busy work but something that’s actually engaging, helpful and challenging.”

Her skills transitioned well as she began a full-time role. As a TECDP analyst, she will complete three or four rotations in the technology division within three to four years to gain a strong understanding of the organization.

In her current rotation, Clinton is part of a team focused on improving the company’s employee experience. Her role involves mostly project management, such as improving processes, communicating changes and helping employees adapt to those changes.

She discovered her passion for supply chain management while working toward a computer science degree.

“I took a class my sophomore or junior year that was an introductory course, just a general business course that we were supposed to take,” she said. “It got me interested in the topic and understanding how products get from suppliers to the end client and all the different steps, the transformations they go through and the overall management of that process. I was also really interested in the potential growth that I saw in the industry.”

She credited faculty in the supply chain department for providing resources and connections that supported her success. She remains impressed with their expertise and knowledge of the industry as well as their focus on meeting students’ needs.

During her time at UMSL, Clinton was actively involved on campus. She was a member of the Black Business Student Association and Supply Chain and Transportation Club, serving on the board for a year. She was also a member of Sister Scholars-in-Training her freshman year and participated in the Emerging Leaders Program.

She completed a two-week study abroad trip to Belgium and the Netherlands during her senior year, which she characterized as one of her favorite experiences. Her group visited organizations throughout the countries and connected with the culture while learning about business.

She embraced a leadership role by serving as a mentor with Multicultural Student Services, an experience that marked her transition from a mentee.

As an alumna, she remains involved with the university as part of the Supply Chain and Analytics Young Alumni Board and served as a panelist at the Virtual Gathering for Racial Unity event in June.

“It was a great opportunity and great environment for people to come and learn and listen and have an open mindset,” she said. “I was excited to be part of it, helping people understand from my perspective as a recently graduated student how it’s impacting us and also understanding at a broad level what it means during these times.”

Although Clinton has been involved with many areas of campus, the Honors College most closely resembles the type of education she enjoyed growing up. She was homeschooled from kindergarten through 12th grade and valued the balance between an academic focus and social aspects, describing her education as “well-rounded.”

Outside the classroom, she participated in traditional extracurricular activities such as cheerleading, speech and debate and cotillions. Her family joined cooperatives that allowed her to explore a wide range of subjects from history to math to anatomy.

“A lot of students miss out on understanding that their education is their own,” she said. “They have to be the drivers behind their learning. Throughout high school, I was essentially telling my parents, ‘This is what I want to study.’ They would get the materials, and I would learn. It was more aligned with the Honors College experience because it was smaller class sizes, more engaged and more discussion based.”

As a member of what she referred to as the “class of COVID,” Clinton has come to value flexibility and maintains a focus on whole health, which includes balancing mental, physical and spiritual aspects.

“A lot of my motivation is internal, because I have a vision of where I see myself going in life and the different steps I want to take to get there,” she said. “What the pandemic has taught me is to try to be flexible but forgiving – flexible in adapting to different situations, being open to new experiences and also forgiving yourself if you don’t meet specific goals. Don’t hold yourself to a specific time line, because life happens and things change. That’s not to say don’t prepare or don’t have goals and dreams, but make sure you are ultimately pursuing whole-person health and prioritizing that.”