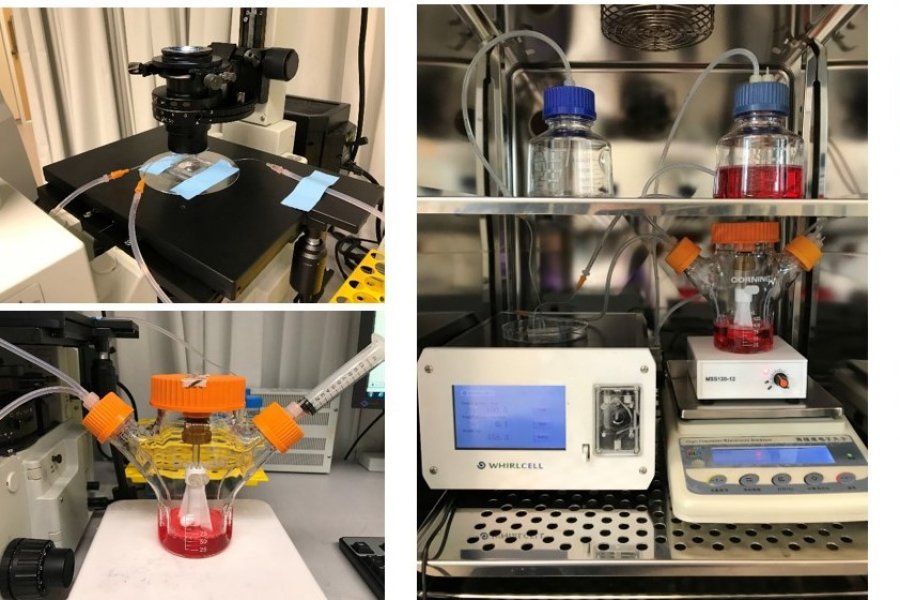 Researchers from Singapore-MIT Alliance for Research and Technology (SMART), MIT’s research enterprise in Singapore, have discovered a new way to manufacture human red blood cells (RBCs) that cuts the culture time by half compared to existing methods and uses novel sorting and purification methods that are faster, more precise, and less costly.

Blood transfusions save millions of lives every year, but over half the world’s countries do not have sufficient blood supply to meet their needs. The ability to manufacture RBCs on demand, especially the universal donor blood (type O+), would significantly benefit those in need of transfusion for conditions like leukemia by circumventing the need for large volume blood draws and difficult cell isolation processes.

Easier and faster manufacturing of RBCs would also have a significant impact on blood banks worldwide and reduce dependence on donor blood, which has a higher risk of infection. It is also critical for disease research, such as malaria, which affects over 220 million people annually, and can even enable new and improved cell therapies.

However, manufacturing RBCs is time-consuming and creates undesirable by-products, with current purification methods being costly and not optimal for large-scale therapeutic applications. SMART’s researchers have thus designed an optimized intermediary cryogenic storage protocol that reduces the cell culture time to 11 days post-thaw, eliminating the need for continuous 23-day blood manufacturing. This is aided by complementary technologies the team developed for highly efficient, low-cost RBC purification and more targeted sorting.

In a paper titled “Microfluidic label-free bioprocessing of human reticulocytes from erythroid culture,” recently published in the journal Lab on a Chip, the researchers explain significant technical advancements they have made toward improving RBC manufacturing. The study was carried out by researchers from two of SMART’s Interdisciplinary Research Groups (IRGs) —  Antimicrobial Resistance (AMR) and Critical Analytics for Manufacturing Personalised-Medicine (CAMP) — co-led by principal investigators Jongyoon Han, a professor of electrical engineering and computer science and of biological engineering at MIT, and Peter Preiser, a professor at NTU. The team also included AMR and CAMP IRG faculty appointed at the National University of Singapore and Nanyang Technological University.

“Traditional methods for producing human RBCs usually require 23 days for the cells to grow, expand exponentially, and finally mature into RBCs,” says Kerwin Kwek, lead author of the paper and senior postdoc at SMART CAMP. “Our optimized protocol stores the cultured cells in liquid nitrogen on what would normally be Day 12 in the typical process, and upon demand thaws the cells and produces the RBCs within 11 days.”

SMART’s new sorting and purification techniques using the modified DFF and DLD methods leverage the RBC’s size and deformability for purification instead of spherical size. As most human cells are deformable, this technique can have wide biological and clinical applications, such as cancer cell and immune cell sorting and diagnostics.

On testing the purified RBCs, they were found to retain their cellular functionality, as demonstrated by high malaria parasite infectivity, which requires highly pure and healthy cells for infection. This confirms SMART’s new RBC sorting and purifying technologies are ideal for investigating malaria pathology.

Compared with conventional cell purification by fluorescence-activated cell sorting, SMART’s enhanced DFF and DLD methods offer comparable purity while processing at least twice as many cells per second at less than a third of the cost. In scale-up manufacturing processes, DFF is more optimal for its high volumetric throughput, whereas in cases where cell purity is pivotal, DLD’s high precision feature is most advantageous.

“Our novel sorting and purification methods result in significantly faster cell processing time and can be easily integrated into current cell manufacturing processes. The process also does not require a trained technician to perform sample handling procedures and is scalable for industrial production,” Kwek continues.

The results of their research would give scientists faster access to final cell products that are fully functional with high purity at a reduced cost of production.

SMART was established by MIT in partnership with the National Research Foundation of Singapore (NRF) in 2007. SMART is the first entity in the Campus for Research Excellence and Technological Enterprise (CREATE) developed by NRF. SMART serves as an intellectual and innovation hub for research interactions between MIT and Singapore, undertaking cutting-edge research projects in areas of interest to both Singapore and MIT. SMART currently comprises an Innovation Center and five IRGs: AMR, CAMP, Disruptive and Sustainable Technologies for Agricultural Precision, Future Urban Mobility, and Low Energy Electronic Systems.

SMART research is funded by the NRF under the CREATE program.

The AMR IRG is a translational research and entrepreneurship program that tackles the growing threat of antimicrobial resistance. By leveraging talent and convergent technologies across Singapore and MIT, they tackle AMR head-on by developing multiple innovative and disruptive approaches to identify, respond to, and treat drug-resistant microbial infections. Through strong scientific and clinical collaborations, they provide transformative, holistic solutions for Singapore and the world.