Phil Donato got the idea for the latest “Crafts in Your Kitchen” event while scrolling through Facebook.

The director of alumni engagement and executive director of the Alumni Association at the University of Missouri–St. Louis came across a clip of “Skates and Plates,” a TV show featuring popular chefs who guide high-profile NHL players through cooking a dish. Donato began thinking about how to adapt the concept to UMSL.

The result was “Crafts in Your Kitchen: An Evening of Authentic Spanish Cuisine with Dean Ed Munn Sanchez and Brian Owens,” a virtual cooking demonstration held Thursday evening. The Office of Alumni Engagement and the Office of Executive Events coordinated the event. 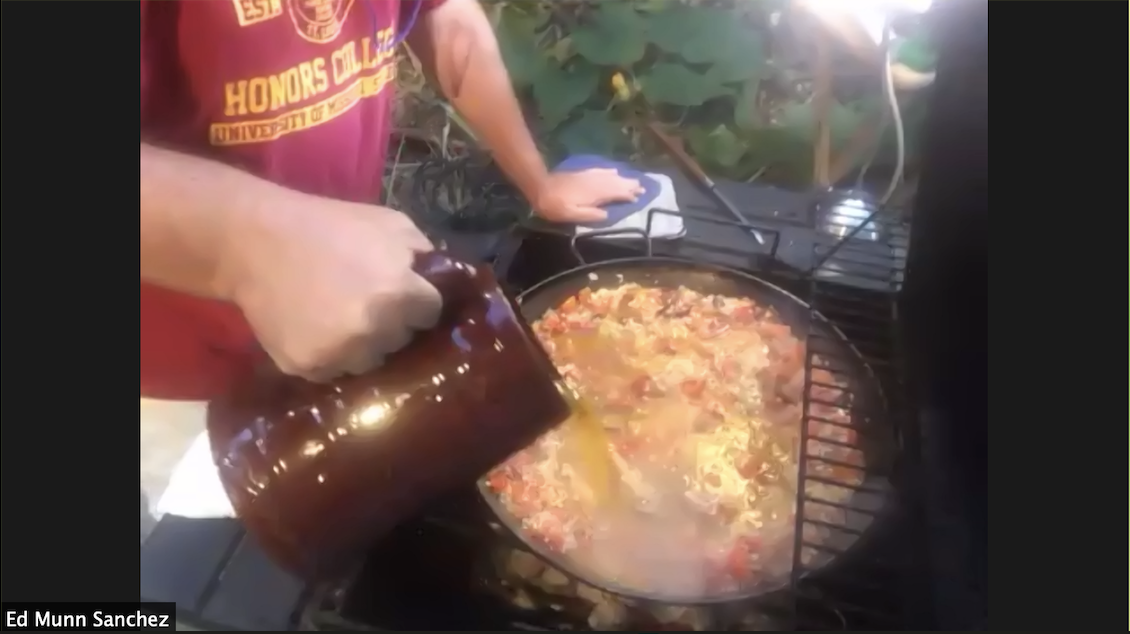 Ed Munn Sanchez demonstrated how to make paella while attendees followed along via Zoom.

After registering for the event, participants were given a list of ingredients and instructions that allowed them to follow along with Munn Sanchez and Owens through Zoom. A total of 125 people participated, making paella from kitchens and patios throughout the country.

“We decided, because we can’t gather people in groups like we normally do, we should do something that’s lighthearted and fun,” Donato said. “Brian Owens is a prominent alumnus and has a really engaging personality. We found out that Dean Ed Munn Sanchez wanted to do some type of cooking event for the Honors College, and we paired the two of them together.

“They spoke on the phone for the first time a week or so ago and got to know each other. From what I understand from both of them, they could talk to each other for hours. They clicked.”

Paella, a dish developed in Valencia, Spain, has been a staple of Spanish culture for centuries.

The dish has a long tradition in his family, particularly during Thanksgiving weekend.

“On Thursday, we’d have Thanksgiving, and then we would take the turkey carcass and make a giant stock and that was our Saturday paella stock,” he said. “We would have a giant paella contest where all of us would make different kinds of paella and then all claim ours was the best.”

Although Owens and Munn Sanchez used sausage, chicken and shrimp, paella can include a wide variety of ingredients and spices and can be made as a vegetarian dish.

During the demonstration, the conversation moved beyond cooking to discuss a range of subjects. Owens spoke about his latest album, titled “Love Came Down,” which can be found on iTunes and will be available on vinyl this fall.

He also discussed his connection to UMSL and his role at the university.

“One of the things I love is that they keep letting me come back,” he said. “I’m getting to develop a lot of young people through UMSL, and I think that my biggest joy is seeing alums pour back into the current students.”

The cooking demonstration was the second “Crafts in Your Kitchen” event. The series kicked off in June with a virtual beer tasting, and more events are coming up.

“When things are moving along normally, we reach out to alumni in all kinds of different ways and host events and seminars and get-togethers,” Donato said. “We’re limited on what we can do. But we can’t just let time pass and not reach out to people to show them that we’re still here and we care. This is one way that we’re trying to do that.”

Learn how to make paella by downloading the recipe and following along with a recording of the demonstration.