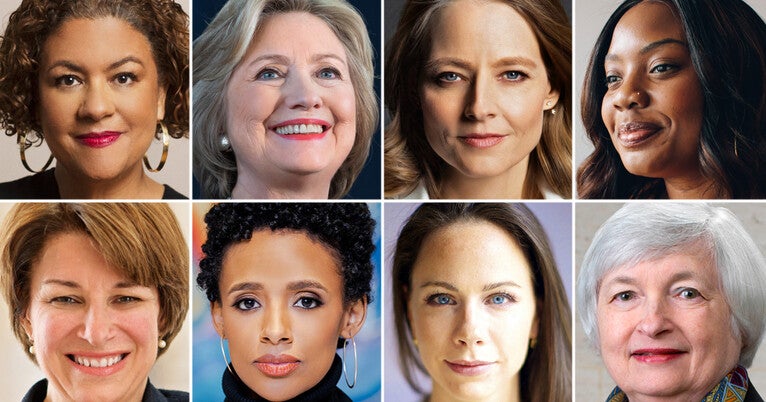 For the culminating event of the 50WomenAtYale150 initiative, which commemorates 50 years of coeducation in Yale College and 150 years of women at Yale, organizers convened a diverse group of Yale’s most inspiring women leaders to address the biggest issues of our time.

Panel discussions will focus on racial injustice, economic inequality, the fate of democracy, the importance of women’s voices in the public sphere, climate change, and the COVID-19 pandemic.

“Yale women are making a difference in our world on every consequential issue, and we wanted to learn from them — and to hear how each of us can contribute,” said Linda Koch Lorimer ’77 J.D., retired vice president for global and strategic initiatives at Yale and a former Yale trustee who co-chairs the 50 WomenAtYale150 Steering Committee.

Eve Rice ’73 B.A., a physician and current Yale trustee who chaired the 50th Anniversary Committee and co-chairs the Steering Committee, said that from the earliest planning stages, organizers wanted this event to serve as a call to action. “These are the issues that Yale women are passionate about,” said Rice. “We wanted the audience to be inspired, and to understand how to take action.”

The event marks the end of the year-long 50WomenAtYale150 initiative, which kicked off in September 2019 with an on-campus celebration of 50 years of coeducation. That first event included campus tours, talks, and the dedication of the 50th Anniversary Commemorative Stone by poet Elizabeth Alexander. Dozens of exhibits, performances, lectures, book talks, and films honoring the achievements of Yale women — many of which have been documented on the website celebratewomen.yale.edu — have filled the intervening months.

This final event — which includes a broad coalition of Yale women, across generations, from the undergraduate and graduate and professional schools — was initially planned for the Schwarzman Center, Yale’s new campus center for student life and the arts. Of course, the COVID-19 pandemic meant shifting to a virtual program. But, said Rice, “I see this as an opportunity to bring together an even larger community of women at Yale.”

Now, up to 1,000 people can attend the virtual event which will include, among the talks, a timely discussion on combating climate change. That discussion, “Planet Earth in Peril,” being held on Sat., Sept. 26, is scheduled to include Frances Beinecke ’71 B.A., ’74 M.F.S., former Natural Resources Defense Council president; Rhiana Gunn-Wright ’11 B.A., policy director of New Consensus who helped U.S. Rep. Alexandria Ocasio-Cortez craft the proposed Green New Deal; and environmental journalist Elizabeth Kolbert ’83 B.A., who wrote the Pulitzer Prize-winning book “The Sixth Extinction,” among others.

During a panel called “The Quest for a Just World,” which will kick off the conference at 3 p.m. ET on Sept. 24, alumnae will discuss systemic reforms needed to achieve racial equality. It includes activist, theologian, and leading generational voice Rahiel Tesfamariam ’09 M.Div.; Carmelyn Malalis ’96 B.A., commissioner and chair of the NYC Commission on Human Rights; and Diala Shamas ’06, ’11 J.D., staff attorney at the Center for Constitutional Rights and senior staff attorney supervising the CLEAR (Creating Law Enforcement Accountability & Responsibility) project at CUNY School of Law, among others.

The full program and registration link can be found here.

“On these panels, we have some of the most remarkable alumnae stepping up and applying cross-disciplinary expertise to talk about how we can work together to tackle these issues,” said organizer Wendy Maldonado D’Amico ’93 B.A. “All of these fields are interrelated and intersected.”

Details and registration for the Virtual Celebration of 50WomenAtYale150 being held Sept. 24-27 can be found here. All Yale alumni, students, faculty, and staff are invited to attend.