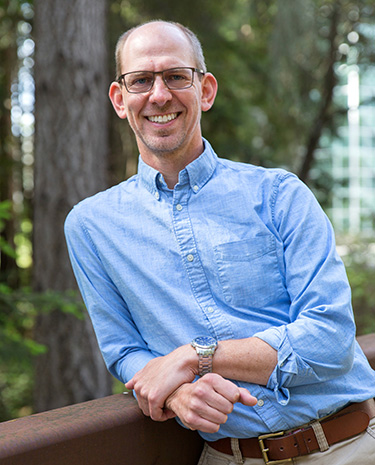 Jonathan Fortney, professor of astronomy and astrophysics at UC Santa Cruz, has been awarded the 2020 Paolo Farinella Prize from the Europlanet Society for his contributions to the understanding of the structure, evolution, and atmospheric dynamics of giant planets.

Fortney shared the prize with Heather Knutson, professor of geological and planetary sciences at the California Institute of Technology. The award ceremony took place September 22 during the EPSC 2020 virtual meeting and was followed by 15-minute prize lectures by the winners.

The annual prize, established in 2010 to honor the memory of Italian scientist Paolo Farinella (1953‐2000), acknowledges an outstanding researcher not older than 47 years (the age of Farinella when he passed away) who has achieved important results in one of Farinella’s fields of work. Each year the prize focuses on a different research area. In 2020, the tenth edition was devoted to the giant planets: Jupiter, Saturn, Uranus and Neptune, as well as giant exoplanets.

“I am honored to be selected for the 2020 Farinella Prize,” said Fortney, who directs the Other Worlds Laboratory at UC Santa Cruz. “I owe so much to my scientific mentors and collaborators who have helped me along the way. Paolo was an important scientist with a diverse range of interests, and it is great to be associated with his contributions to science.”

Fortney’s theoretical work has led to a much better understanding of the atmospheres, interiors, and evolution of giant planets. He has been able to provide theoretical evidence that helium in Saturn’s interior is dramatically concentrated into a helium-rich shell, and he has demonstrated that the pattern of enrichment in heavy elements in the solar system’s giant planets, compared to the sun, is also a relationship seen in giant exoplanets. Fortney has also developed sophisticated models of giant exoplanet atmospheres to understand their emitted spectra and atmospheric circulation.

Knutson is a leader in the observational characterization of the dynamics of exoplanetary atmospheres. She has led an ambitious observational program with both space-based and ground-based observatories to characterize hot Jupiters and sub-Neptune planets.

Both Knutson and Fortney lead active groups involving young researchers and students. Altogether, their work is providing the basis to better characterize giant planets and understand the formation of planets.

For 2020, the Farinella Prize also honors the memory of Adam P. Showman, who had accepted to be part of the prize committee, but passed away unexpectedly, leaving an immense body of theoretical work to understand the dynamics of planetary atmospheres.

“The past decade has seen great advances for our knowledge of giant planets both close to us, like Jupiter and Saturn, and much further for exoplanets,” said Tristan Guillot, president of the Farinella Prize Committee. “Heather Knutson and Jonathan Fortney have played a major part in those advances. The committee was unanimous in choosing them for the tenth Paolo Farinella Prize. It is also particularly fitting that both collaborated at some point in their career with Adam Showman. Adam was an inspiration for all of us, in particular in the field of the atmospheric dynamics of giant planets, until his untimely passing in February 2020. I’m sure that, as Paolo, he would have been proud of these nominations.”

Fortney received his B.S. in physics at Iowa State University and his Ph.D. in planetary science at the University of Arizona. He joined the UCSC faculty in 2008.