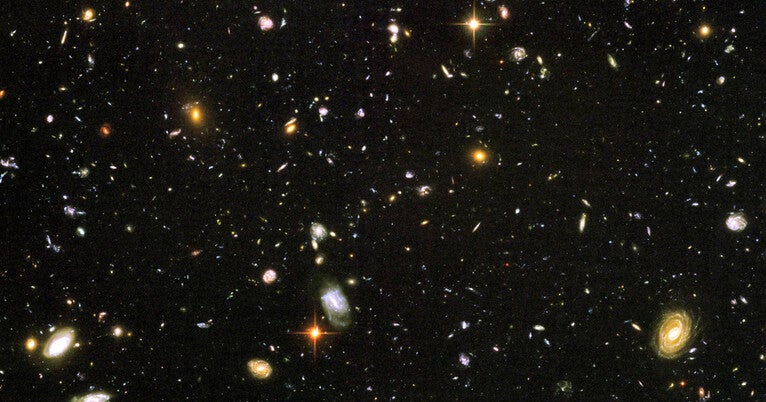 New observational research suggests that supermassive black holes — the mysterious, light-swallowing objects at the heart of nearly all large galaxies — are spinning like crazy.

It’s a finding that has sweeping implications for how black holes form, how they grow, and how the shape of the universe as we know it came into being. The research appears in a new study accepted for publication in the Astrophysical Journal.

“This isn’t the final word on black hole growth, but it’s a big step forward,” said the study’s first author, Tonima Ananna, a former Yale graduate student who is now a postdoctoral researcher at Dartmouth College. Her doctoral adviser was Meg Urry, Yale’s Israel Munson Professor of Physics and Astronomy and senior author of the study.

A black hole is a point in space where matter is compacted so tightly that it creates intense gravity. This gravity is strong enough that even light can’t escape its pull. A black hole can be as small as a single atom or as large as billions of miles in diameter.

Black holes have two critical properties: their mass and their spin rate. Yet not much is known about this spin. In recent years spins have been estimated for a few individual black holes, but this is the first time that scientists have been able to assess spin for the entire population of supermassive black holes (SMBHs), based on a representative sample.

A spinning black hole is slightly squashed compared to a black hole that doesn’t spin, the researchers explained. This allows the infalling gas to get closer to the black hole before it disappears inside, converting more of its energy into radiation.

Urry, Ananna, and their colleagues looked at the accreting efficiency of rapidly growing SMBHs using four space X-ray satellites: Chandra, XMM-Newton, NuSTAR, and Swift-BAT. They compared the X-ray light to the total mass in SMBHs today and found that matter drawn into SMBHs converted to radiation with high efficiency. This implied that most SMBHs must be rotating rapidly, the researchers said.

“Rapid spin suggests that supermassive black holes grow mainly by the accretion of gas they pull in, rather than by merging with other black holes,” Urry said. “Current theories assume both mergers and accretion add to black hole mass but there are almost no constraints on how much of either. Now we have observational evidence.”

The new study offers major insights into a key phase of the early universe, as well.

Astronomers know that for hundreds of thousands of years after the Big Bang, diffuse gas distributed throughout the universe was electrically charged, or ionized. But as this gas — mostly hydrogen — cooled, the atoms lost their ionization. For nearly a billion years after this cooling, the universe remained neutral, meaning its atoms were balanced between positive and negative electrical charges.

“Because light is easily absorbed by neutral atoms, we cannot peer back into that time. Only after the universe is nearly fully ionized can we see light from early stars, galaxies, and growing black holes,” Urry said.

“Among other things, this prevents us from observing much from that time because any early light from the first stars or galaxies is absorbed by the neutral hydrogen,” Urry added. “It’s like a curtain we can’t see behind. But once there were enough stars, the hydrogen became ionized and the nearer parts of the universe became visible.”

The new study found that young stars, and not accreting black holes, were primarily responsible for re-ionizing the universe.

The researchers added up all of the light created by accreting black holes, as tracked by the X-ray data. It totaled less than 10% of the light needed for re-ionization. “Our work rules out black holes as a larger contributor,” Urry said.

Urry and Ananna said their team’s work will help theorists build new cosmological models that trace the evolution of galaxies across the past 13 billion years. Those models rely on understanding how much energy accreting black holes deposit into their host galaxies.

“Our work gives a precise prescription for that profile of energy injection, all validated by experimental data,” Ananna said. “It’s no longer an assumption.”

The National Science Foundation and NASA helped to fund the group’s research.