Since 1936, the UC Davis Arboretum has been a flourishing home to countless flora and fauna and considered a safe haven for students, faculty and community members seeking a peaceful escape from their hectic schedules. It’s widely regarded as a campus landmark with a history that is as long as the trees are tall — or more precisely, back to the early days of the university.

In fact, the Arboretum and Public Garden, as it is now known, is a beloved jewel of the campus formed through a merger of the Arboretum, the Putah Creek Riparian Reserve and the Grounds and Landscape Services division.

Knowles Ryerson, then-dean of the College of Agriculture, at left, stands at the podium, while Chancellor Emil Mrak sits, during the dedication of the Carolee Shields Garden in the Arboretum on May 4, 1965. At right, a gazebo is the centerpiece of the Carolee Shields Garden today. (UC Davis Special Collections photo; Gregory Urquiaga/UC Davis photo)

Among its objectives, the Arboretum emphasizes engaged scholarship and learning for UC Davis students, with Assistant Vice Chancellor and Director Kathleen Socolofsky and others working to institute what is now the Learning by Leading™ program. “It’s just part of our DNA, to have students in leadership positions and give them that responsibility,” Socolofsky said.

“This work that we’re doing is really preparing students for careers into the future,” said Carmia Feldman, assistant director of the Arboretum, “to work on important societal issues and have the preparation and leadership training and experiences that gives them an edge when they’re going out into the workforce.”

“It’s just part of our DNA, to have students in leadership positions and give them that responsibility.”
— Kathleen Socolofsky, assistant vice chancellor and arboretum director

Feldman characterized the Learning by Leading training as being “a scaffolded mentorship model with staff mentors and peer mentors. Students take on successively greater leadership responsibilities as they go through the program.” She described the series of steps a student might take, where he or she begins on a team of students, working up to becoming a student leader of a team or co-coordinator.

“And then they’re leading all the other interns who are taking on their smaller leadership projects,” Feldman said, ultimately allowing them to become apprentices in different operational areas, such as horticulture, nursery, education and fundraising.

Feldman added, “We often have students who stay in the program for several years because they can get something new out of it as the quarters go on.”

The framework for Learning by Leading has been adopted by multiple other botanical gardens and universities across North America, including Cornell University, University of Georgia, American University/Smithsonian Gardens, Louisiana State University and Humber College in Canada. 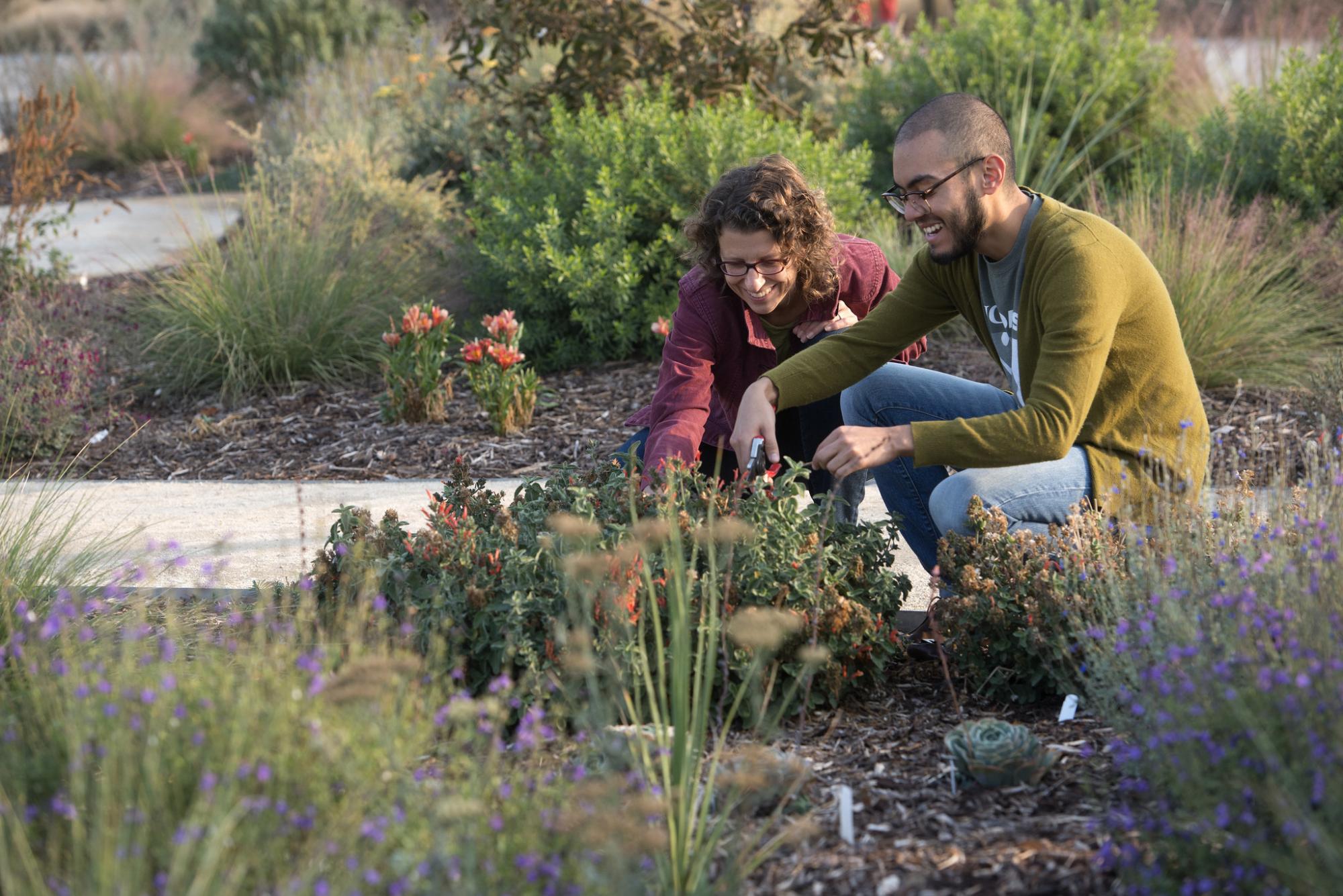 The UC Davis Arboretum and Public Garden was founded on a constant trajectory toward relevance and innovation, and Socolofsky said she is determined to continue to push it in a direction of leadership. Part of the way she has done this — in conjunction with Associate Vice Chancellor for Campus Planning and Environmental Stewardship Robert Segar — is through the development of the UC Davis GATEways Project (Gardens, Arts, and The Environment), which connects the landscapes of the Arboretum to the broader research and education taking place at the university.

“We could be the traditional botanic garden, or we could be one that’s really relevant to the future of the university and to the community, and provide lifelong learning,” Socolofsky said.

It’s this push toward innovation that garnered interest from Smithsonian Gardens, where Socolofsky was invited to speak about the GATEways Project. The world-famous museum in Washington, D.C., has been inspired to connect its gardens and landscapes more meaningfully to its museums using the framework of the UC Davis program, Socolofsky said. She said she knew that “if their landscapes could be connected to tell the story of these museums, they would be even more impactful.”

And now the Arboretum’s impact is expanding through another collaborative effort with Segar. This joint project, the UC Davis Living Landscape Adaptation Plan, was developed to address climate change by creating a climate-resilient campus landscape for the future. Learning by Leading students are helping develop strategies, such as how to grow trees for the campus landscape that will survive under future climate projections. 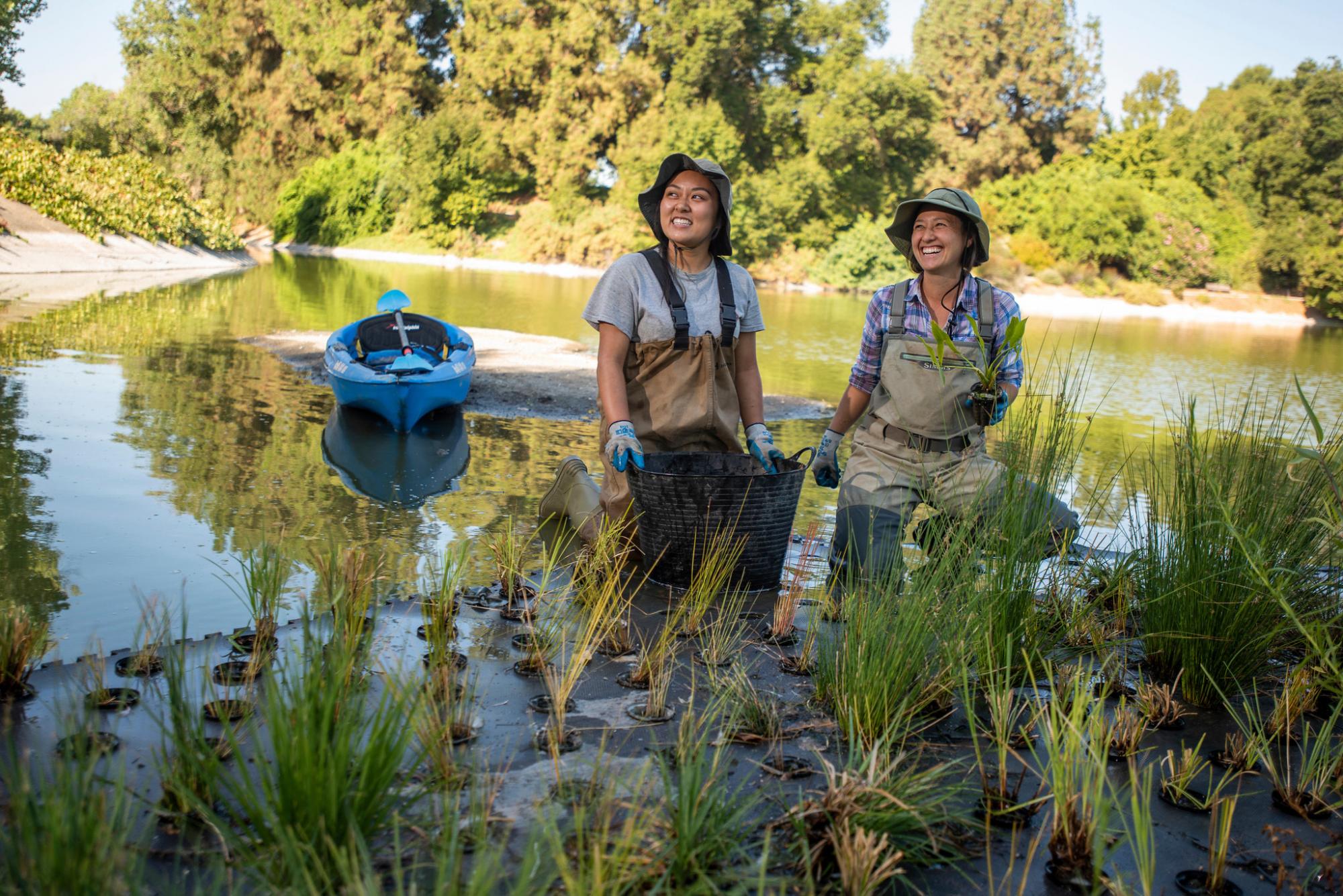 Faculty members from across disciplines use the “green classrooms” of the UC Davis Arboretum to teach in creative and engaging ways that provide students with hands-on experience.

A wide range of courses utilize the Arboretum’s gardens and scientific collections each year. The Arboretum is uniquely equipped to serve as an academic resource, akin to a campus museum or library. Arboretum staff support faculty and students in planning curricula, providing specimens and documents for research, lecturing and giving garden-based tours, and showcasing student projects and faculty research to garden visitors through the UC Davis Arboretum GATEways Project. Many student projects have informed the development of the Arboretum, produced new exhibits, and promoted innovative technologies and digital media.

If you have questions about how the Arboretum can support your instruction, or to share how you have used the Arboretum in teaching, a course assignment or an independent project, email Shannon Still at still@ucdavis.edu.

Growing into the role

Socolofsky’s trajectory has been impressive, as well. Before her work at UC Davis, Socolofsky worked for the Desert Botanical Garden in Phoenix, where she received support from the National Science Foundation to develop an innovative model for botanic gardens as interactive science centers.

When Socolofsky was hired in 1998 as the Aborbetum’s first full-time director, she said the Arboretum’s reputation preceded itself. She recalled a colleague, who had been the director of horticulture for Disney, applauding her decision to go to UC Davis.

“So many horticultural and botanical luminaries have been at UC Davis,” she remembered hearing. This colleague, Socolofsky said, referred to the horticulture work being done at Disney as being largely influenced by the same people who helped to support the development of the Arboretum at UC Davis. Suffice it to say, Socolofsky had a legacy to uphold.

In 2011, Socolofsky was asked to manage the entire campus landscape at UC Davis. In response, she said she thought, “Well, if we could imagine the campus as a public garden, we [could] elevate everyone’s thinking about what it could be.”

She continued, “It already had all the foundational elements of a public garden — it has display gardens and recreation gardens, as well as scientific and sustainable gardens.” Building off these successes, Socolofsky said, made it possible to reposition the campus landscape as a key engagement asset for the university. 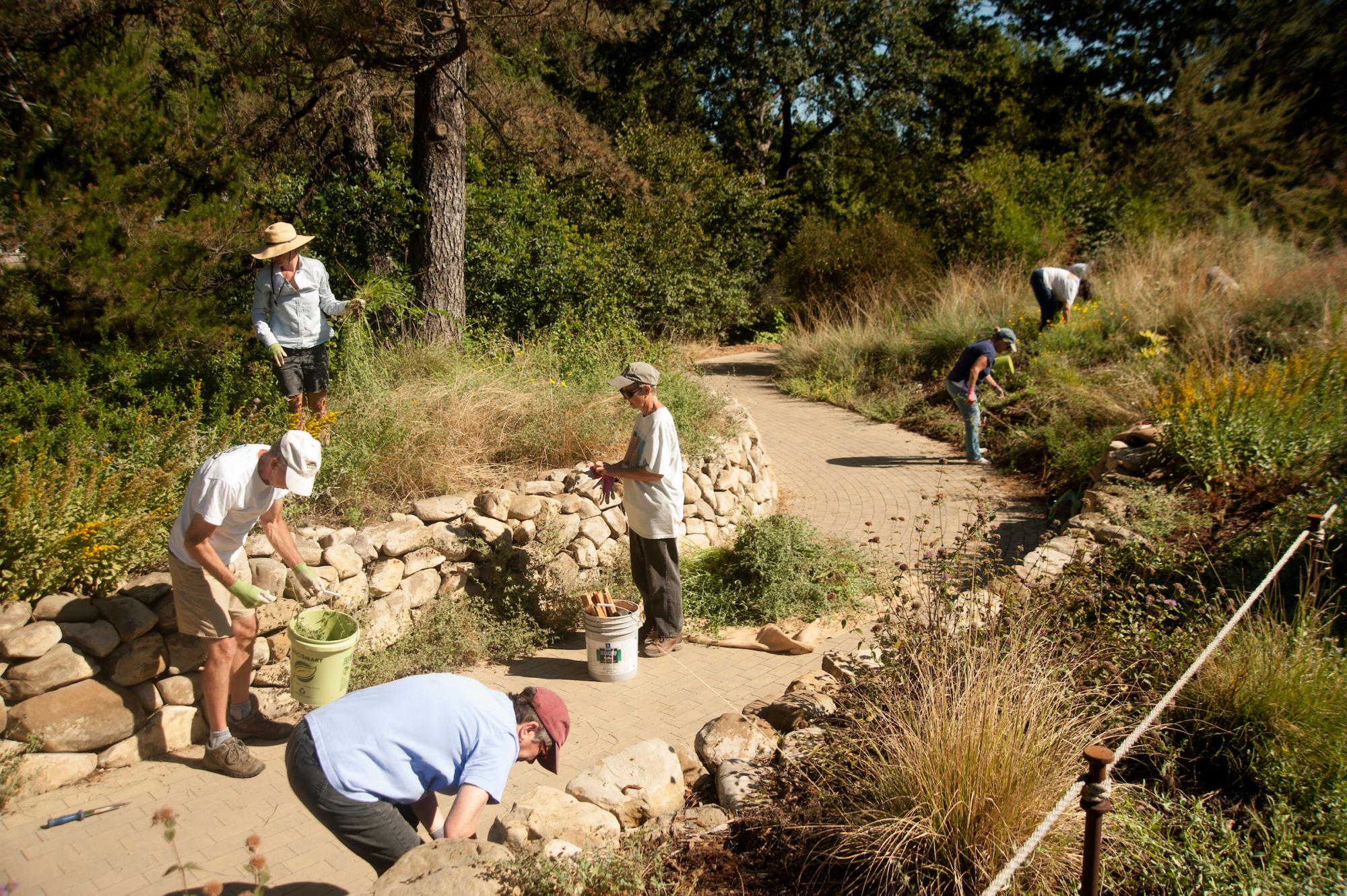 Volunteer groups come out weekly — as shown here in July 2016 — to weed individual sections during the weed cleanup in the Arboretum. (Gregory Urquiaga/UC Davis photo)

Sticking to its roots

Despite its reputation as a leading botanical garden, the Arboretum is still firmly grounded in dedication to the community grassroots that have supported it from the beginning. Its community support group, Friends of the UC Davis Arboretum and Public Garden, currently comprises close to 2,000 members, 250 or more of which are active volunteers.

In 1971, the Arboretum faced a new budget model, one that relied on the community more than it had. Thankfully, the community came together.

“They pulled up irises, sold them, bought hoses and watered the plants until there was a little bit of money in the budget again,” Socolofsky recalled. “They started growing plants for the plant sales to make enough money just to keep the plants alive. Now funds from the plant sales, coupled with donations and endowments, are significant sources of external support for our organization.”

In addition to the community group — which turns 50 in 2021 and focuses on community-based engagement — a second one, called the GATEways Planning Council focuses on building larger initiatives like the GATEways Project and Learning by Leading program.

These two groups complement each other by continuing the Arboretum’s grassroots support from the community and also helping to grow its programs. “We really think it’s important to honor and advance the tradition of the botanic garden that was started by faculty in 1936, as well as build our impact for the future,” Socolofsky said. 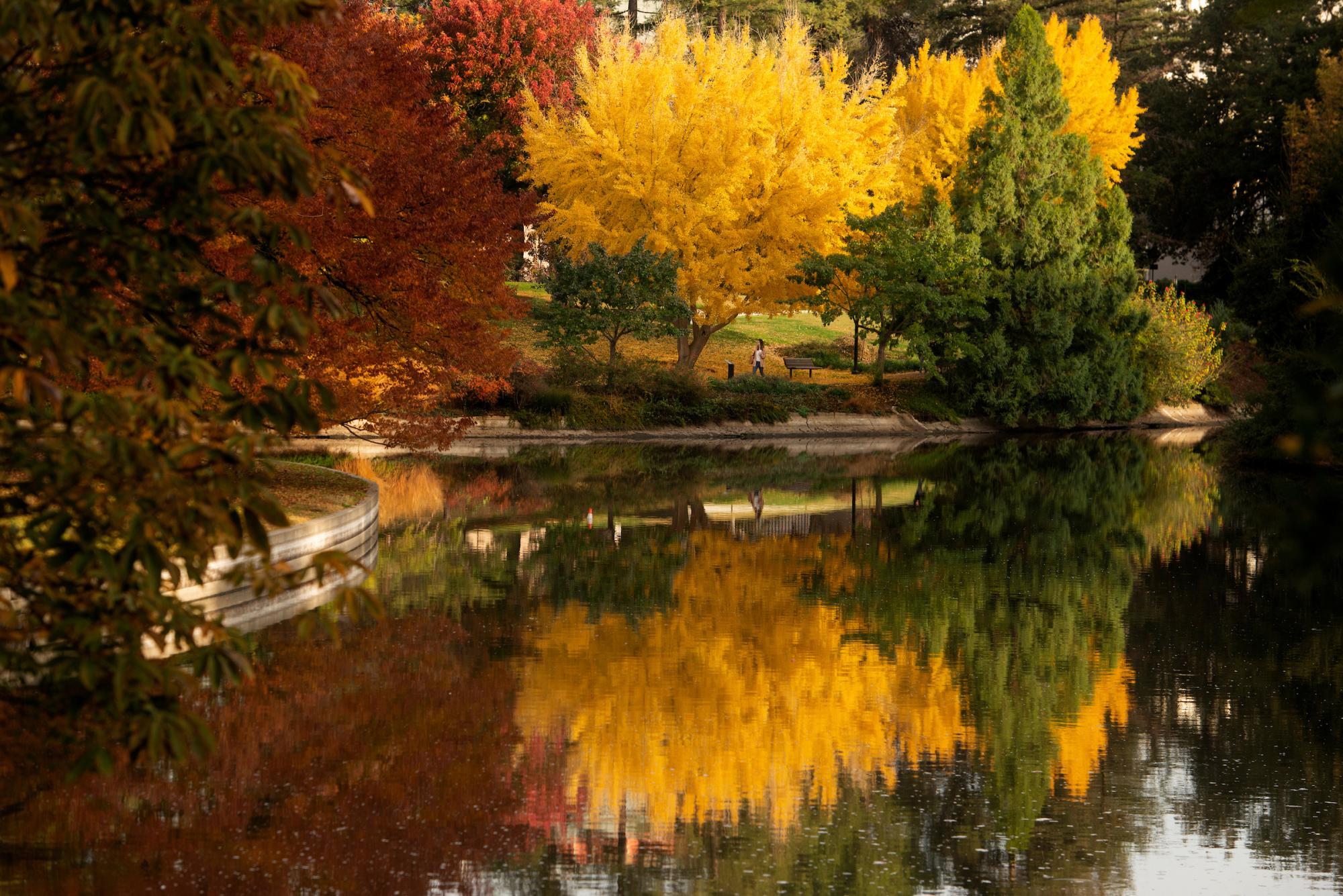