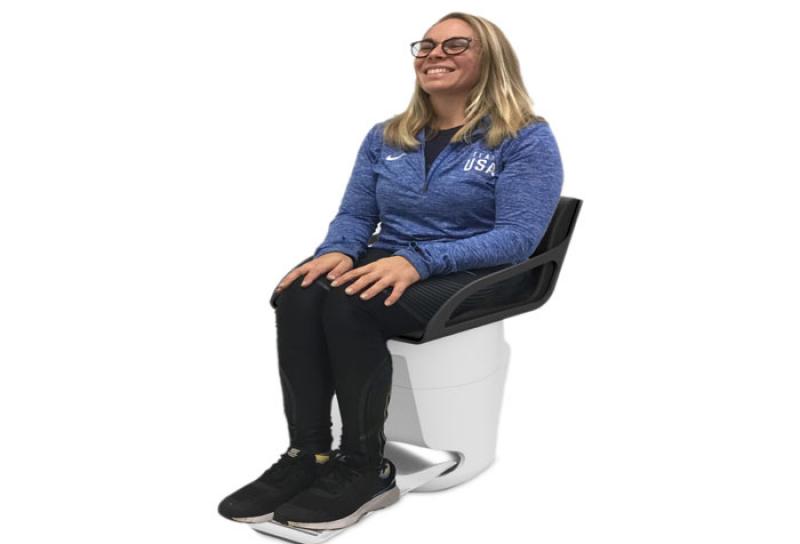 So Bleakney and his colleagues from Disability Resources and Educational Services, as well as cross-campus collaborators from the Grainger College of Engineering, and the College of Fine + Applied Arts, embarked on a plan to disrupt the wheelchair market.

“We wanted to design something that would break the mode of traditional wheelchairs, which has been essentially a chair supported between two large drive wheels with two casters, and has not changed since the first patents awarded in the 1860s,” said Dr. Elizabeth Hsiao-Wecksler, a professor in the Department of Mechanical Science and Engineering in the Grainger College of Engineering and the principal investigator on a project that recently received a $1.5 million grant from the National Science Foundation under the National Robotics Initiative program to develop a wheelchair that will provide individuals with a physical disability a new and novel mode of mobility.

Hsiao-Wecksler said the project was started in 2018 in response to the call for “radical improvements in the mobility and independence of people with lower-limb paralysis through smarter assistive technology” by the Toyota Mobility Unlimited Challenge.

Bleakney had worked with Toyota on a previous project, so he was intrigued by the opportunity, and he spoke with then-DRES director Dr. Pat Malik, whose husband, Ron, is a daily wheelchair user.

“The intent was to achieve an interdisciplinary effort, to combine the tradition and knowledge we have at DRES and AHS as leaders in disability access with the incredible resources that exist across campus,” he said.

“And Pat, Jeannette Elliott, Arielle Rausin, and I each bring a unique and personal disability experience perspective to the project. Pat, who’s married to a daily wheelchair user; Jeanette, who in addition to being the physical therapist at DRES uses a prosthesis and manual wheelchair; and Arielle and me as daily wheelchair users.”

Hsiao-Wecksler was asked to join the team since she had been working on hardware design of devices to assist people with disabilities and also wheelchair technology.

“I have worked on both wheelchair propulsion biomechanics with (KCH faculty) Jake Sosnoff and Ian Rice, and wheelchair wheel development with IntelliWheels, Inc., which was a local start-up that I, Jake Sosnoff, and our graduate students created.”

Three mechanical engineering graduate students—Chenzhang Xiao, Yinan Pei, and Yu Chen—worked on PURE prototypes, and Dr. William (Bob) Norris of Grainger, of Grainger (ISE faculty) who has expertise in control of autonomous vehicles and robots, was brought on as a co-PI. Dr. João Ramos, also of Grainger (MechSE faculty) and with experience with design and control of robotic devices, was added for the NSF proposal.

Illinois’ project reached the top 10 out of 80 applications for the Toyota Challenge. Bleakney and project co-PI Dr. Deana McDonagh of FAA represented the team in London for the competition, but only the top five submissions were funded.

Illinois’ team was unbowed and continued to move ahead, knowing it had a good idea.

“Without question everyone on the team recognized the value of the project and the need to look for funding opportunities to continue working on it,” Bleakney said.

“The traditional manual wheelchair needs to be reimagined,” McDonagh added.

Although Bleakney works with some of the best wheelchair athletes in the country, including multi-marathon winner Daniel Romanchuk, he knows there is a broader application for PURE.

The device’s name—PURE—came about as a result of a team meeting, Hsiao-Wecksler said.

“We wanted to express the organic and pure nature of using lean-to-steer technology to propel the device, rather than requiring constant occupation of the hands such as with a manual wheelchair,” she said. “This mobility device will utilize personalized driving calibration to accommodate different trunk function abilities and custom seating of each user. The design is a uniquely different mode of rolling instead of the traditional wheelchair with two drive wheels and castors. And it will be a wonderful mobility experience for the user.”

Hsiao-Wecksler added that PURE’s footprint is “smaller than a manual wheelchair’s, being no larger than the user’s body dimensions while seated, providing access to smaller spaces such as inaccessible public restroom stalls.”

“We look at how can we decrease acute injuries that may occur from falling,” he said.“And we wanted to mitigate that risk, but also mitigate the risk posed to the shoulders from pushing a wheelchair around on a daily basis.”

And McDonagh said, “health is not just the absence of disease. Health is connected with one’s sense of independence, mobility and ability to live the life you need to live. This device will enable the user to traverse a more diverse terrain while holding a coffee in one hand! Or holding the hand of a loved one. We are blending the functional with the emotional needs of real people.”

A prototype of PURE was developed for the Toyota Challenge in 2018, but since it had rather inexpensive components, it could only support a payload of 25 pounds. A second-generation prototype is in the works, one that can support a rider up to 250 pounds and operate on level flooring.

Thanks to the NSF grant, plans are in the works for more development of the second-gen device and then a third-generation chair with more advanced control. Eventually, the researchers see commercial opportunities, and recently submitted an application to the U.S. Patent and Trademark Office.

“We think the value is transformative enough that it can be used by not just daily wheelchair users, but also by a broader audience,” Bleakney said. “Envision being at Disney World. And instead of hundreds of three-wheeled scooters being driven around by folks needing mobility assistance, PURE is being used and providing a much more inclusive and fulfilling experience. So I think it has a fairly broad application to a lot of different individuals who would benefit from it.”