NC State researchers have determined a postharvest treatment that significantly reduces crop loss due to internal necrosis in Covington sweetpotatoes. About 90% of North Carolina’s sweetpotatoes are of the Covington variety. This treatment will save N.C. sweetpotato producers millions of dollars.

The Covington variety of sweetpotatoes produces a high yield of fairly uniformly shaped storage roots that are delicious, nutritious and store well. However, within a few years of the variety’s commercial release, growers and consumers started noticing black spots or patches on the inside of the sweetpotatoes.

“Internal necrosis was becoming a big issue in the industry, so the Sweet Potato Commission decided we needed a task force to look at this from across the college,” said David Godwin, a third-generation sweetpotato producer who has served on the North Carolina Sweet Potato Commission in a number of roles. “When you’ve got an issue where you really don’t know what’s happening, you need to get somebody from every field and aspect of agriculture and life sciences to work on it.” 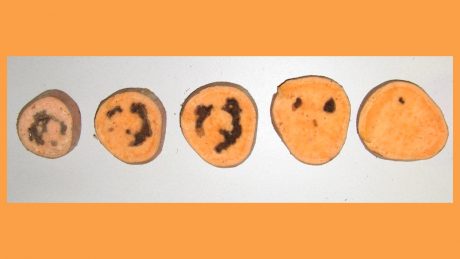 Internal necrosis is found at the end of the root closest to where the vine was. Image courtesy of Jonathan Schultheis and HortTechnology paper Vine Removal Prior to Harvest, and Curing Duration and Temperature Affect the Incidence and Severity of Internal Necrosis in ‘Covington’ Sweetpotato.

Internal necrosis is a physiological disorder, not caused by a pest or pathogen, where the sweetpotatoes develop black spots and patches on the inside of the root. These black patches are only found in the end of the root closest to where the vine was. Producers cannot tell if a root has internal necrosis without cutting into it.

According to Jonathan Schultheis, a professor and Extension specialist in the Department of Horticultural Science who led the task force, a survey of sweetpotato storage rooms in 2010 and 2011 found 90% of the storage rooms had at least some roots with internal necrosis. In most cases, less than 10% of the sweetpotatoes examined had these minimal black patches or specks. However, a few producers had more than 30% affected roots, some with more severe symptoms, making them not marketable.

By changing the curing process — a heat treatment that encourages the roots to heal cuts and abrasions and converts starch into sugar after harvesting and before storing in a cool storage room — Schultheis and the task force determined a method to greatly reduce the incidence and severity of internal necrosis in Covington sweetpotatoes.

Before determining that the curing conditions were a significant factor in internal necrosis, the task force looked at a number of different possible causes, Schultheis said.

After all those potential causes were ruled out, the task force turned to examining the growing conditions and storage conditions.

David Godwin is a third-generation sweetpotato producer who has served on the North Carolina Sweet Potato Commission in a number of roles. (Photo from 2016).

To reach a more definitive answer, Schultheis, Godwin and several other key people in the sweetpotato industry came up with the idea for a research study to understand the main cause of internal necrosis. Schultheis and Fernando Montero de Espinosa Baselga, a former master’s student of Schultheis’, coordinated the study with key N.C. sweetpotato growers and packers. They took roots from six producers and then cured and stored them at six different storage facilities, while monitoring the curing temperatures and relative humidity.

At the same time, Montero de Espinosa Baselga evaluated sweetpotatoes grown under five different growing conditions on three partner farms and the Lower Coastal Plain/Cunningham Research Station in a more controlled study. In this published study, he cured the roots at either 75 degrees or 85 degrees for three days, one week, two weeks, three weeks or five weeks, Schultheis said. He found that a lower curing temperature and shorter curing time greatly reduced the percentage of roots with the black patches of internal necrosis.

The task force shared these results with the North Carolina sweetpotato industry in 2017 and updated the recommended curing conditions for Covington sweetpotatoes.

“I know in my heart that the North Carolina sweetpotato industry would not exist today in the same size and all, if we continued to have the internal necrosis problem,” said Godwin, who graduated from NC State in 1987 with a bachelor’s degree in biological and agricultural engineering. “It was becoming such an issue with the variety, we were beginning to lose buyers. We would have lost the Covington as a variety and I don’t think we would have anywhere near the number of acres we have now.”

Schultheis agrees that the new curing conditions have significantly helped the North Carolina sweetpotato industry, and believes spearheading the task force and being a part of finding a solution was one of the most rewarding accomplishments in his career.

“The bottom line is, this has saved the industry millions of dollars of crop loss,” Schultheis said. “One grower called me up and told me he lost a million dollars due to internal necrosis in one season. This solution also helped maintain the reputation of North Carolina for the high-quality sweetpotatoes we produce.”

In addition to the interdisciplinary researchers on the task force, determining the solution for internal necrosis would not have been possible without the assistance of Extension agents, research station personnel and partner farms, Schultheis added.

“I see the N.C. Plant Sciences Initiative as being the way that we can get all of the different departments and colleges at NC State involved in helping us grow agriculture in North Carolina,” Godwin said. “I think it’s going to solve a lot of problems, more economically and a whole lot faster. That’s why the Sweet Potato Commission supported the initiative financially and politically.”

In fact, some of that interdisciplinary work for N.C. sweetpotato producers is already underway. As part of the N.C. PSI’s Big Data for Better Sweetpotatoes project, Mike Kudenov, a researcher in the Department of Electrical and Computer Engineering, is working on a new system that will be able to detect internal damage in sweetpotatoes, whether it is caused by internal necrosis or pests and diseases.

Our research addresses grand challenges — and overcomes them.

This post was originally published in College of Agriculture and Life Sciences News.