CHAMPAIGN, Ill. — Printmakers employed by the Works Progress Administration in the 1930s created images that dealt with issues of labor unrest, racial violence, immigration and the rise of fascism – subjects that remain relevant today.

Among its strong collection of works on paper, Krannert Art Museum holds hundreds of WPA prints. Many of them will be on view as part of the exhibition “Pressing Issues: Printmaking as Social Justice in 1930s United States” that opens at the museum Oct. 3.

Curator Kathryn Koca Polite organized the exhibition in response to the upcoming election and the way these works address many similar issues the U.S. is confronting today. WPA prints often are seen as nostalgic or celebratory, but these are very different, she said. 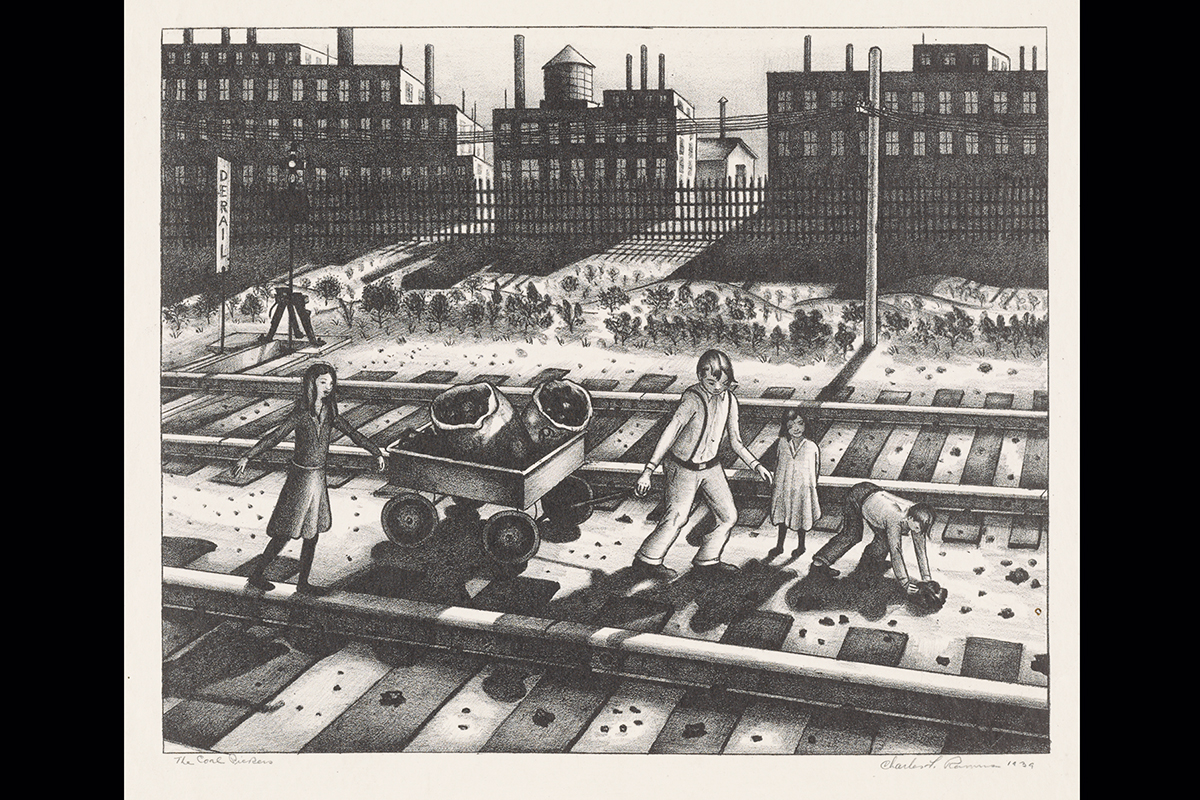 Guen Montgomery, a University of Illinois, Urbana-Champaign art professor who has a background in printmaking, called it a medium of the people.

“Printmaking is a democratic medium. It lends itself to dissemination. It has the ability to exactly replicate information. It’s almost a precursor to the technological moment we’re in now. Printed matter was the first step toward a technological revolution,” Montgomery said.

“In work from that time, I see an emphasis on the power of collectivity, particularly for marginalized people,” she said. “In the context of the election and the pandemic, it’s really interesting and perfect for this show to be happening in this moment. The WPA was a time of great government support. We weathered a difficult period in our country through general government assistance programs that we seem less inclined to support now.” 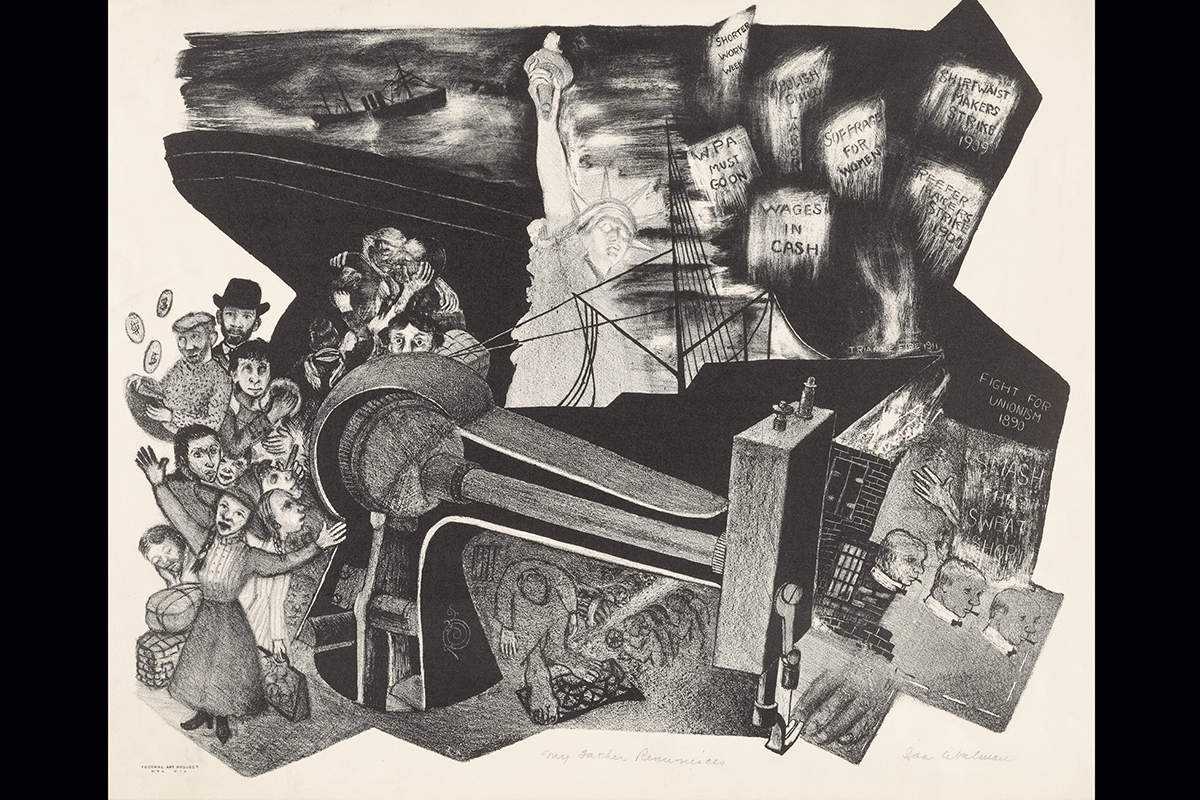 “My Father Reminisces,” by Ida Abelman. The dark, moody print is one of art professor Guen Montgomery’s favorites. “It uses the sewing machine as an architectural element and framing device. This could be interpreted as a representation of autonomy through labor or a reference to unjust labor practices. The print includes protest posters in the background referring to women’s suffrage and racial justice that anticipate our current political moment,” she said.

The exhibition is organized around themes: labor issues, discrimination and racial violence, and the rise of fascism. The prints from that time focusing on issues of labor looked primarily at male laborers, such as coal miners and industrial workers, Koca Polite said. The KAM collection includes prints by women artists illustrating scenes of female labor, however, that she said were vital to include.

“Women laborers were a significant part of the economy at that time, but they weren’t often mentioned by male artists in their works,” she said.

“Custom Made” by Riva Helfond shows a woman leaning over a sewing machine, working late at night.

“The woman looks exhausted. With her face in shadow, she stands in as a symbolic everywoman, frantically trying to finish another garment to earn more money,” Koca Polite said. 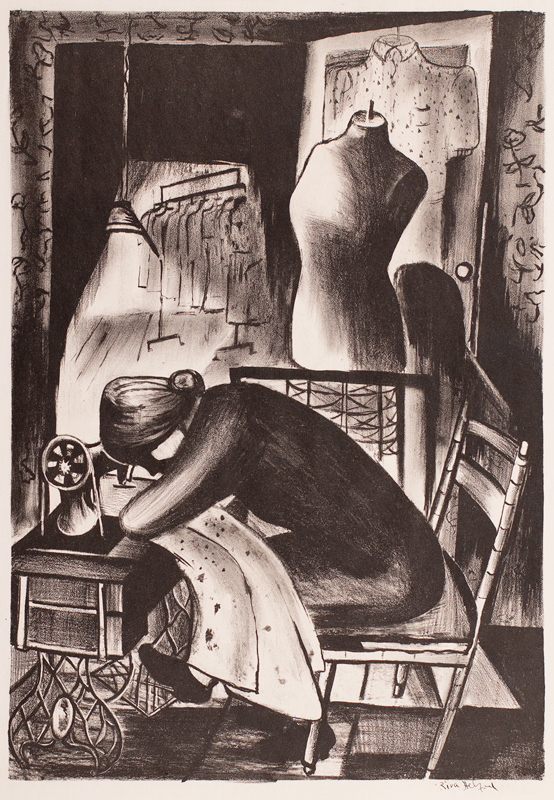 “Custom Made,” by Riva Helfond.

Another group of prints depicts the plight of immigrants, many of them Jews who were forced to leave Eastern Europe and come to the U.S., where they were not well-received, Koca Polite said.

“The prints show families with all their possessions with them, walking through treacherous terrain and isolated, conveying a sense of being simultaneously estranged from their homeland and disenfranchised in their new country. It has some strong resonances to immigration today, particularly the vitriolic nationalist policies aimed at people seeking refuge from violent countries,” she said. 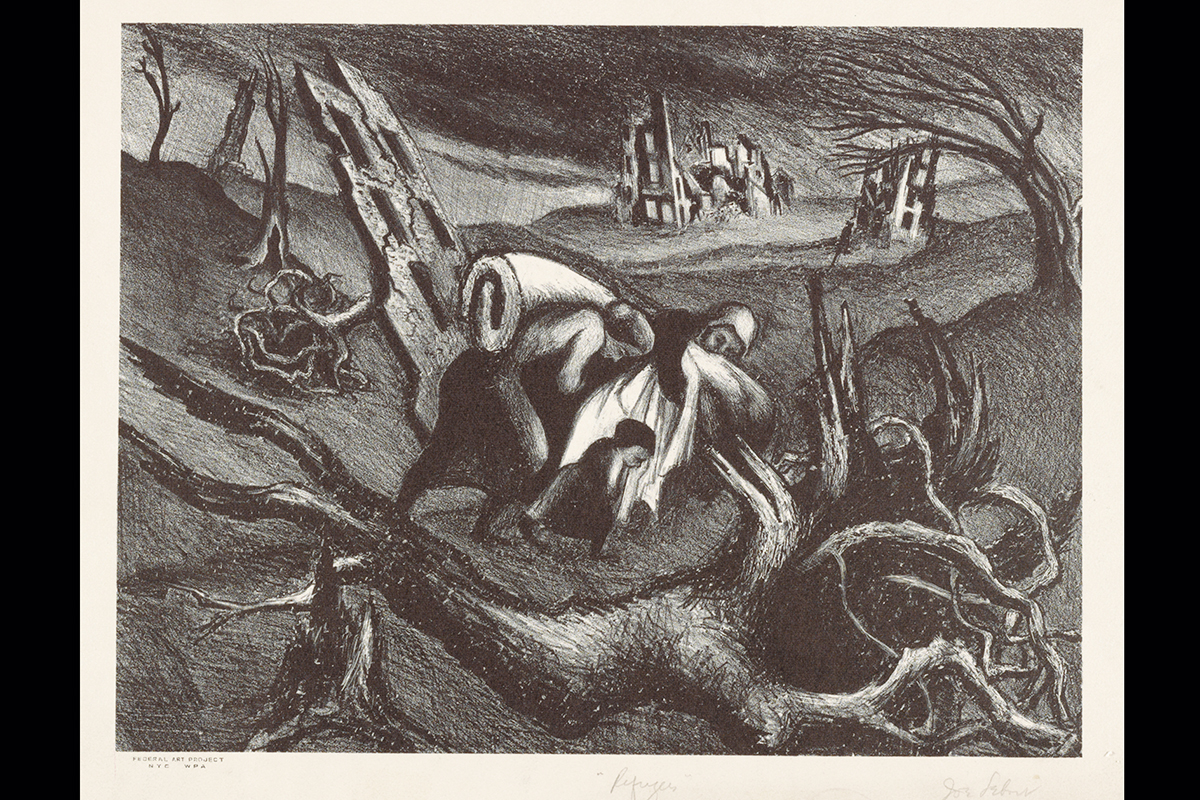 Artists during the 1930s also created images denouncing racial violence, including lynchings. “Manhunt” by John Steuart Curry shows a white man on horseback and another waving a gun as a dog lunges forward in search of their victim.

One of the few color prints in the exhibition, “Ku Kluxers,” is on loan from the University of Michigan Museum of Art, along with “Manhunt.” “Ku Kluxers” shows three men in white hoods and robes splattered with blood.

“The print is very hostile and places the blame on these individuals who hide their identities. It’s filled with hate and aggression, and it’s really quite condemning,” Koca Polite said.

The final section of the exhibition features prints dealing with the rise of fascism, including some responding to the Spanish Civil War, such as “Bombing” by Boris Gorelick.

“You can see the influence of Salvador Dalí in this piece,” Koca Polite said. “Anti-fascist prints tended toward the psychological in subject matter. Gorelick heightens the trauma caused by the conflict through fragmented and distorted figures, whirling in this scene of destruction. Incorporating modern visual techniques, such as cubism and surrealism, the artist sympathizes with the Spanish people fighting the fascist nationalists by expressing the anguish and anxiety they were certainly feeling.

“I’m hopeful people see that in the present day there are powerful connections to this past. Although the country has made progress in many ways throughout the last 90 years, the fact that we must collectively continue to fight for social issues such as gender and racial equality and against harmful political ideologies is incredibly disappointing,” she said. “I’m hoping it spurs people to think about how we live, how other people live and recognize our history in how this country has treated its inhabitants in the past.”

“Pressing Issues” will be on view at KAM through Dec. 23 before traveling to the Weisman Art Museum at the University of Minnesota. It is sponsored in part by grants from the International Fine Print Dealers Association, the Wyeth Foundation for American Art, and the College of Fine and Applied Arts at Illinois.