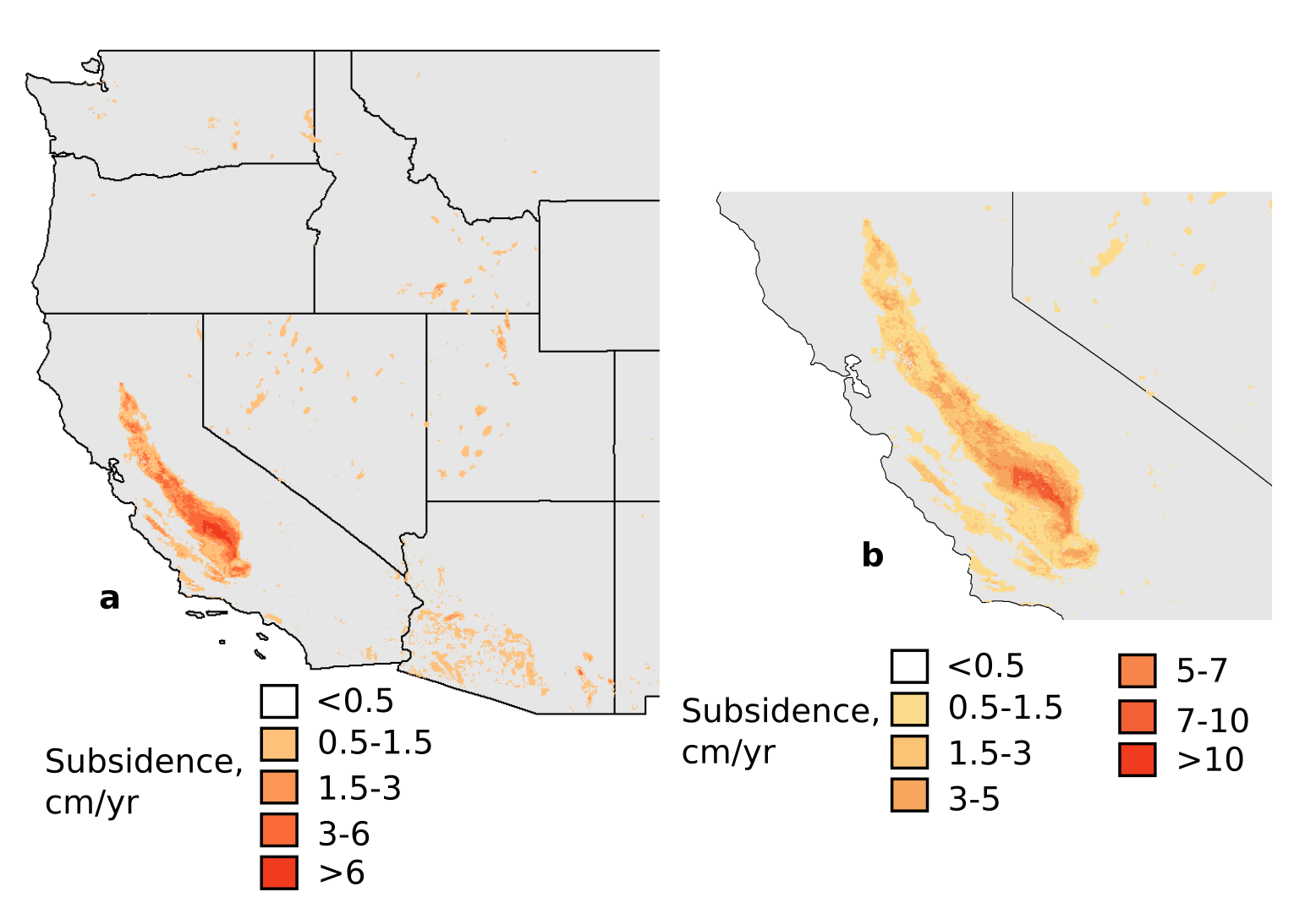 Images indicate the estimated rate of land subsidence in areas with high groundwater use in the western U.S.

Excessive pumping from underground aquifers can cause the surrounding land to sink and lead to damage to streets, bridges and other infrastructure, reduced groundwater storage, and contaminated drinking water, according to researchers at Missouri S&T. They are using a form of artificial intelligence known as machine learning to map the sinking – called land subsidence – to help water policy officials make informed decisions.

Dr. Ryan Smith, an assistant professor of hydrology at S&T, says rising temperatures, changing precipitation patterns and increasing demand for freshwater are putting additional strain on aquifers. More frequent and extreme droughts as well as floods reduce the ability to capture and store water. The western U.S. has been particularly hard hit because of limited surface water availability, rapidly growing populations and high-value crops that require large amounts of water.

Traditional methods of measuring land subsidence in areas of groundwater extraction are not only time consuming, but also expensive and could result in errors or gaps, Smith says. Conversely, machine learning quantifies the relationship between widely available groundwater data and land subsidence and can be used to predict future subsidence. The data include rates of evaporation from land surface and plants, land use and sediment thickness.

To carry out their research, Smith and his Ph.D. student, Sayantan Majumdar, compiled hydrologic and subsidence data from satellites and ground-based GPS stations across the western U.S., including California, Arizona, and Nevada.

California accounts for 75% of total subsidence in the western U.S. Groundwater irrigates millions of acres of cropland in California’s Central Valley, a 450-mile swath of agricultural land where one-third of the nation’s fruits and vegetables are grown. It is one of the most heavily affected areas for subsidence. Smith and Majumdar’s model estimates that the land is sinking over two inches a year over a large area of the Valley, and subsidence rates in some parts of the Valley have been measured to be nearly a foot per year.

“That affects infrastructure – homes, bridges and canals,” says Smith. “Canals crack or don’t work properly. California is also building high-speed rail through the Valley, so this information could help them plan.”

The potential for arsenic leaching is an indirect issue with subsidence, Smith says. As pumping lowers water levels in shallow aquifers used for irrigation, locals turn to deeper water for their drinking supply. Pumping from deeper, pressurized aquifers can cause arsenic-containing clay to compact and release contaminants into the aquifer, raising arsenic in drinking water to hazardous levels. Those aquifers contain water that is thousands of years old, and they are not quickly replenished, Smith says.

Smith and Majumdar are extending their method to estimate other hydrologic conditions, such as groundwater demand in high-use aquifers, including the High Plains Aquifer in Kansas, the Basin and Range Aquifers in Arizona and the Mississippi River Alluvial Aquifer in the southern U.S. The results could affect groundwater management around the world and in Missouri.

“The wet region of Southeast Missouri has high groundwater demand for crops,” Smith says. “Officials in the Mississippi alluvial plain could use what we’ve learned to plan ahead for groundwater needs. We want to work with the agriculture community for a win-win.”

Smith and Majumdar have written a paper about the research. Their findings are published in Water Resources Research, a publication of the American Geophysical Union (AGU).

Founded in 1870 as the University of Missouri School of Mines and Metallurgy, Missouri University of Science and Technology (Missouri S&T) is a STEM-focused research university of more than 8,000 students and part of the four-campus University of Missouri System. Located in Rolla, Missouri S&T offers 99 different degree programs in 40 areas of study, including engineering, the sciences, business and information technology, education, the humanities, and the liberal arts. Missouri S&T is known globally and is highly ranked for providing a high return on tuition investment, exceptional career opportunities for graduates, and an emphasis on applied, hands-on learning through student design teams and cooperative education and internship opportunities. For more information about Missouri S&T, visit mst.edu.