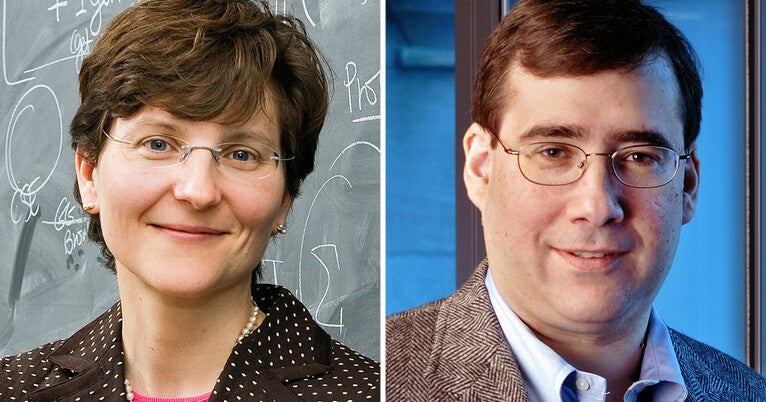 At the heart of almost any scientific or technological challenge, you’re likely to find a mathematician or two trying to work the problem.

This is the realm of applied mathematics. It covers a wide spectrum of research disciplines, from medicine and engineering to computer science and quantum physics.

Yale’s Department of Mathematics has a long tradition of applied math research that combines innovative theory and practical expertise — and the recent arrival of faculty members Anna C. Gilbert and John C. Schotland adds to that tradition.

“Anna’s work is in the interface between mathematics, data science, and computer science, and John is a mathematical physicist with a deep interest in imaging techniques that often have medical applications,” said Yair Minsky, the Einar Hille Professor and chair of mathematics. “Anna and John will enrich our department, both from the research perspective and in terms of our graduate and undergraduate programs.”

Gilbert, the John C. Malone Professor of Mathematics, has a dual appointment in the Department of Statistics & Data Science. She has degrees from the University of Chicago and Princeton, worked for seven years at AT&T Labs-Research, and spent 16 years on the faculty of the University of Michigan before rejoining Yale — where she spent a year as a postdoctoral fellow in the late 1990s.

“My mentor was [Phillips Professor of Mathematics] Raphy Coifman,” Gilbert said. “He has a unique way of looking at applied math, computation, data, and interactions with more traditional forms of mathematics. He had a big impact on how I think about aspects of the research I do.”

Gilbert studies various aspects of compression and sparse approximation — the notion of taking a complicated signal or data set and being able to represent it accurately with a much smaller amount of information. Conversely, she works on techniques for taking a compressed version of a dataset and converting it into an approximation of the larger, overall signal.

The work has a wide range of applications, from image compression to group testing for high-throughput biological screening.

“My work right now covers algorithms, geometry, and data,” she said. “Often, real world data are noisy. They’re missing values or are corrupted in some way and these corruptions distort the geometry of the data. You don’t get a very good picture of how the data are organized or related to one another. I’m working on algorithms to correct those pictures.”

A concept that comes up regularly in Gilbert’s work is “harmonic analysis.” It’s a way of viewing complex datasets as a combination of building blocks like small waves. Gilbert likened it to a written piece of music. “A musical score is a harmonic analysis of a piece of music,” she said. “It tells you what will happen if you play this note, at this time, for this long.”

As she continues to settle in and forge new research collaborations at Yale, Gilbert plans to expand her work with biological data. She’s also interested in doing more research on data involving how people make social decisions.

“I like to do beautiful mathematics and I like to make things work. At Yale I can do both,” she said.

Schotland comes from a family of scientists and academics, including his parents, their siblings, and his grandparents. “It was in the air when I was growing up,” he said of his interest in science and math. “As a kid, it was tremendously exciting. In a way, I didn’t choose science. It chose me.”

A key aspect of Schotland’s background, his medical training, has informed both his mathematics research and his awareness of how math and physics can be applied to medical challenges.

For instance, as a medical student, Schotland performed epilepsy surgeries in which a patient’s electroencephalogram (EEG) was measured on the surface of the brain as a way to localize seizures. It was a two-dimensional approach to gathering information on a three-dimensional problem. In the years since, Schotland has worked on developing mathematical tools to recover medical information that is inherently three dimensional.

“Medical training has helped me understand science in a broader context,” he said. “It motivates me to think of things I might not have otherwise.”

One of Schotland’s main research areas is quantum optics, which applies quantum mechanics to light — specifically, the “many body” problem of how intrinsically quantum states of light, such as entangled photons, interact with large collections of atoms. Schotland said Yale’s groundbreaking work in quantum science was a major factor in his desire to come to New Haven.

“Much of my previous work was about the propagation of light in highly scattered media such as milk, paint, or biological tissue,” he said. “All of that work was prefaced on the assumption that light behaves according to the laws of classical physics. But what happens if entangled pairs of photons travel through that same medium?”

Schotland said it is a line of study with implications for the transmission of quantum information and for improving the resolution of imaging devices.

Indeed, Schotland’s investigations of the relationship between light and matter have taken him into a variety of research areas, including partial differential equations, probability, and differential geometry. Some of that work has led to practical applications in optical imaging.

Minsky noted that Schotland is a leading innovator in combining optics with mathematical techniques to develop algorithms for improving biomedical imaging.

Schotland and Gilbert each stressed an eagerness to enhance their ongoing research and draw inspiration from their new colleagues.

“The people here are outstanding,” Gilbert said. “For some time, Yale has had an outsized impact on applied math. I’m thrilled to be a part of it.”