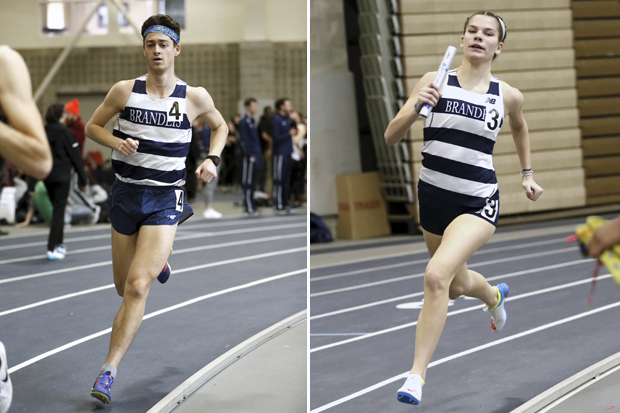 COVID-19 has eliminated competitive athletic events this fall, but not Judges student-athletes’ spirits.

To practice social distancing, the men’s and women’s cross country and track teams meet only three times a week in groups no larger than 10. Men’s team captain Josh Lombardo ’21 and women’s track and field team captain Devin Hiltunen ’22 say the modified schedule has taken some getting used to, but that they and their teammates are relieved to be with one another and practicing their sport.

“For me, it’s the love of the sport,” said Lombardo, a Health: Science, Society and Policy (HSSP) major from Westbrook, Maine. “There’s no competitive atmosphere right now — hopefully that comes back at some point — but just the camaraderie of going on runs and doing workouts with the team and coach makes this time seem more normal.”

Hiltunen, a member of the Brandeis team that won the distance medley relay national championship two years ago, misses competition training but likes the routine of practice. Both she and Lombardo have worked with head coach Sinead Evans to create a safe environment at practice. The duo has also created open office hours for private meetings and hosts virtual gatherings for the entire team.

“With practices limited to just 10 [in compliance with Brandeis health and safety guidelines], building the in-person connections is harder, so we’re doing Zoom calls for team building,” said Hiltunen, a biology and HSSP double major from Quincy, Massachusetts. “Sometimes we have dinner. We do trivia nights every week. It’s important, especially for the freshmen. I remember when I was a first-year the more experienced runners took me under their wing, and I want to do the same.”

Lombardo, who plans to continue running competitively after he graduates in May, doesn’t want COVID-19 to dampen the team’s competitive spirit.

“I think it’s important for me to be there in a leading role, as someone who was part of the program when things were more normal,” he said. “It can be as simple as showing everybody our running routes, but I want to communicate what it means to be a member of Brandeis Cross Country.”

Evans says the teams have shown plenty of spirit despite the uncertain times, and credited Brandeis for its handling of testing and campus safety.

“They’re happy to be back,” Evans said. “It’s challenging in that there’s nothing in the short term to train for, so it’s on us to get creative. We train in the summer — I had them do time trials on their own at home — but the fact that we can workout within 15 feet of one another I think helps them appreciate being together.”