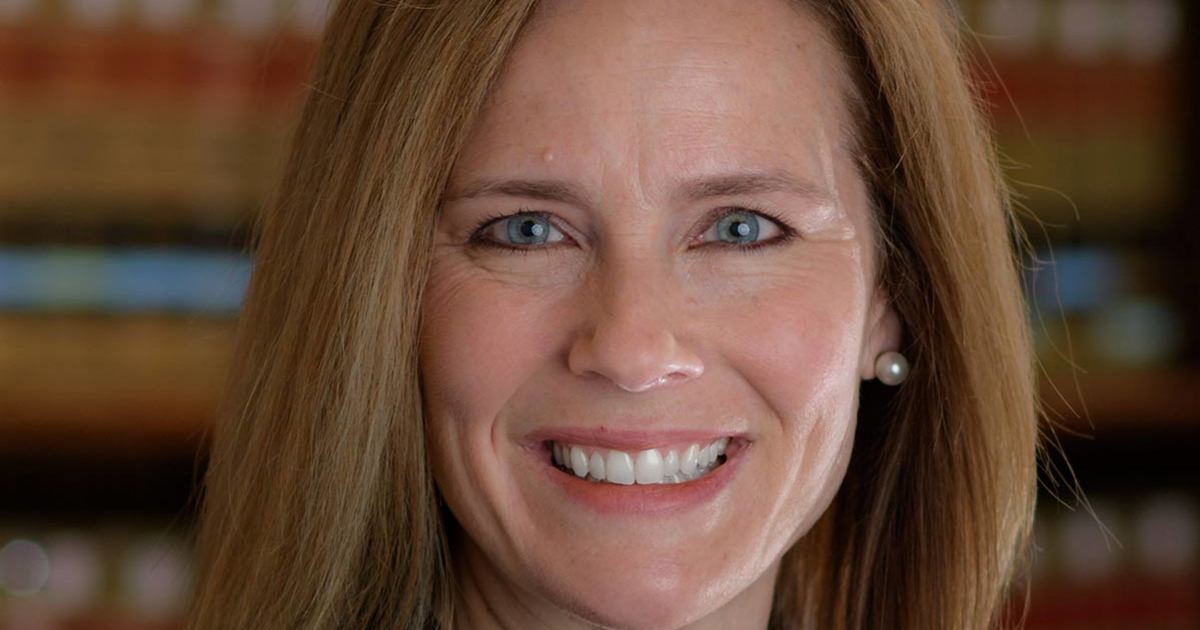 Judge Amy Coney Barrett, professor of law at the University of Notre Dame and a 1997 graduate of Notre Dame Law School, was nominated today to the Supreme Court of the United States to fill the vacancy created by the death of Associate Justice Ruth Bader Ginsburg. She is the first Notre Dame graduate and faculty member to be nominated to serve on the nation’s highest court.

“The same impressive intellect, character and temperament that made Judge Barrett a successful nominee for the U.S. Court of Appeals will serve her and the nation equally well as a Justice of the United States Supreme Court,” Notre Dame President Rev. John I. Jenkins, C.S.C., said. “An alumna and a faculty member of Notre Dame Law School, Judge Barrett has epitomized the University’s commitment to teaching, scholarship, justice and service to society. She is a person of the utmost integrity who, as a jurist, acts first and foremost in accord with the law. I join her colleagues in the Law School and across the campus in congratulating her on the nomination, and wish her and her family well through what has become, sadly, a personally bruising confirmation process.”

Marcus Cole, the Joseph A. Matson Dean of the Law School, added: “Judge Amy Coney Barrett is an absolutely brilliant legal scholar and jurist. She is also one of the most popular teachers we have ever had here at Notre Dame Law School. Judge Barrett is incredibly generous with her time and wisdom while mentoring her students.

“On a personal note, she is one of the most thoughtful, open-minded, considerate and kind people I have ever met. She lives a life of humility and grace, devoted to her family and community. Judge Barrett has served our nation with true distinction from the bench, and would continue to do so if she were confirmed to serve on our nation’s highest court.”

Barrett was confirmed as a judge on the U.S. Court of Appeals for the 7th Circuit in October 2017. A Notre Dame Law School graduate, she has served on its faculty since 2002.

Before joining the Notre Dame faculty, Barrett clerked for Associate Justice Antonin Scalia of the U.S. Supreme Court and for Judge Laurence H. Silberman of the U.S. Court of Appeals for the D.C. Circuit.

As an associate at Miller, Cassidy, Larroca & Lewin in Washington, D.C., she litigated constitutional, criminal and commercial cases in both trial and appellate courts. Barrett has served as a visiting associate professor and John M. Olin Fellow in Law at the George Washington University Law School and as a visiting associate professor of law at the University of Virginia. She is a member of the American Law Institute.

Barrett teaches and researches in the areas of federal courts, constitutional law and statutory interpretation. Her scholarship in these fields has been published in leading journals, including the Columbia, Virginia and Texas Law Reviews. From 2010 to 2016, she served by appointment of the U.S. chief justice on the federal Advisory Committee on Rules of Appellate Procedure. She has been selected as distinguished professor of the year by three of Notre Dame Law School’s graduating classes.