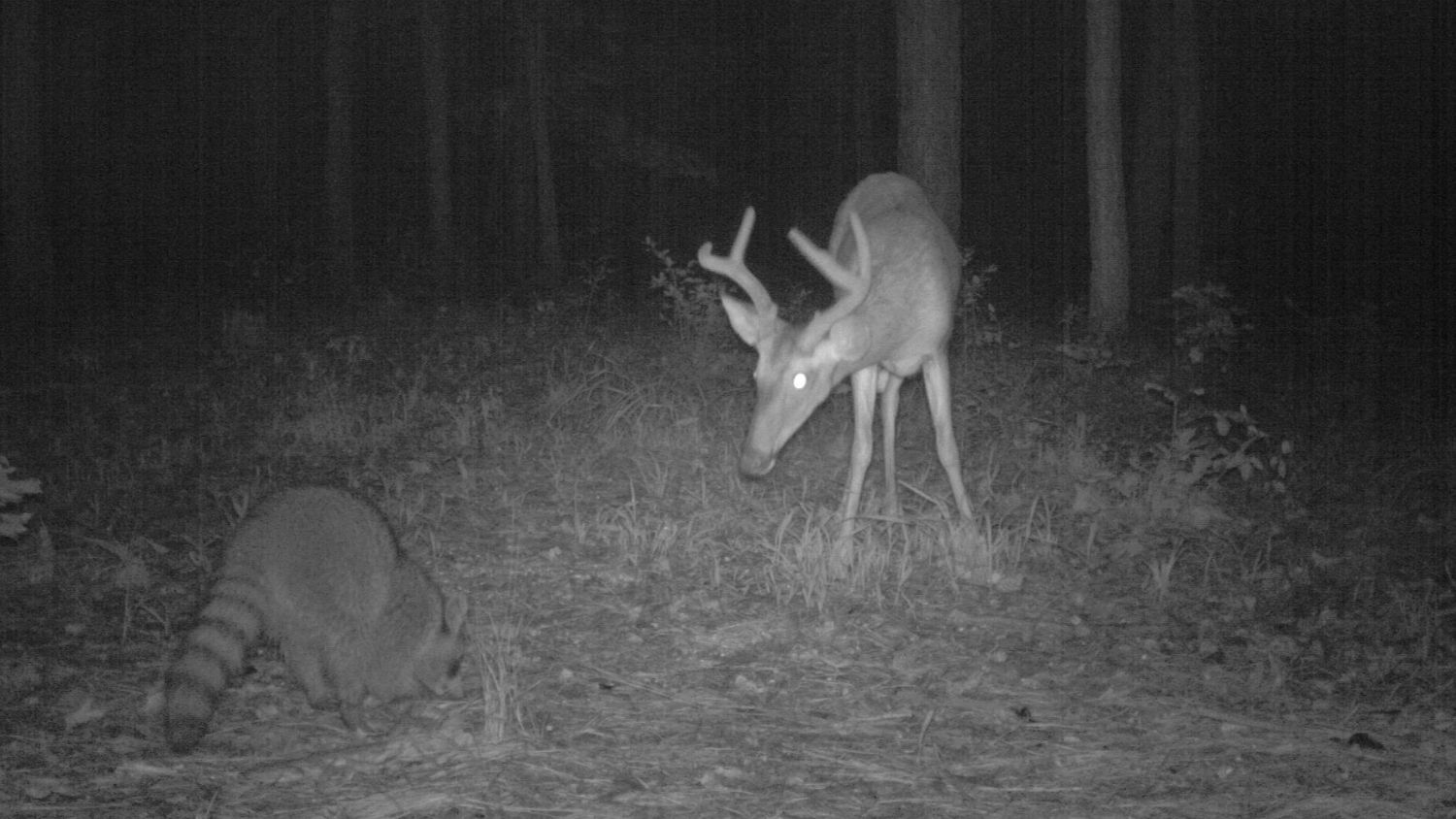 A new study in North Carolina caught raccoons on camera foraging with other animals including deer, foxes and flying squirrels and even coyotes. The raccoons’ lack of worry about the threat of predation supported researchers’ conclusion that raccoons are unlikely prey for coyotes.

“Raccoons do not seem to be vigilant toward coyotes when caught on camera, and their activity patterns overlap, all of which indicates that coyotes are not depredating raccoons, meaning they’re not eating them,” said Chris Moorman, professor and interim associate head of the North Carolina State University Department of Forestry and Environmental Resources.

The study, published in the journal Diversity, originally was designed to study deer and understand their relationship with coyotes, but lots of raccoons were captured on camera as well. The researchers used cameras, paired with bait, to study raccoon vigilance behavior.

When the raccoons had their head up in photos, the researchers interpreted that as raccoons being more vigilant. They saw raccoons were more vigilant during a full moon, and less vigilant, with their heads down and feeding, when they were foraging with other animals – even other species.

The Abstract spoke about the study with Moorman, who was co-author of the study with Chris DePerno, professor of fisheries, wildlife and conservation biology at NC State. It was led by Colter Chitwood, assistant professor at Oklahoma State University and a former student at NC State.

TA: Why were you interested in predation effects by coyotes?

Moorman: Coyotes are relatively new to the eastern United States. There’s a lot of debate whether we should be excited or maybe concerned about the coyote colonization. Some are concerned about coyote effects on prey like deer. On the other hand, others are excited about the potential role that coyotes might play by controlling some over-abundant prey populations.

If coyotes do control abundant populations of what are called “mesocarnivores” or “mesopredators,” which are medium-sized predators like raccoons, then they could be beneficial to species down the food chain – things that raccoons might suppress otherwise, like songbird populations, for example. If raccoons are eating a lot of songbird eggs, the addition of coyotes that eat raccoons would benefit the songbirds.

Historical evidence suggests a canid species was present in the eastern United States – some sort of wolf. And it could be that coyotes are filling the niche vacated when that wolf species went extinct. The theory is that historical wolf species ate raccoons, so modern-day raccoons may perceive a threat from coyotes.

TA: What did you find about raccoons in your study?

Moorman: We were able to look at the indirect effect of coyotes on raccoons in two ways.

The first was using pictures of raccoons from our cameras to see whether or not they were vigilant or non-vigilant.

The second way was to look at when the animals were active based on when they were captured in photos. If the activity patterns of raccoons and coyotes have a lot of overlap, then the two species presumably are coexisting without competition. But, if coyotes are a predator of raccoons, then raccoons should adjust their activity patterns so they don’t overlap with coyote activity.

The results of the activity pattern analysis showed a high degree of overlap. Coyotes were a little more active during the day than raccoons, but both species were most active at night and during dawn and dusk periods. Overall, raccoons were vigilant about 46 percent of the time. More than half of the time, they were not vigilant of predators and just feeding. There were a few cases where raccoons and coyotes were even captured in the same photo.

TA: What should we take away from this?

Moorman: The raccoons were somewhat vigilant, but not more than expected. That suggests in a population where coyotes were super abundant, raccoons were not feeling the stress of coyote predation. This backs up many studies that have shown few to no raccoon remains in coyote scat. From a theoretical standpoint, these results suggest that coyotes are not controlling raccoons and benefiting species further down the food chain.

We also learned about the other things that affect raccoon vigilance. One of those is that raccoons are more vigilant during the day and during a full moon, and those are times when there’s more light. So it could be that raccoons feel more exposed in more lit environments.

We also saw raccoon vigilance was greatest when they were by themselves in the photo. When there were other individual animals in the photo, they were less likely to be vigilant. That suggests they were using other species and other raccoons to reduce risk of predation. Some call it the “many eyes” effect. It’s shared vigilance.

TA: Has this method been used before?

Moorman: This idea of using camera traps to document vigilance behavior is a fairly novel, efficient and low-cost method to get at these kinds of questions. This approach can be used with a variety of species, including deer.