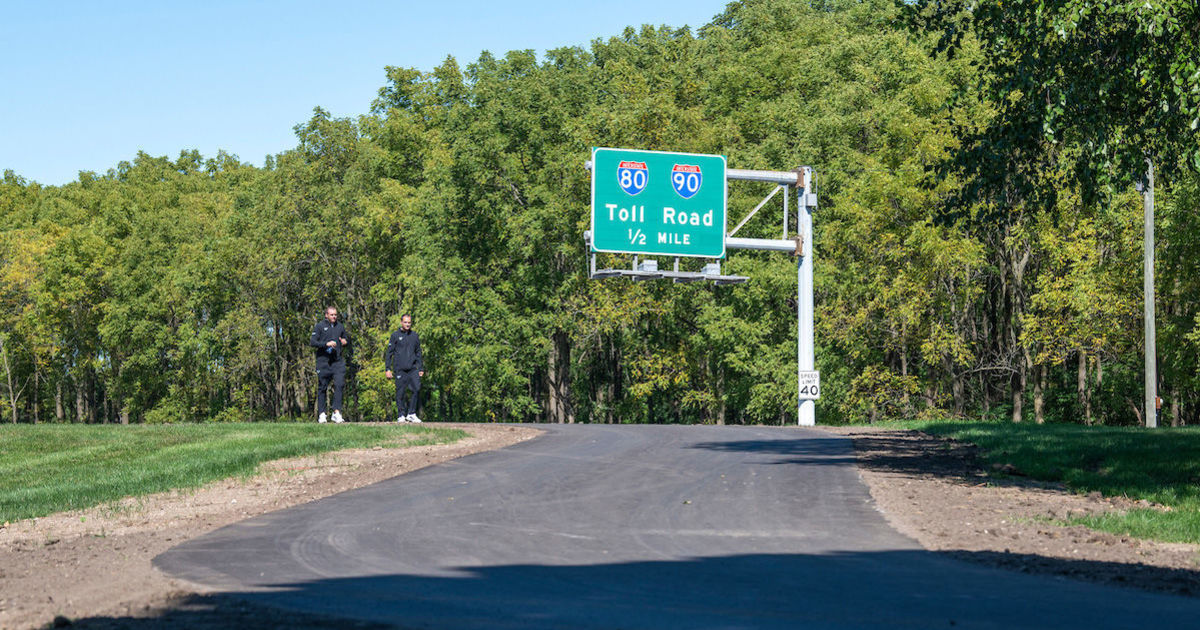 A new recreational pathway has opened on the west side of Indiana 933 between Angela Boulevard and Douglas Road, providing direct access to South Bend, Mishawaka, Niles and points in between and improving safety and mobility in the area in support of future development.

Located about 10 feet from 933 as it divides the University of Notre Dame from Holy Cross and Saint Mary’s Colleges, the mile-long asphalt pathway offers a safe alternative to the existing sidewalks on 933, which hug the curb and collect snow and ice in the winter from passing plow trucks.

A collaboration among Notre Dame, Saint Mary’s, Holy Cross, Holladay Properties and the religious orders of the Holy Cross brothers, sisters and priests, the 12-foot-wide pathway fills a longstanding gap in the Indiana-Michigan River Valley Trail, a multipurpose trail connecting Mishawaka, South Bend and Niles along the St. Joseph River and an abandoned railroad corridor in Indiana and Michigan.

Crews began staking the route for the new pathway over the summer. Grading and paving followed. It opened this month.

Financing for the project was courtesy of a nearly $900,000 Next Level Trails grant from the Indiana Department of Natural Resources, which paid for both design and construction. Notre Dame, Saint Mary’s, Holy Cross, Holladay and the three religious orders, under the banner of the 933 Corridor Improvement Association, will maintain the pathway. This includes landscaping and snow removal.

Paul Phair is a partner and senior vice president of Holladay Properties, which owns and operates the Inn at Saint Mary’s and the Hilton Garden Inn and Gillespie Conference Center at Douglas and 933, near the entrance to the Indiana Toll Road. The development is a joint venture with the Sisters of the Holy Cross.

“The ultimate goal is to improve this section of 933, to make it safer and to beautify it between Angela and Douglas,” said Phair, who is responsible for development activities for Holladay in South Bend.

Plans call for lighting along the new pathway, a landscaped median on 933 where a turn lane now exists and full removal of the existing sidewalk on the west side of the highway.

“Some measures to calm traffic and beautify the area will make it more enjoyable to spend time there and more welcoming to people entering the community there from the Indiana Toll Road,” Phair said.

A first step in that process, the new pathway runs north from the East Bank Trail near 933 and Angela to the LaSalle Trail near Douglas and 933, providing access to South Bend and Mishawaka to the south and the 933/U.S. 31 corridor and Niles to the north.

Taking advantage of an abandoned railroad corridor and trestle, the city of South Bend will soon extend the trail west as well, along Angela and across the river to Riverside Trail and Portage Avenue, then along Diamond Avenue to Lincoln Way West, near Holy Cross Church and School. This will improve access to the path. It will also create a 7.5-mile loop around the river between Angela and Darden Road and a nearly complete loop around Notre Dame.

Recreational trails offer many benefits. They create recreation and transportation opportunities for people of all ages and backgrounds, reducing automobile pollution and improving health, preserve green space and provide links between parks and other habitats, increase surrounding property values and influence business location and relocation decisions. They also improve quality of life and place in support of community and economic development.