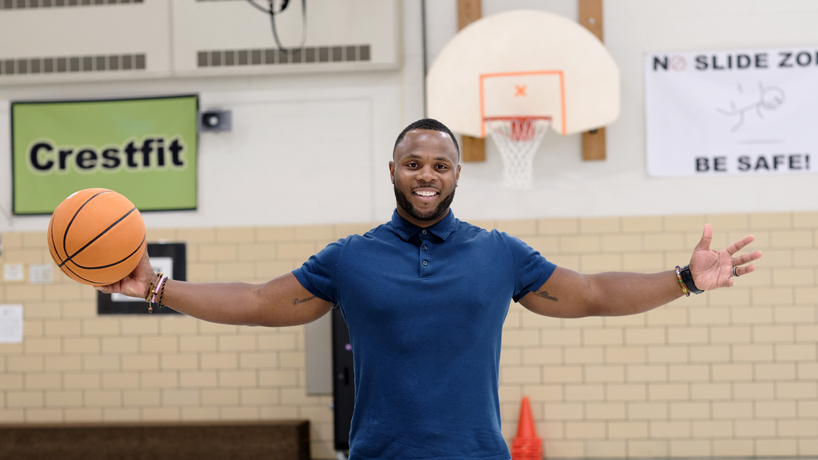 The Missouri Department of Elementary and Secondary Education named Darrion Cockrell the 2021 Missouri Teacher of the Year. Cockrell, a physical education teacher at Crestwood Elementary School, has forged strong bonds with students, staff and parents while overhauling the school’s fitness program. (Photo by August Jennewein)

For Darrion Cockrell, engagement is the key to reaching students.

Cockrell, Crestwood Elementary physical education teacher and 2013 University of Missouri–St. Louis education alumnus, incorporates his students’ interests into classes and goes above and beyond to make fitness fun for everyone.

“If you don’t have engagement, it’s hard to get whatever you’re trying to teach across,” he said. “What you have to do is try to make things more relatable to students. Try to incorporate stuff that they like and that they’re familiar with, so they have a better understanding. A lot of my students love music, so I make sure that music is one of the main things that we have in class.”

Through his positivity and dedication, Cockrell has built strong relationships at Crestwood, overhauled the school’s physical education program and been recognized as Missouri’s top educator.

That honor came this month when the Missouri Department of Elementary and Secondary Education named Cockrell the 2021 Missouri Teacher of the Year. He was selected by a committee of his peers from across the state.

“For me, it was crazy because I knew a lot of other educators going up for the same award,” Cockrell said. “I knew how amazing they were, and for me to win, it made me sit back and appreciate the work I’ve done.”

He added that it felt especially good to win the award as a physical education teacher.

Cockrell began teaching at Crestwood Elementary, part of Lindbergh Schools, in 2015 after spending a year at Lafayette High School. After coming to Crestwood, Cockrell implemented his “Crest-Fit” training program. He was inspired to rethink the school’s approach to fitness by former First Lady Michelle Obama and her initiatives to address childhood obesity.

“I wanted to make sure that I completely changed the culture and how students and their families see fitness and working out,” he said. “A lot of times there are misconceptions that working out is torture or it’s a punishment, but I wanted to make sure that I made it fun. So, I took the word Cross-Fit and mixed it with Crestwood and created Crest-Fit. It’s not just a word, it’s a culture and how we feel about fitness.”

The program started with his students, introducing fun things like music, dancing and super heroes to classes. Gradually, it grew, and Cockrell started offering Crest-Fit classes to parents and teachers after school hours. He also started the “Dads’ Club Open Gym,” a weekly event for local fathers to play basketball in the evening.

“I got a lot of support and good feedback from the teachers and the parents,” he added. “The fact that I have teachers participating with me and a lot of parents, it really helped me with the success of my class. Not only did I get the parents working out, but it helped me build community and relationships with families, which made it easier for them to communicate with me.”

The onset of the COVID-19 pandemic presented an interesting challenge for Cockrell, who is accustomed to working closely with students.

“As a P.E. teacher, I’m so used to having kids in the class with me and having access to all my equipment,” he explained. “Being in person, it’s easier to motivate a kid when I’m in front of them.”

Initially, he was only responsible for curating fitness resources for his students and putting them into a shared document. However, he felt that he needed to do more.

“I knew if I was not present, the students would not give an 100 percent effort,” Cockrell said.

Cockrell started joining other classes on Zoom throughout the school day to check in with his students. He also started creating “Motivational Monday” videos for students and their families and broadcasting Facebook Live videos.

“A lot of my kids were engaged, I think because they knew that other friends and family were watching those videos,” Cockrell said. “That made them want to do it more. I got a lot more engagement when we first started COVID than I ever would have thought.”

Resilience in the face of the pandemic is informed by Cockrell’s larger philosophy. He believes that challenges and setbacks shouldn’t discourage anyone from looking at the big picture and moving forward. It’s something with which he’s familiar.

Cockrell has been an athlete most of his life, and his skills led to a spot on Millikin University’s football team. Unfortunately, a serious shoulder injury ended his career after two years. It was too difficult for him to remain at Millikin if he couldn’t play football, so he returned home to the St. Louis area.

He knew UMSL had an excellent education program, and his background as an athlete made the transition to studying physical education easy. His professors’ investment in their students is one of the things he remembers and appreciates most about his time as a Triton.

“The education program was top-notch,” Cockrell said. “I couldn’t have asked for a better professor than Dr. Thomas Loughrey. He pushed me so much. People like Carol Weber, Sherry Parker, those professors are just the best, and I think what I liked most is that they were super personal.

“They actually went out of their way to show you that they care, they support you. They want to make sure that you achieve whatever you’re trying to do with your schooling. They just had your back.”

That’s a lesson Cockrell has gone on to apply to his own students.

“As an educator, it’s super important that you understand the difference in all your kids,” he said. “Whether it be race, background, each kid is different. I think when I was growing up a lot of people said, ‘Oh, I don’t see difference. There’s no difference. I don’t see color.’ But it’s important that you understand the difference in kids because kids learn differently. They see things differently. Once you have a better understanding of how they see things and how they understand things, it’s only going to allow you to be a better teacher and do the things that work best from them so they can be more successful.”