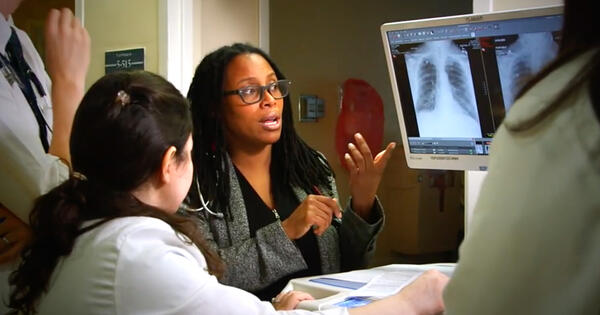 Being a physician is already extremely time-consuming and takes a lot of training. How did you start adding equity in healthcare as a focus?

Yes, the clinical training on the route to becoming a physician is a real commitment—it’s intense; it is emotionally, psychologically taxing and draining. But along that journey, I don’t know how I could have not become interested in equity, because you’re witness to inequities every day, starting in medical school.

We didn’t even really have the language back when I was a medical student. There wasn’t the disparity language, we didn’t have social determinative health language, we didn’t have equity language or health justice language. But I was president of our Student National Medical Association, which is the student arm of the National Medical Association, which was founded essentially because physicians of African descent in the United States were excluded from organized professional societies, and basically were excluded then from getting privileges and licenses to practice in hospitals. That was one of the structural tools used to segregate healthcare.

So even though it wasn’t explicit, the fact that the SNMA existed spoke to the legacy of discrimination and bias in our healthcare system. As a physician, I identify as somebody of African descent, understanding that I was trying to make my way in a system that had resisted, for so long, my presence. And understanding as well what it meant to be a patient of color moving through that same system that had, for a long time, resisted their presence.

“The role and influence of race within the healthcare system was, to me, through my lived experience, dominant and overwhelming, and was a lens through which to understand clinical medicine.”

I was compelled to think about healthcare inequity as a trainee, as someone not in a power position. If a patient of color saw me enter the room, 9.9 times out of 10, there would be a comment made before their discharge about how reassuring it was for them to have somebody of color on their care team. And a lot of the time, if it was a patient not of color, they would make lots of assumptions about my role. To this day, as an attending physician at Yale, patients are constantly handing me their trays and asking me if I can call their doctor. And I’m their attending physician of record, and we have met several times.

What was the point when you took on health equity in a more formal way?

In medical school, I had an opportunity through SNMA and some key faculty to understand a little bit more about what it meant to be a person of color in this profession. And during my residency, which was extremely eye-opening, I trained at Brigham and Women’s Hospital.  I think part of our hidden curriculum as residents was our duty to think about ways to improve health and outcomes for populations and communities, in addition to taking care of that individual patient in front of us.

I had just incredible mentors at the Brigham. I had Dr. JudyAnn Bigby, who was my official program advisor when I was a resident. She later went on to become the secretary of health and human services for the State of Massachusetts. She was a role model as a health equity researcher, advocate, policymaker. Paul Farmer was one of my attendings at the Brigham; he is someone who has made incredible imprints across the globe in terms of thinking about global health and global health equity. I was surrounded by people who were really motivated by that shared value of equity, so I started thinking about it a lot. That’s when I said, “I need more training in this.”

My big sib in the program was Sonia Angell, who is now health commissioner for the State of California. She was heading off to do the Robert Wood Johnson Foundation Clinical Scholars Program, a two-year program for physicians giving you a skill set to become healthcare leaders. Sonia said, “You should consider this program.” I looked at the program and I came and interviewed at the Yale site and I was fortunate enough to be accepted.

The fellowship was amazing. Harlan Krumholz and Betsy Bradley were the co-directors at the time. Howard Forman, who I now work with on the Pozen-Commonwealth Fund Fellowship, was one of my faculty members. Everything I learned about policy, I learned from Howie.

There was just amazing faculty talent in the Clinical Scholars Program. And that gave me the tool kit. I knew already that I was on a path to thinking about health equity, and that’s what I wanted to focus on. And the fellowship program at Yale gave me that opportunity to build out that armamentarium.

When you are deciding whether to take something on, what are the values that you apply to say, “This is worth my time”?

I give advice to junior faculty members all the time about how you approach this. You have to answer the questions, Why you? and Why now? And the answer needs to be, “Because there would be nobody else, and because the door will close if you don’t do it.” That’s the advice I try to take. Does it have to be me, essentially? Is there anybody else who can do this, who might be better suited to do this, quite frankly, than I am? Is it an opportunity for me to give a chance to someone else and try to continue to pay forward the sponsorship and mentoring that I received?

And then, Does it have to be today? Is this something that, if I say no to today, it’s going to circle back? Or is this just once?

My inclination is to say yes. The work I do, it can sometimes feel desperate. Reporters will often say, “Oh, that’s such a downer.” But to me, there’s optimism, there’s hope, there’s opportunity in the challenge, and I find the work just deeply joy making. So I do try to say yes, and probably say yes more often than I should.

How does the Pozen-Commonwealth Fund Fellowship fit into your long-term personal project?

What so many of us enjoy about the work that we do is the opportunity for creativity. The inception of something, either a program or a research project, is this chance to just invent and imagine.

I remember very clearly that Howie and I were at the graduation ceremony for the Clinical Scholars Program, which is now the National Clinician Scholars Program, and Howie said, “What would you think about us working on a proposal together for the Commonwealth Fund for a fellowship focused on health equity?” That’s the stuff that gets you really excited.

It’s been a real team effort with everyone at SOM to bring that program into being. This program is a tangible recognition that we all need to be focused on health equity; this isn’t a concept that is siloed to, let’s say a school of public health or a school of medicine. We need the skill set from across all these different professional graduate schools to really begin to make that progress that I think we can make to achieve health equity.

I also teach a class on population health and health equity, along with Brad Richards as my co-instructor, which is offered to the second-years in the healthcare track for the EMBA program. I think it’s pretty unique at a business school anywhere to say, “Not only are we going to support a fellowship program that has the explicit mission of creating leaders in the healthcare equity space, but also that we see the value in having a curricular component that makes sure all of our healthcare students have an opportunity to learn more about disparities and about what they can do to promote equity.”

Has everything that has happened in 2020 had an effect on your thinking about these issues and how to tackle them?

It seems like there’s an awakening around this question of disparities, particularly when it comes to race and ethnicity. I have an appreciation for the curiosity that I’m experiencing from people who are eager and hungry to learn more. I like now being able to get up in front of audiences and not having to justify my existence, which is what it can often feel like.

It’s always going to be pushing a boulder uphill. That’s what it means to be in this business of healthcare equity, where we have to face hard questions about resource distribution. But the boulder is just a little bit lighter. If I have 45 minutes, maybe I don’t have to spend the entire time trying to explain that disparities are real. Is this moment the opportunity to start conversations with how can we get to solutions? And where are those solutions and how can we find them?

We have an amazing network of health equity researchers across the country. I think everyone is holding their breath a little bit to see how much progress we can make at this particular moment in time so that we don’t return to how things were.

When you talk to people, what do you tell them are the very top-line things that we should be doing to make a dent?

We need equitable access to high-quality healthcare. And every word in that sentence matters.

We need a lot outside of the healthcare sector. It’s about all the structural realities that play into the realization of inequity more broadly. The disproportionate representation of brown and Black people in those low-wage, frontline jobs that were deemed essential during the pandemic—that’s a structural reality. To get to a place of equitable health outcomes, we have to have hard conversations about access to opportunity. That’s what we really need. We have a segregated, separate and not equal, educational system in this country.

When we talk about pre-existing conditions and COVID, there’s one narrative that says, “Oh, you have folks who are making bad choices with their diet and they’re not exercising,” but there’s never a mention of the fact that they’re living in neighborhoods exposed to environmental toxins. We don’t speak to this. We don’t speak to the fact that people live, not just in food deserts, but often in food swamps. I went blueberry picking yesterday. My kids have lots of fresh produce to eat. What does it mean to live somewhere where it takes you three buses and a train to get to somewhere that sells skim milk, or a fresh leafy green?

We have to step outside of healthcare if we’re serious. People always are shocked when I give this statistic, but we know that only about 20% of the variance in health outcomes we see is due to clinical care. So, as a physician, even though “equitable access to high-quality healthcare” is my tattoo, I still have to say that, at the end of the day, more than 70% of the variance is due to socioeconomic factors, to some of these behavioral factors that aren’t really choice-based at all. If you don’t have a grocery store, you don’t have choice.