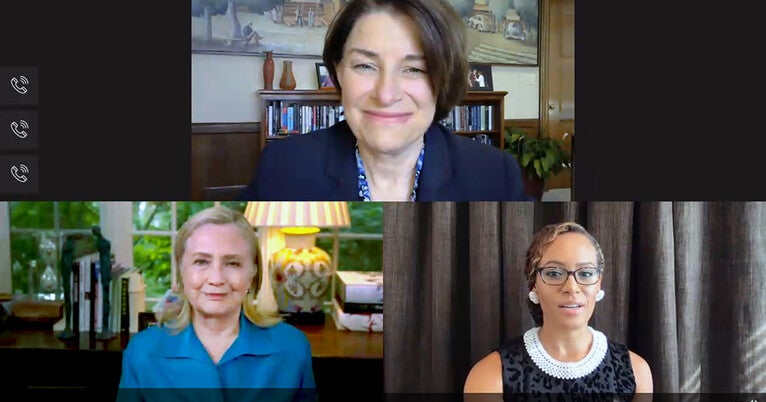 Hillary Clinton ’73 J.D. had been accepted to both Harvard and Yale Law Schools and was deciding where to go when she was introduced to a Harvard professor at a cocktail party. “He said, ‘we don’t have a nearest competitor, and we don’t need any more women,’” Clinton, the former secretary of state, recalled during a virtual Yale event last week.

“Yale had welcomed women in their professional and graduate school programs,” she said. “Even though the percentage was small — less than 10% — we were a tightknit group.”

“We lived through a tumultuous time and we organized ourselves,” she said. “Someone set the law library on fire and we formed a bucket brigade.”

Clinton’s remarks came as the nation faces another tumultuous time, during an event marking the culmination of the 50WomenAtYale150 initiative, which commemorates 50 years of coeducation at Yale College and 150 years of women at Yale. She was joined by U.S. Senator Amy Klobuchar ’82 B.A. for a discussion that touched on, among other topics, what it’s like to run for president of the United States — and the obstacles facing women in politics. The talk was moderated by Assistant Dean Risë Nelson, director of the Afro-American Cultural Center at Yale.

Clinton said she initially resisted what would become three of her campaigns for public office — first, her successful run for the U.S. Senate, in 2000, and then her two bids for the presidency — “in part, because of the problems that confront women in politics.”

“A few women had tried, but none had won a primary or caucus,” she said.

But, Clinton added, she was called to serve, and now she’s excited by the influx of women into politics and making their own presidential runs. And despite the current political divisions and social unrest, she sees in young people a determination and a willingness to challenge inequality, she said. It has inspired her. “Young people are responding to tragedies, they are in the streets, peacefully protesting.”

Klobuchar, who became Minnesota’s first female U.S. senator in 2006 and pursued the Democratic nomination in the current election cycle, credited Clinton for breaking the glass ceiling for her and other women who decided to run for the White House this time around. “We doubled the number of women who had ever been on a debate stage in a Democratic primary,” Klobuchar said.

Asked by Nelson how they maintain hope in such trying times, Klobuchar answered: “Ruth Bader Ginsburg never gave up … the message is: you do not give up.”

Answered Clinton: “Archbishop Desmond Tutu said, ‘I am a prisoner of hope.’ I am very hopeful despite the obstacles and setbacks and the clear and present danger this president poses. We’re going to see an outpouring in this election. Voting is an act of hope, but it is a very practical one as well.”