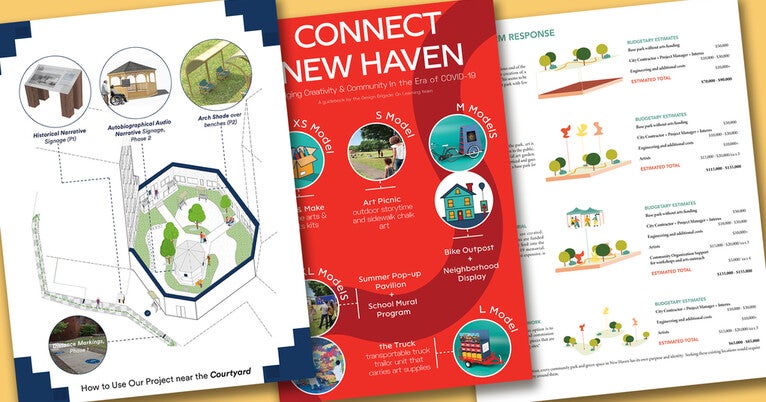 Each summer, New Haven-based architect Ming Thompson ’04 B.A. looks forward to working with a fresh crop of Yale interns. But by early spring, it was clear that the typical internships wouldn’t happen this year.

Still, Thompson realized that the public health crisis, and the physical distancing measures it necessitated, had created unique design challenges in the local community that talented students could help tackle. It sparked an idea.

“I figured that we could connect the two — we could put Yale students in touch with local clients facing COVID-related design problems,” said Thompson, a co-founder of Atelier Cho Thompson (ACT), an architecture firm with offices in New Haven and San Francisco. “Together, they could work to find solutions.”

She contacted Dana Karwas, a friend and the director of Yale’s Center for Collaborative Arts and Media (CCAM) — an interdisciplinary research facility that blends traditional arts with computer science and technology — to propose a design-focused, summer-internship program geared for the COVID-19 era.

I liked the idea of creating something immediate that could [help] students… address real-world design solutions, and also serve our neighbors.

“I liked the idea of creating something immediate that could serve students who were losing internship opportunities to the pandemic, address real-world design solutions, and also serve our neighbors in New Haven,” said Karwas, a critic at the Yale School of Architecture.

In a short time, the CCAM and ACT launched Design Brigade, a 10-week program that gave 21 undergraduate, graduate, and professional students the opportunity to work with city clients and professional mentors to solve pandemic-related spatial challenges.

By early April, they received 85 applications for the first 15 slots. (Six School of Architecture students joined about midway through the program.)

The students were divided into three interdisciplinary teams. Each was assigned projects with local clients. One, “On Memory,” involved working with the City of New Haven to design a memorial — either physical or digital — to commemorate the pandemic’s impact on city residents. Another, “On Family,” linked students with The Towers at Tower Lane, a managed-residential community located downtown, where they tried to find ways to keep residents from feeling isolated while separated from friends and family. The third project, “On Learning,” partnered students with local cultural institutions to reimagine programming and community outreach during and after the pandemic.

In approaching their tasks, they solicited input from the community and used it to shape their proposals, Thompson said. “They learned a lesson that isn’t often taught in architecture school: a designer’s first job is to listen,” she said. “They spent a lot of time asking questions, conducting surveys, and speaking to dozens and dozens of people. Before reaching any conclusions or putting pen to paper, they listened to what people had to say.”

Karwas and Thompson gave the students access to a network of more than 30 mentors, including architects, artists, writers, and leaders of nonprofit organizations, who helped guide them and offered feedback. The mentors included Yale alumni and faculty as well as professionals working in New York City and cities across the country.

“We felt it was important to replicate the kind of professional network the students would develop if this was a typical summer internship,” Karwas said. “The mentors made a difference. They were crucial to the program’s success.”

The projects were complicated by the fact that the teams couldn’t meet in person. The students relied on Zoom, cloud applications, and social media to share work, swap ideas, and meet with their mentors and clients.

“Our team worked seamlessly together,” said Kayley Estoesta, a senior majoring in urban studies and member of the “On Memory” team. “Our daily Zoom meetings provided enough digital face-to-face time to share ideas, come to consensus on designs, and make sure next steps were all clear.”

The students documented their experiences over the 10 weeks on Medium, an online publishing platform.

By the program’s end, each team had presented to their respective clients a product that addressed the designated problem and set a path toward resolving it.

‘Community as a Framework for Design’: Design Brigade students share their work and discuss the program’s outcomes

The “On Memory” team adjusted the scope of their project to reflect the protests against racial injustice that gripped New Haven and cities across the U.S. following the killings of George Floyd and Breonna Taylor by police officers. Their project emerged amid a debate over how the country should remember its past, and over which historical figures should be venerated and which should not.

In the end, the students proposed an art park — centered on the ideas of urban healing and the importance of green space — that would be guided by a community-based advisory board.

They presented their plan to New Haven Mayor Justin Elicker ’10 M.E.M./M.B.A. via Zoom and provided the city a guidebook for moving forward.

“Working with the students was an incredible experience,” said Adriane Jefferson, the city’s director of cultural affairs. “Their energy, professionalism, and talent made for a great working relationship. I was impressed with their openness to feedback and modifications.”

The “On Family” team focused on revamping The Towers’ outdoor space, including an interior courtyard, to help residents exercise and socialize safely. They proposed a narrative walking tour of the facility’s campus, including the addition of kiosks where residents could learn about the history of the site, which once housed a trolley depot. They further proposed a narrative element that would allow residents to share their personal stories through recordings and reflect with each other on their experiences.

The students provided a guidebook for executing their proposals.

“They met their deadlines and delivered a great product,” said Jesse Wescott, the facility’s director of operations. “My goal is to make it happen. I’d love for the students to come back to campus and walk the path they designed and watch our residents enjoy it safely. I want them to be able to say they built something that made a difference.”

The “On Learning” team faced the challenge of working with multiple clients: the Yale University Art Gallery, the Yale Center for British Art, the Beinecke Rare Book and Manuscript Library, and NXTHVN — an arts incubator in the city’s Dixwell neighborhood that supports emerging artists and curators of color.

The team produced an extensive guidebook to help these and other local cultural institutions implement accessible and high-quality arts programing aimed at the city’s young people. It provides models for putting on community-based, physically distant, and in-person events, including arts and crafts sessions, arts picnics, and large-scale mural-making programs.

“The students took our notes well, expanding our conversation into one that took into account community relations here in Dixwell and between NXTHVN and Yale,” said Terrence Washington, NXTHVN’s program director.

As the program neared its end in August, many students offered reflections on the experience on their Medium channel.

The Design Brigade has been one of the most consequential and enlightening projects I have ever worked on.

“The Design Brigade has been one of the most consequential and enlightening projects I have ever worked on,” wrote Robbie Skoronski, a senior architecture major and member of the “On Learning” team.

He particularly appreciated the real-world experience of working with clients who have skin in the game. “As this project has developed over the past 10 weeks, I have been astounded by the radical unimportance of what many would consider traditional ‘design’ when faced with the multifaceted problems of real people, organizations, and communities,” he wrote.

Skoronski appreciated the chance to work with graduate and professional students.

“Our team consisted of one other undergraduate who I knew before the project, a music school student, three architecture students, and a graphic design student,” he wrote in an email. “I found the interdisciplinary approach to the project to be instrumental to the project’s success. Although the majority of us were from an architecture and design background, the team members from other disciplines brought new perspectives to the project we had not previously considered.”

“One of the people we were working with said this is what ‘good’ looks like: a partnership between the community, the university, and the city,” she said. “It was a real dream to hear that. The city is in a tense time right now. All of us are experiencing uncertainty and anxiety about the future.

“It was great to be part of something positive. It wasn’t easy and it showed the students that good design work is challenging,” she added. “As someone who was once part of Yale and is now part of New Haven, it was great to see people who really care about the city coming from a variety of perspectives getting together to solve problems.”