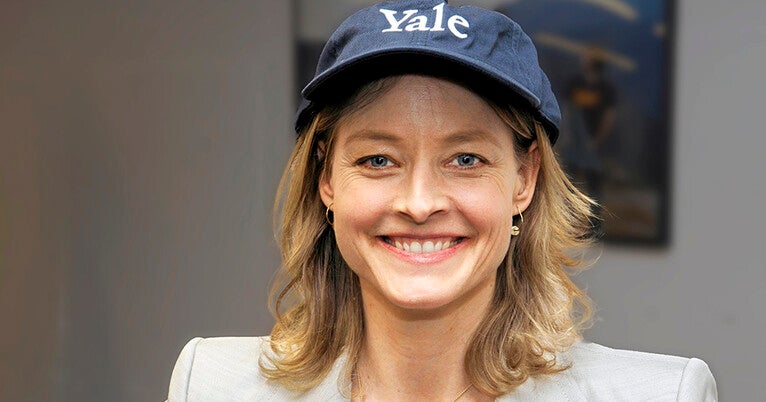 When Jodie Foster ’84 B.A. first arrived on the Yale campus as an undergraduate student in 1980 —“on a warm August day in dolphin shorts” — she hoped that no one would notice she didn’t belong.

“I wasn’t smart enough, deep enough, or preppy enough to belong,” she said. In other words, she said, she suffered from “imposter syndrome,” the internalized fear of being outed as a fraud. But, added Foster, “in this imposter’s case, it became a motivating factor.”

Foster, the critically acclaimed, multiple Academy Award-winning actress — whose films include “The Accused,” “Silence of the Lambs,” “Taxi Driver,” and “Panic Room,” among many others — on Sept. 24 opened a three-day virtual event marking the culmination of the 50WomenAtYale150 initiative, a year-long celebration of 50 years of coeducation in Yale College and 150 years of women at Yale. Details here.

Foster called on Yale students and alumnae to “claim ownership of your education” rather than just receive it. “When you challenge your institution, it becomes alive,” she said.

It was that radical spirit to not only be part of Yale but to shape a new, more inclusive Yale, that guided the university’s first women students, she noted, first in the graduate schools, and then at Yale College. “This was the beginning of a new era,” she said. “Let it be known that this place will grow and change.” These trailblazing early women, said Foster, “listened to the call of longing for purpose and the beautiful call of belonging.”