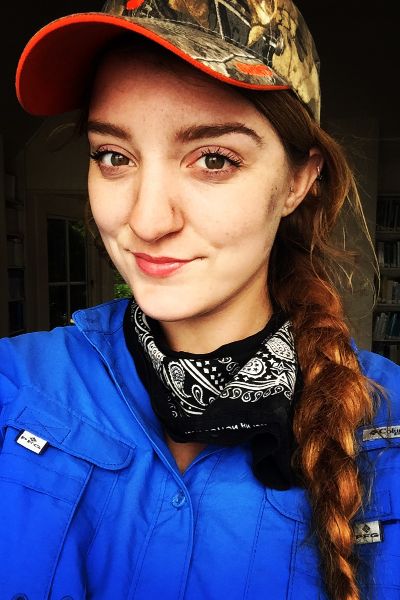 Georgie DeAntoni knelt in the ashes of what had once been a home on Jamison Road in Boulder Creek.

The day was hot and the 26-year-old fifth-year UC Santa Cruz anthropology Ph.D. candidate sweltered in her Tyvek suit and mask. Using a small hand trowel, she sifted through the gray rubble as part of a team of volunteers sent out by the Alta Heritage Foundation of Santa Rosa that included several archaeologists plus five specially trained dogs and their handlers.

The team was looking for the cremated remains of Sue and Mike Fortwengler, which had inadvertently been left behind when their daughter, Heidi McFarland, and her family fled the fast-moving CZU Lightning Complex fire.

It was a little like searching for a needle in a haystack. The couple’s ashes had been in two urns on top of an armoire but now were mixed with the fire-charred remains of a home: drywall, wood, books, furniture.

But DeAntoni, who is doing archaeological research at a Native Californian site in San Juan Bautista for her dissertation, was especially suited for the task.

“Archaeologists are weirdly trained to do this kind of thing,” DeAntoni said in a telephone interview from her Burlingame home. They are taught to look for micro-changes in the soil as they painstakingly peel back layers of dirt to help identify things like a wall, a trash pit, a cooking area. In a fire, cremated remains will look different than other burned substances. They are grittier with bits of bone and teeth mixed in. Often, depending on what burned with them, they will also turn a different color than the ash around them—pinkish salmon, brown, and sometimes even a golden hue—which helps a trained eye to spot them.

For DeAntoni, it was a way to be of service.

“One of the nice things about our program,” said Tsim Schneider, assistant professor of anthropology at UC Santa Cruz, “is that we all share a common ground in terms of an interest in students getting a practical training in their work. In my own teaching I also try to instill this idea of public-facing archeology. The idea that we don’t just do research for research’s sake but we actually do good outside of our laboratory and field settings.”

McFarland didn’t realize she’d forgotten her parents’ ashes until days after she and her family had fled.

Her father and mother had died one year apart in 2015 and 2016, respectively. Her dad, Mike, was a cancer survivor and was named an American Red Cross Hero for his volunteer work with cancer patients. And, even though he and McFarland’s mother Sue had divorced, when she was diagnosed with early-onset Alzheimer’s at the age of 50, he moved back in and became her caregiver for more than a decade, McFarland said. Her mother called him her “was-band.”

McFarland couldn’t stand the idea that her parents’ ashes would be scooped up and tossed in a toxic-waste dump with the rest of the ruined house.

That’s often the story, according to Lynne Engelbert, a dog trainer and long-time member of the Institute for Canine Forensics, which works with the nonprofit Alta Heritage Foundation. She and her dogs, she said, have searched for remains at the World Trade Center, the Oklahoma City bombing site, and as part of the Columbia Space Shuttle recovery mission. She also has searched for dozens of lost cremains in the Camp, Woolsey, Carr, and Tubbs fires.

Already, dozens of requests have poured into the Alta Heritage Foundation from homeowners who lost their loved ones’ cremains in the fires that ravaged Oregon and California, Engelbert said. The majority of expenses are covered by the volunteers themselves. The service itself is free.

“In so many cases, people are literally running for their lives,” said Engelbert from her Saratoga home office. They may have only 15 or 20 minutes to leave, and grabbing the cremated remains of their husband or wife or parents or child is not usually the first thing on their minds. Later, however, sadness and guilt start to seep in.

“The thought that their loved ones’ cremains might wind up in a toxic waste dump is devastating,” she said. “They say: ‘I can’t bear to have Dad end up in a dump.’”

The work is straightforward but painstaking and sometimes dangerous. Trainers—there were five dogs on site during the recent searches of three ruined homes in the Santa Cruz Mountains—are given an approximate location of the lost cremains. After a safety assessment looking for anything that might harm the dogs, a canine is sent into the search area.

Trained to sniff out human bone, the canines will sit or lie down when an area of cremated remains is found, said Engelbert.

“Our dogs love what they do,” Engelbert said. “They get out there and are given rewards when they find things: a treat or a tug or a ball. Whatever they love, you give it to them. My dog (a 10-year-old black-and-white border collie named Piper) will kill for a rolled-up towel.”

Volunteer archaeologists like DeAntoni and recent UC Santa Cruz anthropology grad Adriano Odello (Cowell ’20) and others then begin their search in the area the dogs pinpointed. It took an hour before DeAntoni and the other archeologists were able to locate the cremains of both Sue and Mike at McFarland’s ruined home. However, the fall from the top of the armoire had mingled the two sets of ashes with no way to separate them—a fact McFarland said her parents wouldn’t have minded.

“It’s very significant to be able to know I can put my mother’s ashes at rest in a place where she wanted instead of being scooped up and taken to some hazardous waste dump,” McFarland said. “To me, it was a huge blessing to have that peace of mind.”

As for DeAntoni, she’d like to volunteer for the program again.

“This is one of the ways archeology can be of service,” DeAntoni said. “It’s a science that’s interesting but it doesn’t always help people. I felt this is a place where we are trained to do something that benefits our community.”

“Why do I do it?” Engelbert said in response to a question. “I tell people I do it because I’m selfish. I love it when I can help someone who needs it the most …. If you can help a family bring some type of closure to (something like a fire or terrorist attack), there is no greater feeling, and that’s why I do it.”

Visit the Alta Heritage Foundation website for more information or to donate, volunteer, or request services.