A junior majoring in political science and minoring in Spanish, Alexis is a seriously involved Illini. A member of Kappa Alpha Pi, a pre-law fraternity, and one of the founders of Pointe Shoe Lab, the only ballet-centered RSO on campus, she also now serves as the Student Body President for Illinois Student Government. We sat down with her to learn about her election experience, what makes ISG so important, and her journey through college as a first-generation student.

“Ever since I was little, I knew that I had college in my mind. During high school, you kind of decide ‘Where do I want to go?’ and … I knew exactly that this is where I wanted to come. I didn’t apply to many different schools. I applied to like, three schools, just hoping that U of I would be the one I got into, and I did!”

What are your favorite aspects of UIUC?

“What I really like is that there’s a place for everybody here on campus. I know in high school, for my own experience, you can never find your place, even if it’s a big high school. So, this really big and large university has helped me find a community of people, my lifelong friends … and it’s helped me meet a lot of different people from various different backgrounds, which I don’t think I would have ever met if I didn’t come here.” 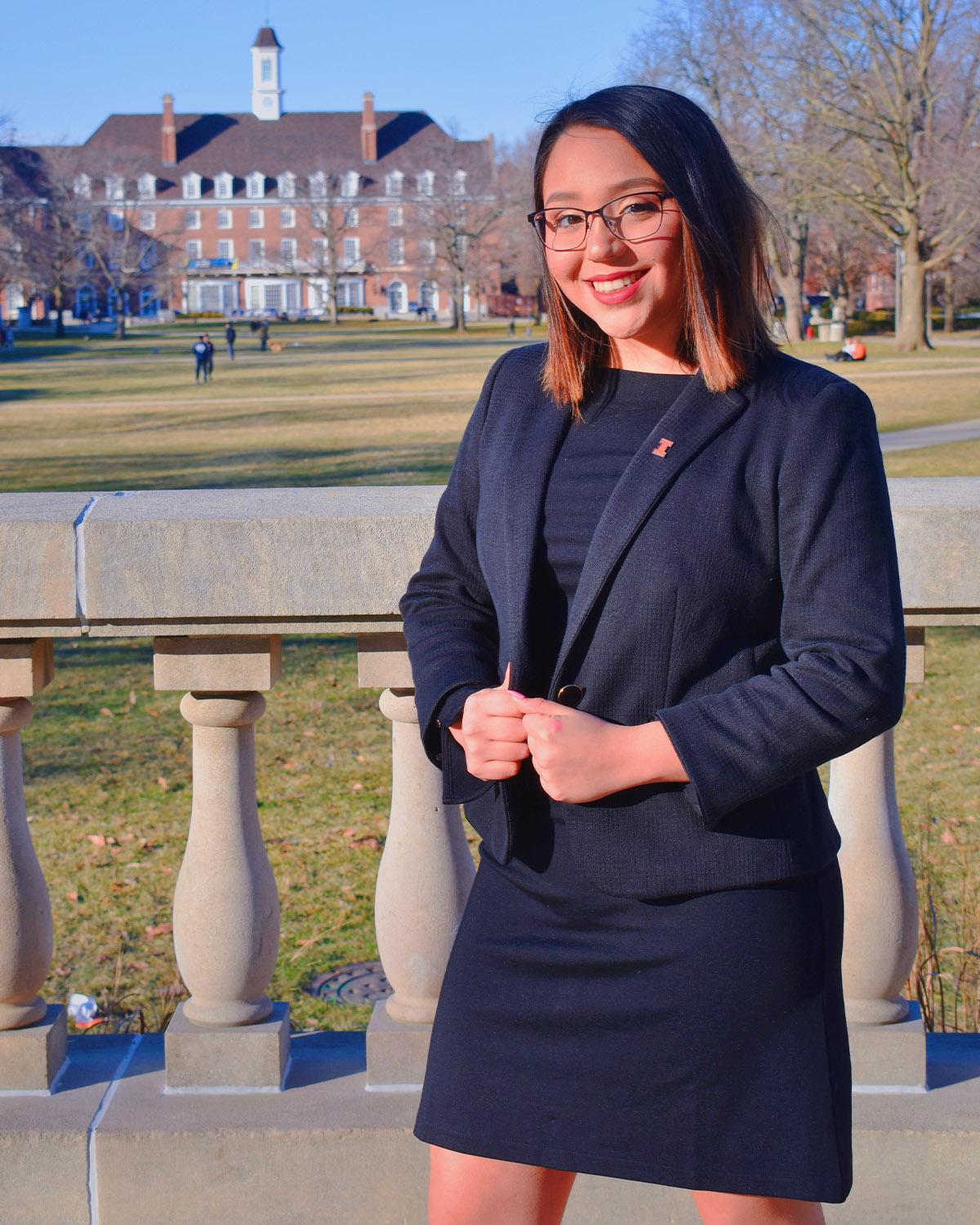 “I never want to plateau or stay the same,” says Alexis, the first Latinx Student Body President at UIUC. “I always want to continue growing.”

What made you interested in pursuing political science as your major?

“I want to be a lawyer for sure. I’m still debating between corporate or constitutional law. …  For law school, you don’t need any specific major, but I just really like political science; especially in our current world today, there’s always so much happening and changing. So, I think it’s a really good major to have right now.”

How did you get involved in Illinois Student Government?

“So, it was our freshman convocation where everyone went into the basketball stadium and the Chancellor and admin gave their presentation. And the Student Body President at that time went up and spoke and gave a speech about it. At that moment, I was like, ‘Oh, okay, that seems like a really cool organization to be a part of!’

“I also knew that with my personality and my ambitions, Student Government was a really good thing to be involved in. Those two things really pushed me to join the organization.”

Why did you want to run for President of ISG?

“I wanted to eventually run because I just really loved the community of ISG. It’s really welcoming and great, and everyone’s able to have their voice heard. So, I wanted to be part of that community and grow in it.

“But, the biggest part of it was improving things for students on campus. I love UIUC, but there are also changes that need to happen, which is similar to any university. It’s great, but we can always keep growing, right?”

What was the campaign process like? What parts of the process did you enjoy the most?

“A lot of people who campaign, we start thinking about it in December. From December to about February is when we developed our plan. We would cold-call a lot of different organizations. Some responded, some didn’t, but that was the whole point—just reaching out to a bunch of different people before the campaigning started.

“The official campaigning started in the beginning of March. It was about two weeks, I would say. It was really short. We were just out on the Quad all day. I really liked being able to go to a bunch of different communities or organizations on campus and talk to them about my platform and ask them, ‘What kind of changes do you want to see?’ and then taking all that information together and creating the best platform.”

How did it feel to be elected?

“I felt great, because we had just worked so hard. Everyone was there and we’re just kind of shaking, because we basically put our souls into this campaign and then it worked in our favor. So, it felt great. It was awesome.

“I have been in a lot of different leadership roles, but this is like the ultimate role, because there’s a lot of pressure to make sure you’re hearing the voices of the students and actively trying to respond to it in an appropriate and timely way.” 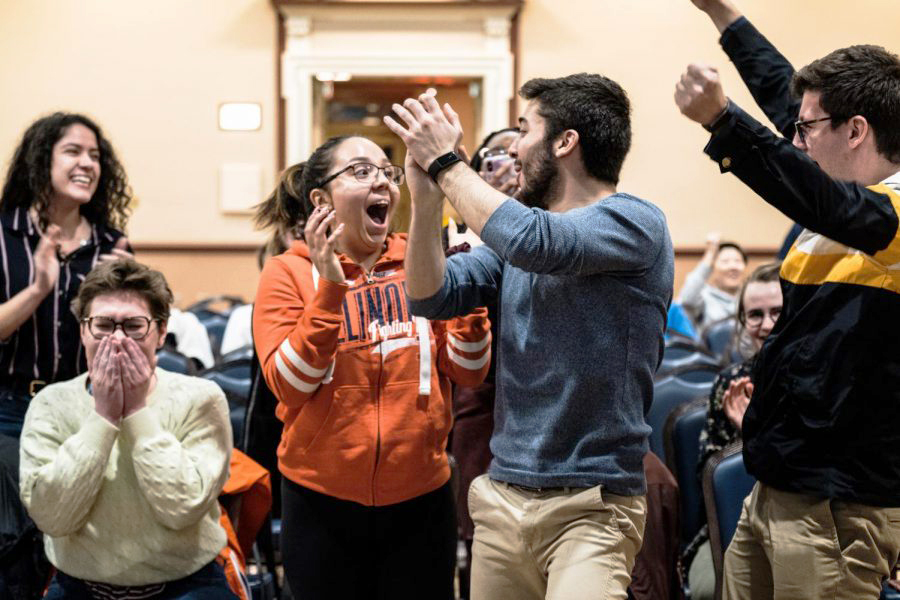 Alexis and her running partner, Chris, celebrate after learning of their victory. During their tenure as president and vice president, the two hope to improve access to mental health resources on campus.

How does it feel to be the first member of the Latinx community to hold this office?

“It feels really good, because being Hispanic … there’s not so many leaders that I really looked up to when I was younger. The main one was Sonia Sotomayor, who is a Supreme Court judge; I really admire her. … Another part of it is being able to understand the struggles of that community and being able to use that experience in the role.”

In an ideal world, what would you like to accomplish during your tenure as President of ISG?

“One of my biggest goals right now, and I’ve been talking with different administrators about how we’re going to try to achieve it, is changing the way counseling works on campus. Currently, students have to call really early in the morning if they want to get an appointment to talk to somebody, which is really not the ideal way to go.

“So, what I want to work on is changing that outdated system and having a way that students can book appointments online so they can go and talk to somebody. Because mental health is a very serious thing, especially on a college campus. … I think that’s one of my biggest goals to accomplish.”

How do you think COVID-19 will impact your position?

“It affects everything: campus life and the students, which we represent. So, while it has brought more struggles, my mindset is just to keep positive. You know, this is an awful situation that we’re in, but if I have to bring one good thing out of it, I would say that it’s at least helping me deal with sudden situations, which will prepare me for the future.”

“Representing the students. A lot of students don’t really know ISG exists, or they think, ‘Oh, it’s just a place for Poli-Sci kids to go play politics,’ which it’s not that at all. So, people should go to Public Comment and say, ‘Hey, members of ISG, this is an issue. What can you guys do about it?’ I think that’s why people should pay attention to it. We represent the students, and that’s why they should be active in that.”

If someone wants to get involved in ISG, where can they start?

“There’s a bunch of different ways you could get involved. The most basic way, I would say, is joining a committee. That would be in our Senate branch. … We also always have applications up. Right now, we’re putting applications up for our cabinet positions. … Or, you can just attend the Wednesday meetings and then see what you would like to do.” 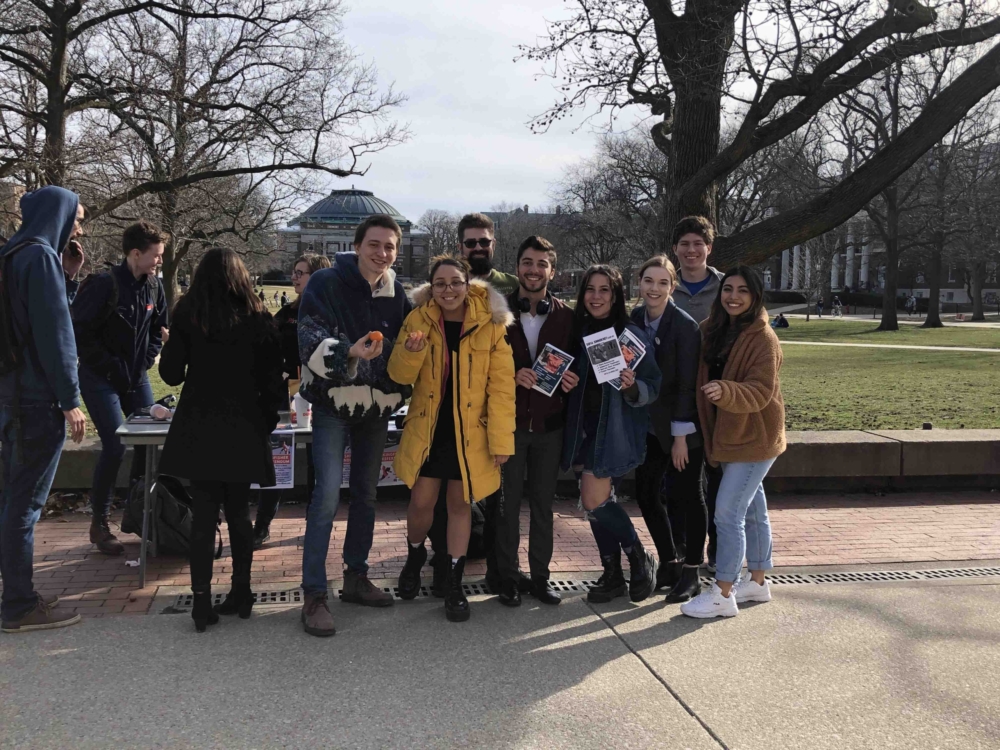 Alexis and other members of Illinois Student Government (ISG) pose for a photo on Quad. ISG is open to anyone who wants to get involved and has a passion for the UIUC student body.

What would you like to tell others about your experience?

“I’ve always been a very ambitious and motivated person. I’ve always had my goals. So, my whole journey to this position has always been making sure I know what I want and I know how to get there. It’s always been about climbing up and never staying the same.

“Of course, there’s also times where I haven’t met the goals or I’ve had a lot of obstacles along the way. … But, that’s just what gives you more energy to achieve those goals later on.”

You’re also a first-generation student. Has that impacted your experience?

“Being a first-generation student, I’ve always just wanted to make my parents proud, because they’ve worked really hard for where they are in life now, and they’ve had their own struggles as well. They never had the opportunity to go to college. … So, it’s kind of taking every opportunity that I have, because my parents weren’t able to do it.

Do you have any words of advice for other first-generation students?

“Don’t ever let people belittle your accomplishments because of your race or because you’re a first-generation student. Don’t let anybody else affect you … just stay motivated and achieve your goals.”

Finally, what would you say to an incoming student that might help them during this time of transitioning to college life amidst a pandemic?

“We have your back; we’re here for you. The U of I community is so diverse and so welcoming, and I would say beautiful,  because there are just so many different groups of people here.

“We’re all on the same boat, we’re all going to be struggling through COVID in our own way. … We didn’t know this was gonna happen, but now we have to deal with this and we have to go through these obstacles. So use this situation to grow and learn and be able to navigate through life.”