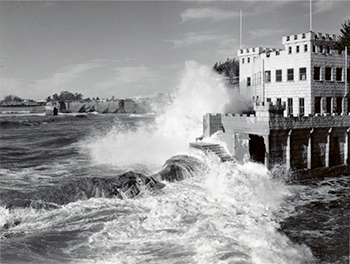 Consisting of more than 10,000 images, the collection documents over a century of Santa Cruz County history, featuring original photographs and copy prints from 1866 to 1995.

The photographs portray the county’s rich history in agriculture, tourism, industry and culture. Highlights of the collection include photographs of the world famous Santa Cruz Boardwalk and Casino and other attractions that have made this area a popular tourist destination for generations–plus an extensive array of images depicting Santa Cruz’s booming film industry in the early part of the 20th century.

The collection also reveals a portrait of the daily lives of Santa Cruz residents over the years and where they lived, worked and played. While the majority of photographs document the city of Santa Cruz, there are also many photos of the North and South county as well.

“As memory institutions, libraries are key in preserving history and making it as accessible as possible,” noted University Librarian Elizabeth Cowell. “In this instance—the work to preserve and share our unique local history—the power and importance of this role is clear.”

The main source for the photographs in the collection is Preston Sawyer, a local historian, journalist, photographer, and collector of Santa Cruz memorabilia, who was born in Santa Cruz in 1899. In his youth, he worked as an extra for a number of movies filmed in the Santa Cruz area, and as a prolific amateur photographer took hundreds of pictures of actors, directors, film crews, and locations.

Sawyer used his own photographs, along with those he collected, to accompany a weekly feature, “Santa Cruz Yesterdays,” that he wrote for more than a decade in the Santa Cruz Sentinel. After Sawyer’s death in 1968, UCSC acquired his photographs.

“This collection is a boon to local historians, genealogists and amateur researchers,” noted Teresa Mora, head of Special Collections & Archives at the UCSC Library.

“It provides unique insights into various aspects of Santa Cruz history, as well as a better and deeper understanding of how the Santa Cruz of today came to be,” she added.

The Santa Cruz County Historic Photograph Collection can be searched and viewed as part of the UCSC Library’s Digital Collections. Detailed information about the collection is also available in the finding aid included in the Online Archive of California.