Lab, Computer Experiments to Improve Simulations of Signaling between Nerve and Muscle cells, Offering Clues to Treating a Type of Neurological Disease

A new $750,000 grant from the National Science Foundation will continue a lab-computer collaboration that accurately simulated communications between nerve cells and muscle cells. The project has immediate applications in treating a type of neurological disease called Lambert-Eaton Myasthenic Syndrome (LEMS). It also offers fundamental insights into how nerve cells communicate with muscle cells in health and disease.

“In our previous work we studied the structure of the active zone of the nerve cell and how the structure and function of the active zone are related to each other,” said Rozita Laghaei, a research scientist at the Pittsburgh Supercomputing Center (PSC) and a principal investigator in the new grant. “In this next step, we’re going to work more on the action potential. Any little change in the action potential can cause a very different probability of neurotransmitter release by a nerve cell. We want to have a more realistic system” that recreates that phenomenon.

Scientists at PSC and the University of Pittsburgh had in earlier work simulated the role of the calcium channels of the nerve-cell membrane in communication between nerve and muscle cells in the frog and mouse. The work faithfully reproduced the nerve-to-muscle signaling differences seen in those species. As an extension of this work, the team will investigate the additional contribution of nerve-cell-membrane calcium-activated potassium channels and the shape of the action potential (AP), the pulse of electrical activity that travels along a nerve fiber. The principal investigators of the project are Laghaei and Stephen Meriney, a professor of neuroscience at Pitt; collaborators include Robert Poage at the University of North Carolina at Pembroke and Thomas Blanpied at the University of Maryland School of Medicine. 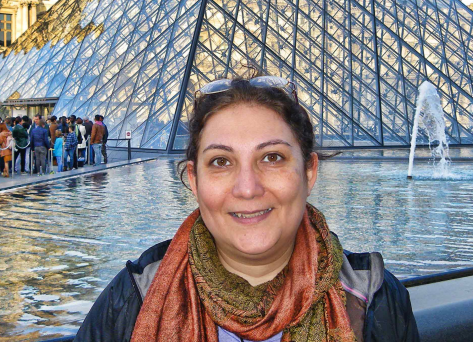 Every Move You Make

Every move we make, every thought we have, every emotion we feel depends on electrical signals being transmitted between nerve cells and from nerve cells to muscle cells. The cells accomplish this by maintaining an imbalance of electrically charged atoms, called ions, on either side of the cell membrane. This electrical imbalance turns each cell into a tiny battery, ready to discharge.

The AP is an electrical spike, a brief rise and then fall in the voltage across the membrane caused by the flow of sodium and potassium ions into and out of the neuron. Nerve cells use the AP to communicate and conduct information. The specific “shape” of the AP is, in part, governed by calcium-activated potassium channels. This AP waveform is a critical driver of the opening of calcium channels that allow calcium ions to enter the cell. The entry of calcium triggers release of chemical messengers called neurotransmitters, which relay the signal to neighboring nerve cells or muscle cells.

Nerve cells respond to many signals. These can vary depending on the particular type of cell from external factors such as temperature, touch, injury, smell, sounds, or light to a signal from another nerve cell. When the nerve cell detects such an incoming signal, it can respond with an AP. The AP, or action potential, first fires near the part of the cell that detected the signal, then moving along the length of the cell until it reaches the axon terminal. The terminal is the part of the nerve cell that signals either to a neighboring nerve cell or to a muscle cell.

“The specific time course and shape of the action potential is an important regulator of the events that occur at axon terminals to initiate communication,” said Meriney. “In particular, our new studies aim to study the ion channels that control the shape of the action potential at axon terminals, and how this is affected in neurological diseases.”
Much of the PSC/Pitt group’s earlier work focused on understanding the step after the signal reaches the axon terminal. In this step the signal has to cross the synapse, the narrow space between the first and second cell. Alternating between experiments in the laboratory and in the computer, the scientists showed how the AP caused tiny sacs of neurotransmitters to empty into the synapse. When the neurotransmitters float across the synapse and stick to proteins in the second cell’s membrane, it makes the second cell respond. It can do so either by passing along the signal if it’s a nerve cell, or by contracting if it’s a muscle cell. The team’s work also demonstrated how the different physical arrangements of membrane proteins at these release sites (or active zones), can lead to differences in neurotransmitter release patterns in both frogs and mice.

In this earlier work, the team used software called MCell to create a virtual nerve cell/muscle cell pair. They ran their simulations on PSC’s Bridges supercomputing platform. The collaborators upcoming work will be performed on Bridges and the new Bridges-2 system, which will become operational in the fall of 2020. MCell was developed by the National Center for Multiscale Modeling of Biomedical Systems, made up of PSC, Pitt, the Salk Institute and Carnegie Mellon University. But MCell has a limitation. It can’t simulate the various factors that impact the shape of the AP to investigate how they affect the system.

Part of what the new grant will fund is the programming work needed to integrate MCell with NEURON. The latter is another program, developed at Yale University, which enables scientists to change the action potential of a virtual neuron on the fly. Integrating MCell and NEURON will enable a new round of experimental exchange between laboratory and computer scientists. The integrated programs will allow the researchers to investigate how subtle changes in action potential shape can alter how and when the nerve cell releases its neurotransmitters.

The work has immediate application to LEMS, a neurological disease in which a person’s immune system attacks calcium channels. The immune attack removes some of these calcium channels from the axon terminal. This leads to a weaker communication between nerve and muscle, which causes weaker muscle contractions and an inability of patients to move and function normally.

The medication 3,4 diaminopyridine (DAP), recently approved by the FDA, can help increase release of neurotransmitters by blocking potassium channels. These channels normally reverse the AP. By partially blocking potassium channel function, DAP lengthens the AP. But DAP does not completely reverse the weakness caused by LEMS, partly because it can have side effects that limit the dose patients can tolerate.

“We have collaborated with Peter Wipf’s group in the Chemistry Department at Pitt to develop a new potential treatment for LEMS,” Meriney said. “While DAP is helpful, our studies show that [patients] might benefit from a combination therapy that combines DAP with a new calcium channel drug, called GV-58, that we are developing.”

The combined effects of GV-58 and DAP were greater than those of their individual doses in lab experiments. Doctors would like to test the combination of DAP and GV-58 on LEMS, but the precise mixture of the two drugs needs to be optimized. Mouse model experiments capable of testing the combination are expensive and difficult to obtain. So the scientists want to have an idea of what the right doses will be ahead of time, to minimize these obstacles. A major goal of the new work by the Pitt/PSC scientists will be to vary levels of the two drugs in the computer simulation. This will show how the medications affect action potential and in turn neurotransmitter release. Answering that question could help determine what doses of the drugs would be safe and effective enough for confirmation testing in mice, and eventually for trials in patients.