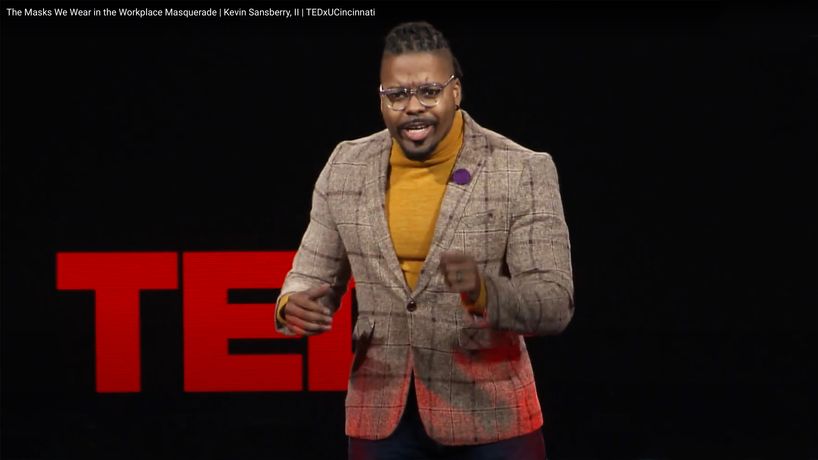 In a February TEDx Talk in Cincinnati, Kevin Sansberry II discussed workplace facades – employees hiding their personal values and taking on personas that reflect a company’s priorities. He successfully defended his dissertation on the subject in August and will graduate as a member of the DBA program’s inaugural cohort. (Screenshot from 2020 TEDx Talk recording)

With the onset of COVID-19, masks have become a necessity for running errands, attending in-person classes and enjoying a night out.

But even before they became a staple of everyday life, Kevin Sansberry II was already researching masks – though not the physical kind.

The University of Missouri–St. Louis DBA student’s dissertation focused on masks in the workplace – the ways employees hide their personal values and take on personas that reflect the company’s priorities. He successfully defended his work in August and will graduate from the College of Business Administration as part of the DBA program’s inaugural cohort.

His research on facade creation was inspired by a moment in Sansberry’s own life when he was pressured to reflect values that differed from his own. Over time, he noticed that others had similar stories, particularly women and minority populations.

“It doesn’t get any attention in the academic literature,” he said. “It’s not a widely researched phenomenon, but it felt super important for me to talk about it because I’ve been impacted by it myself.”

His research was based on surveys distributed to more than 150 subjects throughout the United States, asking about their personal experiences.

Sansberry likened facade creation to wearing a mask that hides one’s true self. Essentially, an employee bows to pressure from those around them and trades their own values for the company’s. This results in a persona that appears very different from how the employee authentically feels and thinks.

The dissertation looked at workplace facades through the lens of abusive supervision.

“I wanted to find the most oppressive situation a person could be in at a workplace, and abusive supervision hit that mark,” Sansberry said. “I wanted to see if that could drive the mechanism of wearing that mask at a greater rate. Ultimately, I found that it did.”

Another finding that emerged from the research is that intersectionality – the combination of multiple identities such as race and gender – drives facade creation at a greater rate. In essence, the more areas in which an employee considers themselves a minority, the more likely they are to hide their true values.

The surveys also revealed that co-workers provide a barrier between employees and abusive supervisors.

“Having a good support system actually buffers them so they might not wear the mask as much,” he said. “That shows the power of community and the power of being together with other people.”

Sansberry spoke on the subject at a February TEDx Talk in Cincinnati. As he looked over the audience, he noticed some attendees frowning and worried they might not like the subject. However, after the speech, he was surprised by the number of audience members who spoke to him about the topic’s relevance in their own lives.

“I remember this doctor who came up to me,” Sansberry said. “He was like, ‘I didn’t know what you were talking about, but you explained it so well. That makes perfect sense.’ I thought he’d hated it the whole time I was doing my speech.”

As Sansberry dug into researching facade creation, he developed an appreciation for the warmth and authenticity he saw in UMSL’s DBA staff members.

“The staff are so helpful and supportive of making sure our needs are met,” he said. “It felt like a safety net. It’s so encouraging and validating to meet down-to-earth professors who value you as a human. It was great to have professors who respected my expertise and wanted to support me.”

The DBA program’s structure allows students to work full-time while pursuing a degree, and Sansberry was able to continue making an impact through his role as vice president of people, values and culture at StriveTogether, a nonprofit committed to ensuring equitable outcomes for children.

“We value ourselves as problem-solvers, bringing together diverse groups of people to solve the problem of inequitable systems, especially in our education sector, as it relates to those who are most oppressed,” he said. “We work on closing gaps between children to get community and systems transformation.”

StriveTogether features a network of partners throughout the U.S. that are committed to providing opportunities for all children.

Sansberry helps mold the organization’s culture and is in charge of human resources as well as diversity, equity and inclusion work. He focuses on initiatives that improve the employee experience and implements policy changes as needed.

He puts the skills he learned during the DBA program into practice as a leadership consultant and executive coach at his company KEVRA Consulting. He’s worked with H&R Block, the Henry W. Bloch School of Management at UMKC, the Ewing Marion Kauffman Foundation and more, helping the companies with hiring processes and leadership policies.

“The work I do with organizational culture, with leadership coaching is based on closing the gap between the research literature and what practitioners actually do in real life,” he said. “Using my degree, I’m able to provide research-informed and evidence-based strategies to people in the field.”

He pointed out that the most important thing – whether in the workplace or college classroom – is to make sure one’s values are reflected.