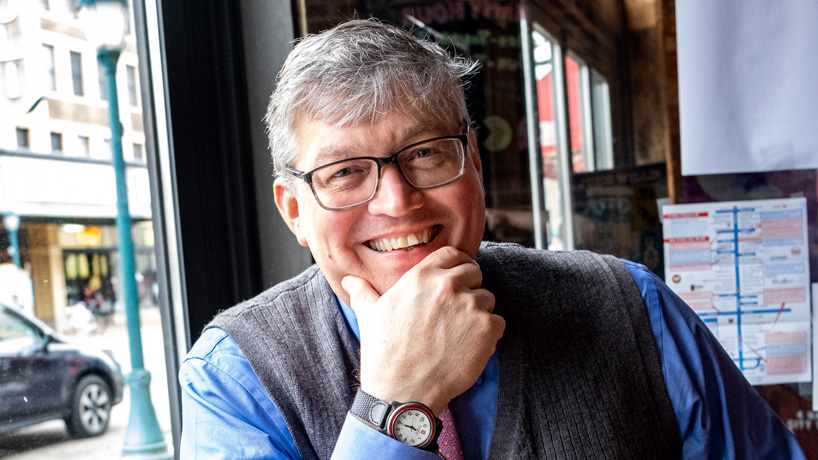 Professor Jon McGinnis’ paper “A Continuation of Atomism: Shahrastani on the Atom and Continuity” was included in the 39th volume of The Philosopher’s annual, which recognized the 10 best articles published in philosophy in 2019. (Photo by August Jennewein)

Jon McGinnis had simply been trying to satisfy his own curiosity.

The professor and chair of the Department of Philosophy at the University of Missouri–St. Louis had been studying the work of respected medieval Islamic thinker Fakhr al-Din al-Razi, including reading commentary from philosopher Nasir al-Din al-Tusi, who followed not long after him in the 13th Century.

He saw those writings suggested that al-Razi’s ideas on atomism – the philosophy that the physical world is made up of fundamental indivisible components called atoms – might have been borrowed from a lesser known, earlier figure: Muhammad al-Shahrastani. So McGinnis began an investigation to find out, getting Shahrastani’s writings and translating them from Arabic into English before wrestling with the concepts at their core.

As he collected his findings in a paper drafted in airports and on planes while traveling between conferences in Europe a few years ago, McGinnis never stopped to think that the thing he was writing would bring him national or international acclaim.

His paper “A Continuation of Atomism: Shahrastani on the Atom and Continuity” was published in the Journal of the History of Philosophy in 2019. Last month, it was chosen for the 39th volume of The Philosopher’s Annual, which has the mission of recognizing the 10 best articles published in philosophy each year.

“It came as a complete surprise to me,” McGinnis said. “All of a sudden, my email inbox is exploding with all these congratulations, and I’m getting texts. I’m thinking, ‘What the heck is happening?’ It was not on my radar.”

The Philosopher’s Annual was started in 1978, and McGinnis is the first author from the University of Missouri System to have his work included in one of its volumes.

The Annual has now recognized 390 papers, but most all of them deal with contemporary philosophy, whereas McGinnis’ research focus is on the medieval world.

His paper is the first grappling with an Islamic thinker to be selected for the annual.

“I feel like I’ve broken through a barrier there,” McGinnis said. “That makes me pleased.”

McGinnis research reveals how Shahrastani developed a new form of atomism, which viewed atoms as discrete entities within a body actualized only when separated from the whole.

His theory addresses a critique Avicenna made of atomism roughly a century before, and as McGinnis shows, Shahrastani develops ideas that would not find traction in the Latin world for several centuries.

“I think the reason why my article got some of the publicity it has is the footnotes,” McGinnis said. “Because in some of these footnotes, I point out that all of these things that were being done in the 14th, 15th and 16th centuries in the Latin world as innovations are there really, really, really early in the Islamic tradition. I made a lot of corrections to folks by saying, ‘Here’s the text.’ It’s not like I’m making crazy claims, I really am going back to the text.”

Rather than originating with Greek philosophers such as Aristotle and Democritus, McGinnis said the source for Islamic atomism likely comes from India or Iran.

McGinnis didn’t set out to study the work of medieval Islamic philosophers such as Avicenna, Averroes or Moses Maimonides, a Jewish philosopher who had many of the same influences. McGinnis’ original interest lay in the origins of early modern physics, but as he studied, he kept reading about ideas proposed by medieval Islamic or Arabic sources.

He wanted to learn more, but his professors in the doctoral program at the University of Pennsylvania had all been schooled in the Latin tradition. They suggested he consult with faculty members in the Center for Middle Eastern Studies.

McGinnis wound up writing his dissertation on Aristotle and Avicenna’s temporal theories. He has continued to write extensively about Avicenna since coming to UMSL in 2000.

He remains most proud of his work translating Avicenna’s natural philosophy with separate volumes in Arabic and English.

Lately, McGinnis has been working with his colleague Billy Dunaway to bring together medieval Islamic philosophy and apply it to contemporary questions about the epistemology or religion with the support of a $933,000 grant from the John Templeton Foundation as well as additional funding. The project is titled “The Christian West and Islamic East: Theology, Science, and Knowledge.“