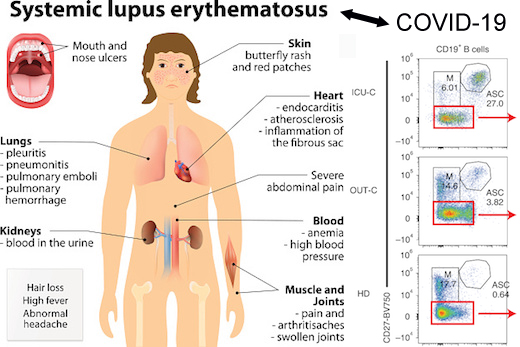 Their findings point towards tests that could separate some COVID-19 patients who need immune-calming therapies from others who may not. They also may begin to explain why some people infected with SARS-CoV-2 produce abundant antibodies against the virus, yet experience poor outcomes.

The results were published online on Oct. 7 in Nature Immunology.

The Emory team’s results converge with recent findings by other investigators, who found that high inflammation in COVID-19 may disrupt the formation of germinal centers, structures in lymph nodes where antibody-producing cells are trained. The Emory group observed that B cell activation is moving ahead along an “extrafollicular” pathway outside germinal centers – looking similar to they had observed in SLE.

B cells represent a library of blueprints for antibodies, which the immune system can tap to fight infection. In severe COVID-19, the immune system is, in effect, pulling library books off the shelves and throwing them into a disorganized heap.

Before the COVID-19 pandemic, co-senior author Ignacio (Iñaki) Sanz, MD and his lab were focused on studying SLE and how the disease perturbs the development of B cells.

Sanz is head of the division of rheumatology in the Department of Medicine, director of the Lowance Center for Human Immunology, and a Georgia Research Alliance Eminent Scholar. Co-senior author Frances Eun-Hyung Lee, MD is associate professor of medicine and director of Emory’s Asthma/Allergy Immunology program.

“We came in pretty unbiased,” Sanz says. “It wasn’t until the third or fourth ICU patient whose cells we analyzed, that we realized that we were seeing patterns highly reminiscent of acute flares in SLE.”

In people with SLE, B cells are abnormally activated and avoid the checks and balances that usually constrain them. That often leads to production of “autoantibodies” that react against cells in the body, causing symptoms such as fatigue, joint pain, skin rashes and kidney problems. Flares are times when the symptoms are worse.

Whether severe COVID-19 leads to autoantibody production with clinical consequences is currently under investigation by the Emory team. Sanz notes that other investigators have observed autoantibodies in the acute phase of the disease, and it will be important to understand whether long-term autoimmune responses may be related to the fatigue, joint pain and other symptoms experienced by some survivors.

“It’s an important question that we need to address through careful long-term follow-up,” he says. “Not all severe infections do this. Sepsis doesn’t look like this.”

In lupus, extrafollicular B cell responses are characteristic of African-American patients with severe disease, he adds. In the new study, the majority of patients with severe infection were African-American. It will be important to understand how underlying conditions and health-related disparities drive the intensity and quality of B cell responses in both autoimmune diseases and COVID-19, Sanz says.

The study compared 10 critically ill COVID-19 patients (4 of whom died) admitted to intensive care units at Emory hospitals to 7 people with COVID-19 who were treated as outpatients and 37 healthy controls.

People in the critically ill group tended to have higher levels of antibody-secreting cells early on their infection. In addition, the B cells and the antibodies they made displayed characteristics suggesting that the cells were being activated in an extrafollicular pathway. In particular, the cells underwent fewer mutations in their antibody genes than seen in a focused immune response, which is typically honed within germinal centers.

The Nature Immunology paper was the result of a collaboration across Emory. The co-first authors are Matthew Woodruff, PhD, an instructor in Sanz’s lab, and Richard Ramonell, MD, a fellow in pulmonary and critical care medicine at Emory University Hospital.

Ramonell notes that the patients studied were treated early during the COVID-19 pandemic. It was before the widespread introduction of the anti-inflammatory corticosteroid dexamethasone, which has been shown to reduce mortality.

The team’s findings could inform the debate about which COVID-19 patients should be given immunomodulatory treatments, such as dexamethasone or anti-IL-6 drugs. Patients with a greater expansion of B cells undergoing extrafollicular activation also had higher levels of inflammatory cytokines, such as IL-6.

Some COVID-19 patients have been given drugs that push back against IL-6, but results have been mixed in clinical trials. Patients with markers of unregulated immune responses may be appropriate candidates for treatment with anti-inflammatory drugs that target the corresponding pathways, Sanz suggests.