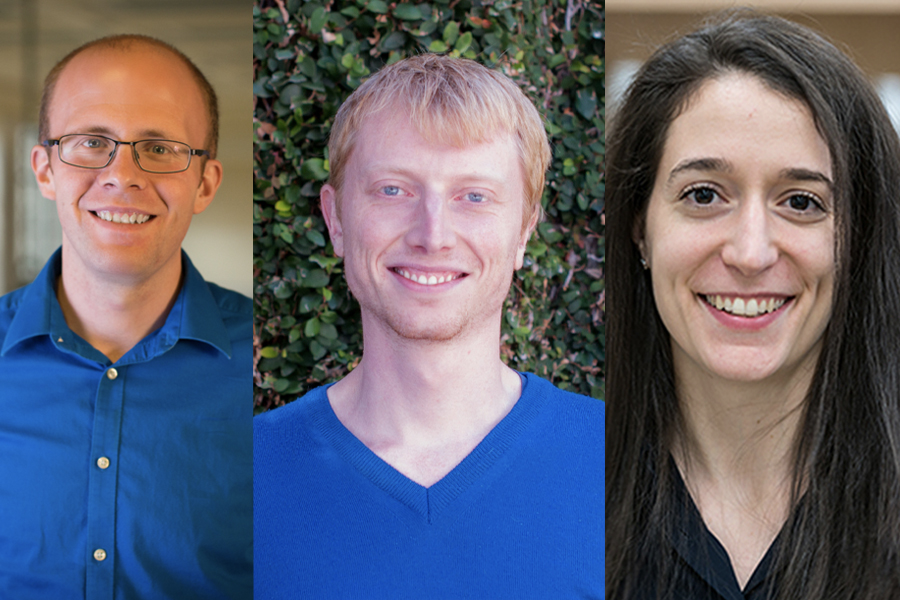 Three MIT faculty members have been chosen to receive the New Innovators Award from the National Institutes of Health (NIH) as part of its High-Risk, High-Reward Research program.

“The flexibility provided by this award will allow my young lab to pursue the most interesting and important leads we uncover as we build new genomic tools to understand human microbiomes. It means a lot to receive this recognition as an innovator,” Lieberman says.

The NIH Common Fund supports a series of exceptionally high-impact programs that cross NIH institutes and centers. Common Fund programs pursue major opportunities and gaps in biomedical research that require trans-NIH collaboration to succeed. Each award recipient will receive $1.5 million in direct cost funding, budgeted for five years but given up front to allow the recipients to use as they see fit.

The High-Risk, High-Reward Research program catalyzes scientific discovery by supporting research proposals that, due to their inherent risk, may struggle in the traditional peer-review process despite their transformative potential. Program applicants are encouraged to think “outside the box” and to pursue trailblazing ideas in any area of research relevant to the NIH’s mission to advance knowledge and enhance health.

The New Innovator Award, established in 2007, supports unusually innovative research from early career investigators who are within 10 years of their final degree or clinical residency and have not yet received a research project grant or equivalent NIH grant.

Birnbaum is affiliated with the Koch Institute for Integrative Cancer Research at MIT. The Birnbaum Lab focuses on understanding and manipulating immune responses in the context of cancer and HIV infection by employing protein biochemistry, protein engineering, next-generation sequencing, and bioinformatics.

Birnbaum received a BA in chemical and physical biology at Harvard University in 2008. He went on to Stanford University, where he completed his PhD in immunology in 2014. Continuing at Stanford for his postdoc, he worked in Professor Carla Shatz’s laboratory, studying novel roles for immune receptors expressed by neurons in neural development and neurodegenerative disease.

Birnbaum was a recent recipient of the Michelson Prize 2020.

Hansen joined MIT as an assistant professor of biological engineering in February 2020. His lab explores 3D genome structure and function in time and space. Specifically, the Hansen Lab is developing new super-resolution and single-molecule microscopy methods to follow chromatin looping and gene regulation from “birth-to-death” inside living cells.

Hansen obtained his undergraduate and master’s degree in chemistry at Oxford University in 2010. He received his PhD in chemistry and chemical biology from Harvard University in 2015. For his postdoc at the University of California at Berkeley, Anders developed new imaging approaches for dissecting 3D genome organization dynamics with single-molecule resolution in living cells.

A computational and mathematical biologist, Lieberman, the Hermann L. F. von Helmholtz Career Development Professor, is also a member of the core faculty at the Institute for Medical Engineering and Science (IMES), and the Harvard-MIT Program in Health Sciences and Technology (HST). She is also an associate member of both the Broad and Ragon institutes. Her lab studies how bacteria mutate and evolve during health, with a major focus on human skin microbiomes. Her lab uses mutations as a tool to uncover mechanistic understanding of bacterial behavior in vivo, toward the long-term goal of enabling the precise manipulations of microbiomes in the clinic and the environment. Her lab uses experimental, computational and modeling approaches.

Lieberman trained in molecular biology and mathematics at Northwestern University, where she conducted research in the laboratory of Jon Widom and was funded by a Barry M. Goldwater Scholarship. She then earned a PhD in systems biology from Harvard University, where she conducted research in Roy Kishony’s laboratory. During her graduate research, Lieberman developed new genomic approaches for understanding how bacteria evolve during infections of individual people, and developed new experimental tools for dissecting the evolution of antibiotic resistance. As a postdoc in Eric Alm’s lab at MIT, she further developed and applied these genomic approaches to understand the microbes that colonize us during health.