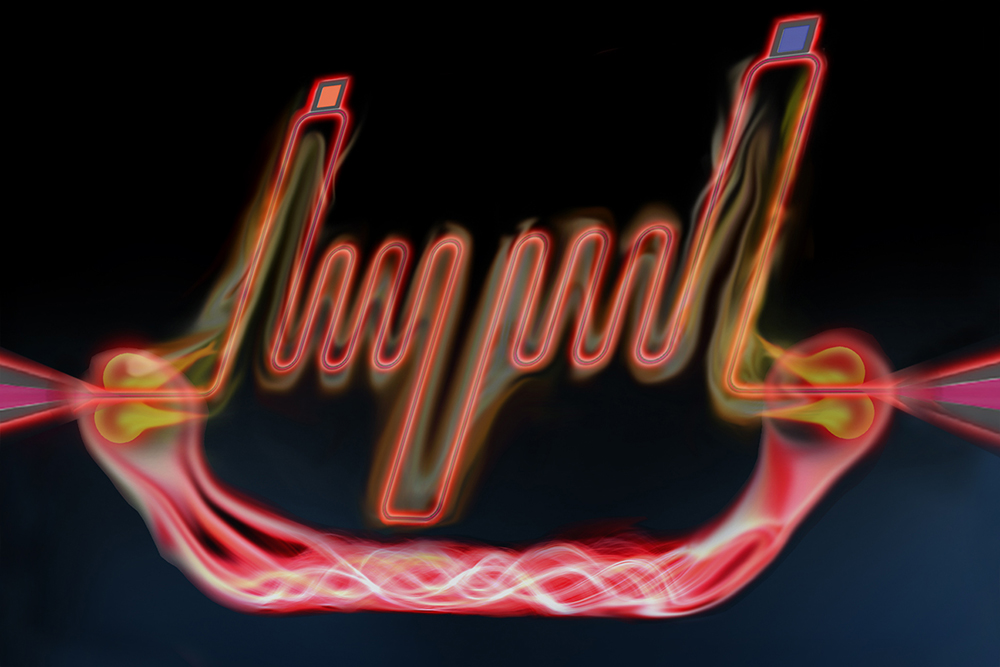 MIT researchers using superconducting quantum bits connected to a microwave transmission line have shown how the qubits can generate on demand the photons, or particles of light, necessary for communication between quantum processors.

The advance is an important step toward achieving the interconnections that would allow a modular quantum computing system to perform operations at rates exponentially faster than classical computers can achieve.

“Modular quantum computing is one technique for reaching quantum computation at scale by sharing the workload over multiple processing nodes,” says Bharath Kannan, MIT graduate fellow and first author of a paper on this topic published today in Science Advances. “These nodes, however, are generally not co-located, so we need to be able to communicate quantum information between distant locations.”

In classical computers, wires are used to route information back and forth through a processor during computation. In a quantum computer, the information itself is quantum mechanical and fragile, requiring new strategies to simultaneously process and communicate information.

“Superconducting qubits are a leading technology today, but they generally support only local interactions (nearest-neighbor or qubits very close by). The question is how to connect to qubits that are at distant locations,” says William Oliver, an associate professor of electrical engineering and computer science, MIT Lincoln Laboratory fellow, director of the Center for Quantum Engineering, and associate director of the Research Laboratory of Electronics. “We need quantum interconnects, ideally based on microwave waveguides that can guide quantum information from one location to another.”

That communication can occur via the microwave transmission line, or waveguide, as the excitations stored in the qubits generate photon pairs, which are emitted into the waveguide and then travel to two distant processing nodes. The identical photons are said to be “entangled,” acting as one system. As they travel to distant processing nodes, they can distribute that entanglement throughout a quantum network.

“We generate the entangled photons on demand using the qubits and then release the entangled state to the waveguide with very high efficiency, essentially unity,” says Oliver.

“Our work presents a new architecture for generating photons that are spatially entangled in a very simple manner, using only a waveguide and a few qubits, which act as the photonic emitters,” says Kannan. “The entanglement between the photons can then be transferred into the processors for use in quantum communication or interconnection protocols.”

While the researchers said they have not yet implemented those communication protocols, their ongoing research is aimed in that direction.

“We did not yet perform the communication between processors in this work, but rather showed how we can generate photons that are useful for quantum communication and interconnection,” Kannan says.

Previous work by Kannan, Oliver, and colleagues introduced a waveguide quantum electrodynamics architecture using superconducting qubits that are essentially a type of artificial giant atom. That research demonstrated how such an architecture can perform low-error quantum computation and share quantum information between processors. This is accomplished by adjusting the frequency of the qubits to tune the qubit-waveguide interaction strength so the fragile qubits can be protected from waveguide-induced decoherence to perform high-fidelity qubit operations, and then readjusting the qubit frequency so the qubits are able to release their quantum information into the waveguide in the form of photons.

This paper presented the photon generation ability of the waveguide quantum electrodynamics architecture, showing that the qubits can be used as quantum emitters for the waveguide. The researchers demonstrated that quantum interference between the photons emitted into the waveguide generates entangled, itinerant photons that travel in opposite directions and can be used for long-distance communication between quantum processors.

“Modularity is a key concept of any extensible system,” says Oliver. “Our goal here is to demonstrate the elements of quantum interconnects that should be useful in future quantum processors.”