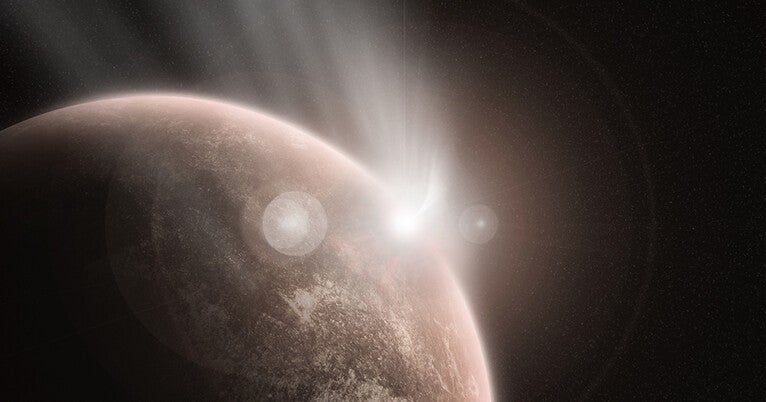 A growing body of research suggests the planet Venus may have had an Earth-like environment billions of years ago, with water and a thin atmosphere.

Yet testing such theories is difficult without geological samples to examine. The solution, according to Yale astronomers Samuel Cabot and Gregory Laughlin, may be closer than anyone realized.

Cabot and Laughlin say pieces of Venus — perhaps billions of them — are likely to have crashed on the moon. A new study explaining the theory has been accepted by the Planetary Science Journal.

The researchers said asteroids and comets slamming into Venus may have dislodged as many as 10 billion rocks and sent them into an orbit that intersected with Earth and Earth’s moon. “Some of these rocks will eventually land on the moon as Venusian meteorites,” said Cabot, a Yale graduate student and lead author of the study.

Cabot said catastrophic impacts such as these only happen every hundred million years or so — and occurred more frequently billions of years ago.

“The moon offers safe keeping for these ancient rocks,” Cabot said. “Anything from Venus that landed on Earth is probably buried very deep, due to geological activity. These rocks would be much better preserved on the moon.”

Many scientists believe that Venus might have had an Earth-like atmosphere as recently as 700 million years ago. After that, Venus experienced a runaway greenhouse effect and developed its current climate. The Venusian atmosphere is so thick today that no rocks could possibly escape after an impact with an asteroid or comet, Cabot said.

Laughlin and Cabot cited two factors supporting their theory. The first is that asteroids hitting Venus are usually going faster than those that hit Earth, launching even more material. The second is that a huge fraction of the ejected material from Venus would have come close to Earth and the moon.

“There is a commensurability between the orbits of Venus and Earth that provides a ready route for rocks blasted off Venus to travel to Earth’s vicinity,” said Laughlin, who is professor of astronomy and astrophysics at Yale. “The moon’s gravity then aids in sweeping up some of these Venusian arrivals.”

Upcoming missions to the moon could give Cabot and Laughlin their answer soon. The researchers said NASA’s Artemis program is the perfect opportunity to collect and analyze unprecedented amounts of lunar soil.

Laughlin said there are several standard chemical analyses that can pinpoint the origin of moon rocks, including any that came from Venus. Different ratios of specific elements and isotopes offer a kind of fingerprint for each planet in the solar system.

“An ancient fragment of Venus would contain a wealth of information,” Laughlin said. “Venus’ history is closely tied to important topics in planetary science, including the past influx of asteroids and comets, atmospheric histories of the inner planets, and the abundance of liquid water.”