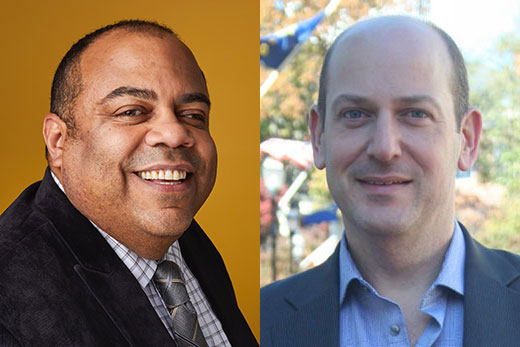 Eric K. Ward, executive director of the Western States Center, will be the guest speaker for Emory’s 12th annual Rothschild Lecture on Thursday, Oct. 29 at 7:30 p.m. With roots in community organizing and civil rights work, Ward has been a leading voice in national discussions on how to combat hate violence and preserve democratic institutions, governance and inclusive societies.

His presentation, “Skin in the Game: American Jews, Whiteness and the Contemporary Movement for Racial Justice,” will be conducted virtually over Zoom.

Rather than following a traditional lecture format, the program will be a conversation between Ward and Eric L. Goldstein, director of the Tam Institute for Jewish Studies at Emory and author of “The Price of Whiteness: Jews, Race and American Identity.”

Ward and Goldstein will discuss the historical contexts, current challenges and future possibilities that together reflect Jews’ complex and often contradictory place in America’s racial terrain. They also will consider the connections between antisemitism and white nationalist ideology in the United States. More broadly, the program will explore where American Jews stand in relation to the nation’s reckoning with the issues of race, white privilege and inequality, and what stake they have in this process.

The Rothschild Memorial Lecture was established in 2007 to honor the late Rabbi Jacob M. Rothschild, the spiritual leader of The Temple, Atlanta’s oldest Jewish congregation, and a voice for social change in the city and throughout the South. Each year the Rothschild Lecture features a guest scholar speaking on a topic relevant to Rothschild’s life and work, such as Jewish ethics, Jewish social movements, modern Judaism or southern Jewish history.

The Rothschild Lecture is sponsored by the Tam Institute for Jewish Studies, one of the leading research and teaching institutions for Jewish Studies in the South. Co-sponsors include the Department of Religion, the Center for Ethics, the Office of Spiritual and Religious Life, the Office of Diversity, Equity and Inclusion, the Hightower Fund and the Fox Center for Humanistic Inquiry.

For complete information, visit the Tam Institute for Jewish Studies.