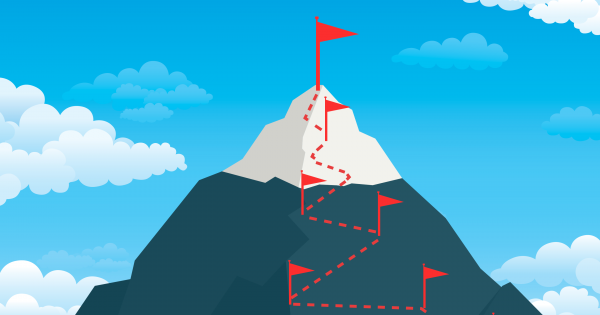 People have been formulating weight-loss plans for centuries. In 1087, William the Conqueror replaced food with alcohol and slimmed down enough to resume riding his horse. England’s William Banting published one of the first diet manuals in 1863, “Letter on Corpulence,” in which he advocated for replacing bread, butter, milk, sugar, and potatoes with lean meats, vegetables, dry toast, and “good claret, sherry, or Madeira.” With that simple prescription he lost 50 pounds in less than a year.

But the real challenge isn’t finding a diet, whether it’s paleo, low-carb, or wine-based; it’s sticking to it. “It’s really hard to maintain a healthy weight, to keep healthy eating habits,” says Kosuke Uetake, an associate professor of marketing at Yale SOM. In a recent study, Uetake and Nathan Yang of McGill University used data from a diet app to understand the most effective ways to set and reach weight-loss goals. Their conclusion was that small, short-term goals that shifted as a dieter made progress helped them reach their long-term goals.

Uetake and Yang collected information on roughly 36,000 active users of the app Lose It!, which converts weight-loss goals into daily calorie budgets; users can then track themselves against their daily budget based on what they eat and how much they exercise.

In the most basic analysis of the data, Uetake and Yang found two notable relationships. First, despite goals being entirely self-imposed, people take the daily budgets seriously: there was heavy “bunching” of users right below their daily suggested calorie intake, indicating people either reduce their consumption or increase their exercise if they see that they’re about to overshoot their goal.

“Even though there was no kind of punishment attached to going over the budget, people worked to follow it,” Uetake said.

Second, those who achieved their daily goals appeared more likely to meet subsequent goals, week to week and month to month. “We saw this positive spillover where short-term success led to longer-term success.”

From this quantitative foundation, Uetake and Yang built a model to explore how small variations in goal design could potentially influence motivation and outcomes. They found, first, that adaptive goals, which get more or less challenging over time, are more beneficial than static goals. (This process of “dynamic difficulty adjustment” is integral to the addictive pull of video games.) They also found that challenging goals are most useful for people who recently either experienced setbacks or made significant progress—those at each end of the achievement spectrum. And people with the highest body-mass index (BMI) demonstrated the greatest progress when given challenging goals. Finally, the most effective goals vary in their aims, sometimes focusing on consumption targets, other times on exercise targets.

“How do we set goals when we face a difficult task? We use data taken from the activity of real people to help them set more realistic goals—goals that they can actually achieve.”

Though this work and its findings are rooted in weight loss, Uetake says that the implications extend into virtually any realm in which goal design plays a central role. One important application, he suggests, is the world of consumer finance. “If people have a debt to pay, what’s the most effective way to structure their repayment plan?”

Another application could be energy consumption. In this case, individuals set goals to reduce the amount of energy they use but regularly fail to meet those goals, in part because there are no consequences for exceeding the target.

Education, especially among younger kids, is also a fruitful area for further research. What tools can be taken from these findings and used to keep student motivation from flagging? Keeping kids engaged, notes Uetake, is of particular importance when they are learning partially or entirely online.

Generally, any part of life that demands self-discipline and long-term planning could benefit from the methods applied in this work. “How do we set goals when we face a difficult task?” Uetake said. “In this case, we want to use data taken from the activity of real people to help them set more realistic goals—goals that they can actually achieve.”