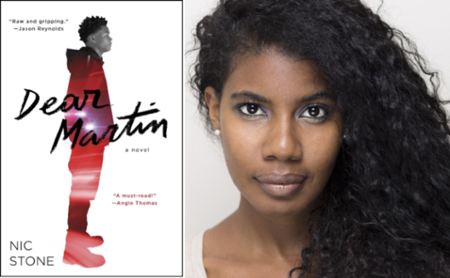 New York Times best-selling author of young adult and middle grade fiction, whose work has been translated into six languages, Andrea Nicole Livingstone – known as Nic Stone – talked about her journey as a writer during a Zoom session with students from the Southern Illinois University Edwardsville East St. Louis Charter High School (CHS).

“We at the SIUE East St. Louis Charter High School are elated to welcome our special guest Nic Stone,” said CHS English teacher Bridget Nelson. “During the national pandemic we are facing, our students need and deserve creative opportunities to connect. This virtual visit with Nic Stone is an extraordinary opportunity. She is a rock star writer of young adult fiction, who creates characters that we so desperately need in our classrooms today.”

Stone, daughter of a retired veteran police officer, is best known for her debut novel “Dear Martin,” a soul-wrenching and brutally honest conversation to Dr. Martin Luther King Jr. about race relations in the U.S. since his death. The sequel, “Dear Justyce” published Sept. 9, talks about race, racism, police brutality and more in letters to “Justyce” from a teen in the American juvenile system.

“Hosting Nic Stone while our CHS students are doing remote learning from home offered a creative opportunity inspired with hope,” said CHS Director Gina Jeffries, EdD. “Each student was provided a copy of the book, ‘Dear Martin’ prior to Stone’s virtual visit.”

“From kindergarten through eighth grade, I was an avid reader,” said Stone. “I loved popular book series such as Encyclopedia Brown, because I loved seeing a kid have that kind of power. It wasn’t until I turned 13 years old that it occurred to me that I never saw any reflection of myself in the books I was reading.”

During high school, Stone said she was introduced to three Black literary characters that she found substantially lacking.

“One was an escaped slave named Jim, headed up a river with a white boy in ‘The Adventures of Huckleberry Finn’ by Mark Twain, and his vernacular was very difficult for me to read,” she confessed.

“The second African American character I met was a man accused of a terrible, terrible crime. His name was Tom Robinson in ‘To Kill a Mockingbird,’ and he suffered a terrible fate. The third one was Crooks, and his role in ‘Of Mice and Men’ by John Steinbeck was so minor that most people don’t recall him.”

It was when Stone went to Spelman College, a private Black women’s school in her hometown of Atlanta, that she met who she calls the “Glorious Greats.”

“I met amazing women like Zora Neal Hurston, Toni Morrison, Alice Walker and Nella Larsen who created astounding works of literature and fiction,” boasted Stone. “Still, as much as I loved reading these authors, I didn’t identify with their experiences.”

Stone continued that she was at age 27 when she read Veronica Roth’s trilogy, “Divergent.”

“It was my first time ever reading a series where the African American character lived all the way through to the end!” said the 35-year-old. “Seeing a Black girl in a popular book series and getting to play a pivotal and heroic role, sparked something in me. It made me think that maybe I could do something like this.”

Stone encouraged CHS students to follow their passions into a career of their own choosing.

“I love story-telling. Not only do I get to tell stories, I get paid for it,” she exclaimed. “Those of you who are passionate about creating music, poetry, art, touchdowns or whatever it is, you can turn it into a career path, depending on how bad you want it.

“The world is changing. People are wanting more voices like ours. So, get to it!”

The SIUE Charter High School is a school-of-choice for families in the East St. Louis School District 189. The mission of the Southern Illinois University Edwardsville East St. Louis Charter High School is to prepare students who are career- and college-ready upon graduation. To achieve this mission, the school and its staff will positively impact the educational and economic lives of East St. Louis, Illinois youth through individualized instruction in core academic subjects, exploration of career interests and aptitudes, assistance in realizing students’ talents, high academic goals, and expectations that graduates will become competitive employees for the 21st century.

Photo:
Nick Stone is a New York Times best-selling author of young adult and middle grade fiction, whose work has been translated into six languages.