CHAMPAIGN, Ill. — The banyan fig tree Ficus microcarpa is famous for its aerial roots, which sprout from branches and eventually reach the soil. The tree also has a unique relationship with a wasp that has coevolved with it and is the only insect that can pollinate it.

In a new study, researchers identify regions in the banyan fig’s genome that promote the development of its unusual aerial roots and enhance its ability to signal its wasp pollinator. 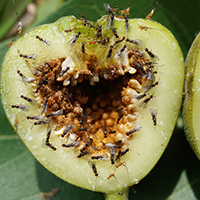 Each type of banyan tree has a distinctive fig and is pollinated by a single species of wasp that has coevolved with it. Pictured is the fig of Ficus hispida and its pollinator, the wasp Ceratosolen solmsi marchali.

The study, published in the journal Cell, also identifies a sex-determining region in a related fig tree, Ficus hispida. Unlike F. microcarpa, which produces aerial roots and bears male and female flowers on the same tree, F. hispida produces distinct male and female trees and no aerial roots.

Understanding the evolutionary history of Ficus species and their wasp pollinators is important because their ability to produce large fruits in a variety of habitats makes them a keystone species in most tropical forests, said Ray Ming, a plant biology professor at the University of Illinois, Urbana-Champaign who led the study with Jin Chen, of the Chinese Academy of Sciences. Figs are known to sustain at least 1,200 bird and mammal species. Fig trees were among the earliest domesticated crops and appear as sacred symbols in Hinduism, Buddhism and other spiritual traditions.

The relationship between figs and wasps also presents an intriguing scientific challenge. The body shapes and sizes of the wasps correspond exactly to those of the fig fruits, and each species of fig produces a unique perfume to attract its specific wasp pollinator.

To better understand these evolutionary developments, Ming and his colleagues analyzed the genomes of the two fig species, along with that of a wasp that pollinates the banyan tree.

“When we sequenced the trees’ genomes, we found more segmental duplications in the genome of the banyan tree than in F. hispida, the fig without the aerial roots,” Ming said. “Those duplicated regions account for about 27% of the genome.”

The duplications increased the number of genes involved in the synthesis and transport of auxins, a class of hormones that promote plant growth. The duplicated regions also contained genes involved in plant immunity, nutrition and the production of volatile organic compounds that signal pollinators. 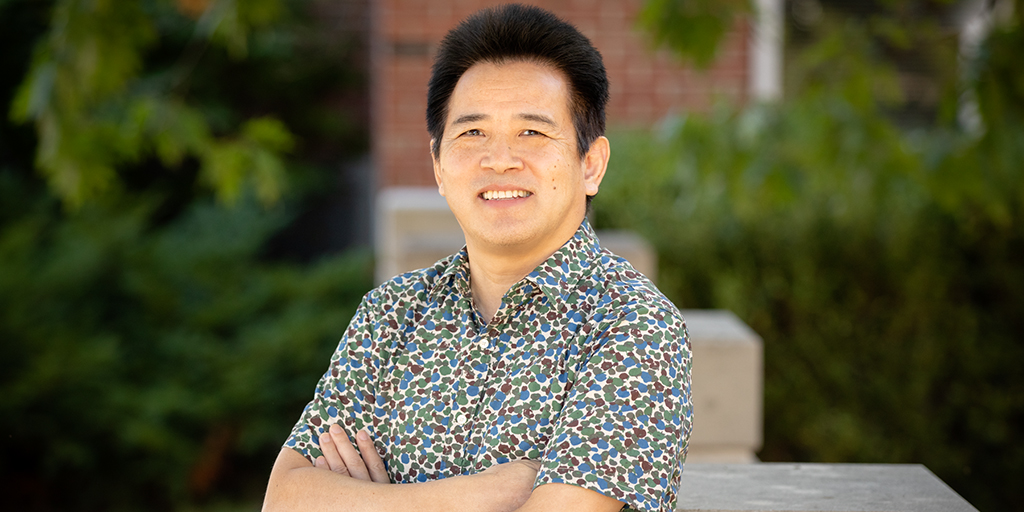 Ray Ming, a professor of plant biology at the University of Illinois, Urbana Champaign, led a genomic study of the banyan tree, Ficus macrocarpa, and its key pollinator, a wasp.

“The levels of auxin in the aerial roots are five times higher than in the leaves of trees with or without aerial roots,” Ming said. The elevated auxin levels appear to have triggered aerial root production. The duplicated regions also include genes that code for a light receptor that accelerates auxin production.

Ming and his colleagues also discovered a Y chromosome-specific gene that is expressed only in male plants of F. hispida and three other fig species that produce separate male and female plants, a condition known as dioecy.

“This gene had been duplicated twice in the dioecious genomes, giving the plants three copies of the gene. But Ficus species that have male and female flowers together on one plant have only one copy of this gene,” Ming said. “This strongly suggests that this gene is a dominant factor affecting sex determination.”