Dr. John C. McManus, Curators’ Distinguished Professor of history at Missouri S&T, has been awarded the seventh annual Gilder Lehrman Prize for Military History for Fire and Fortitude: The US Army in the Pacific War, 1941-1943 (Dutton-Penguin). The $50,000 prize is awarded by the Gilder Lehrman Institute of American History to recognize the best book in the field of military history published in English during the previous calendar year.

The recorded award program will be featured on the Gilder Lehrman Institute and the New-York Historical Society websites on Nov. 5.

“McManus’s Fire and Fortitude is military history at its best, vividly narrated, full of human drama and heroism, restoring to view a painful but important dimension of the American fight in the Pacific in World War II,” says James Basker, president of the Gilder Lehrman Institute of American History. “Every student of history will find it riveting.”

The award is designed to draw public attention to military history as an important staple of education in the areas of international relations, diplomacy and conflict studies, and as a subject in which any educated citizen should be interested. The institute recognizes that the study of the steps to war, conduct of military campaigns, and diplomatic responses to war can play an essential role in the quest for a more peaceable future.

In writing Fire and Fortitude, McManus says his intention was to broaden our historical perspective and enhance our understanding of the Pacific/Asia theater in World War II. 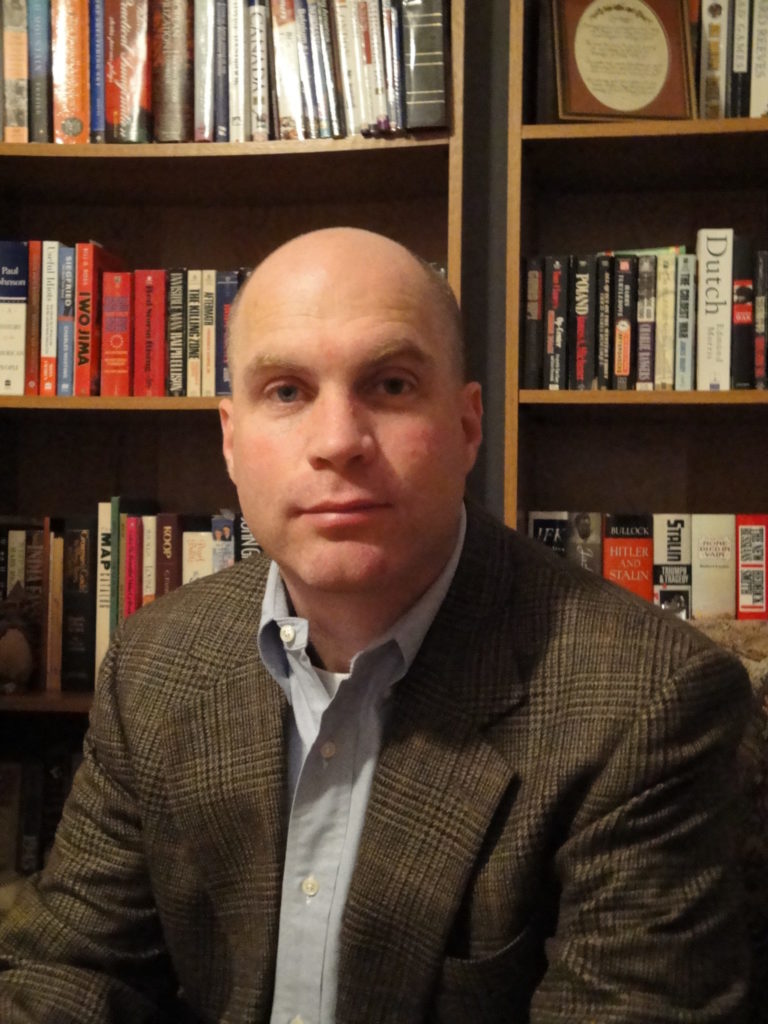 “The army that fought Japan was the third-largest American ground force ever sent overseas in time of war, and yet few World War II historians have ever delved into its incredible history,” says McManus. “I discovered tremendous amounts of new, original source material and came to realize that the Pacific War set the tone for so much subsequent American history.”

Publishers in the United States and the United Kingdom submitted 76 books for consideration for the prize.

“We were hugely impressed with the six books on our shortlist, but McManus’ work stood out, and it more than satisfied each of our four key criteria, which are that it must be historically ground-breaking, excellently researched, extremely well written and accessible to the general reader,” says Andrew Roberts, chair of the judging committee and visiting professor at the War Studies Department of King’s College London.

“I am deeply honored and humbled to receive this year’s Gilder Lehrman Prize for Military History,” says McManus. “As a professional military historian, I have long revered this award for its leading role in the recognition of cutting-edge work in the field. I want to express my sincere thanks to the jurors, the Gilder Lehrman Institute and the New-York Historical Society.”

“The scholarship and approachability of John McManus will have a lasting influence on the intellectual development of our students who take his courses,” says Dr. Mohammad Dehghani, chancellor of Missouri S&T. “We want all our graduates, regardless of their field, to understand the importance of large-scale conflict and war in history and how it can influence the global challenges that often come with their careers. John McManus highlights that critical thinking in his courses. I cannot think of anyone more deserving of the Gilder Lehrman Prize for Military History.”

McManus is the author of 13 non-fiction historical books about the American military experience, and the 640-page Fire and Fortitude is his first book to examine the Army’s experience in the Pacific and East Asia. He spent most of his last academic year as a visiting professor at the U.S. Naval Academy in Annapolis, Maryland, where he held the Dr. Leo A. Shifrin Distinguished Chair of Military History. That experience with the Naval Academy helped inform his research for Fire and Fortitude, he says.

McManus is in frequent demand as a speaker and expert commentator on 20th and 21st century American war, appearing on Fox News, C-Span, the Military Channel, the Discovery Channel, the Smithsonian Network, History and PBS.

McManus joined the Missouri S&T faculty in 2000. He holds a Ph.D. in history from the University of Tennessee and a master of arts in history and a bachelor of journalism degree, both from the University of Missouri-Columbia. He received the 2012 Missouri Governor’s Award for Excellence in Teaching, and in 2014 he was named Curators’ Distinguished Professor of history and political science by the University of Missouri System – the first S&T faculty member in a humanities or social sciences field to achieve that distinction. McManus was named to the UM System 2019-20 class of the Presidential Engagement Fellows based on his demonstrated excellence and ability to communicate his research to the public.

About Missouri University of Science and Technology
Founded in 1870 as the University of Missouri School of Mines and Metallurgy, Missouri University of Science and Technology (Missouri S&T) is a STEM-focused research university of more than 8,000 students and part of the four-campus University of Missouri System. Located in Rolla, Missouri S&T offers 99 different degree programs in 40 areas of study, including engineering, the sciences, education, business and information technology, the humanities, and the liberal arts. Missouri S&T is known globally and is highly ranked for providing a high return on tuition investment, exceptional career opportunities for graduates, and an emphasis on applied, hands-on learning through student design teams and cooperative education and internship opportunities. For more information about Missouri S&T, visit mst.edu