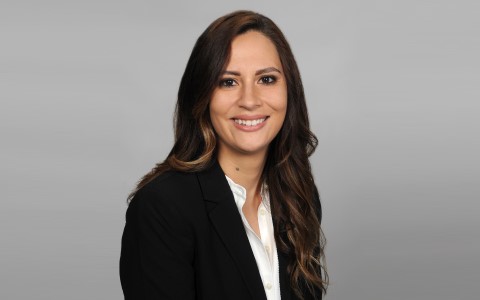 Most aspiring professors follow a pretty typical path — a master’s degree at a suitable institution, followed immediately by a long-planned PhD. But Carmen Sanchez never aspired to be a professor. At least, not at first.

After completing a bachelor’s in business administration at the University of Texas at El Paso, Sanchez did what most of her fellow graduates did.  She hit the interview trail, landing a job as an associate national bank examiner for the U.S. Treasury. It was an amazing opportunity that took her to the center of Washington and the heart of the banking world. And then, the Great Recession, and the world turned upside down.

For the next several years, she lived out of her suitcase, travelling across the country, meeting with bankers and working to identify risks in the national banking system. It was during that time she began to notice a disconnect between what she had learned in school and what she saw on a daily basis. “I was taught that businesses are rational and people will behave rationally, no matter what,” said Sanchez. But the more she waded through the aftermath of the housing bubble and subprime mortgage crisis, the more she realized that wasn’t the case.

“It was really a good experience,” said Sanchez, “because it made me interested in learning why people behave irrationally.” That interest led to a few night classes at a local college and eventually a PhD in social and personality psychology from Cornell University.

At Cornell, she began exploring the development of misbeliefs. “My research focuses on the quality of people’s decisions and what psychological processes lead people to form false beliefs about themselves and the world around them,” said Sanchez. Through her research she hoped to understand why people commit these self-assessment errors and what could be done to prevent them from becoming big mistakes.

She started by mapping out the trajectory of performance, confidence and overconfidence as people engage in new probabilistic tasks. In her research, she found that people who are just beginning to learn are, for the most part, pretty modest in their self-assessments. If you plotted it out on a grid, the line that indicated how well they were learning and how well they thought they were learning weren’t far apart. With just a little knowledge under their belt, however, these new learners enter what Sanchez calls the “beginner’s bubble,” where they often become overconfident, perhaps putting too much faith in faulty theories or ignoring feedback that could help them avoid mistakes.

Sanchez says metacognition could be one tool that help fix that. It’s a big name for a simple process, in which learners are encouraged to reflect on their thoughts as they’re doing something. “People don’t do that very much,” said Sanchez. “But I have found that if you can get people to engage in metacognition, it makes them less confident as they’re learning about something.” This could help prevent overconfidence and lead to more effective learning.

Sanchez will be putting that theory to work in Business Dynamics a course that explores the functional areas of business and engages students in a dynamic simulation to understand their interdependencies. “I really like that type of learning, because I think people don’t use it enough in universities, and it’s what life is,” explained Sanchez. “You’re never really going to know the correct outcome until you’ve done it and you’re like, ‘Oh, I shouldn’t have done that. I should have done something else.’ And you can’t go back and un-do it.”

The new assistant professor says she felt immediately welcome the moment she sat foot on campus. “I liked that there are people doing interesting research, and they welcome somebody with a very non-traditional background,” said Sanchez, who’s excited to put that background to work, shaping the next generation of leaders. “I’ve had a really long journey to get to this point, so it’s like finally enjoying what you’ve worked so hard to do.”